The Indian Space Research Organisation (ISRO) on Thursday said that the Chandrayaan-2 orbiter detected a series of solar flares using Solar X-ray Monitor (XSM) of Chandrayaan 2 and the US’ Geostationary Operational Environmental Satellite (GOES-15) between September 30 to October 1. 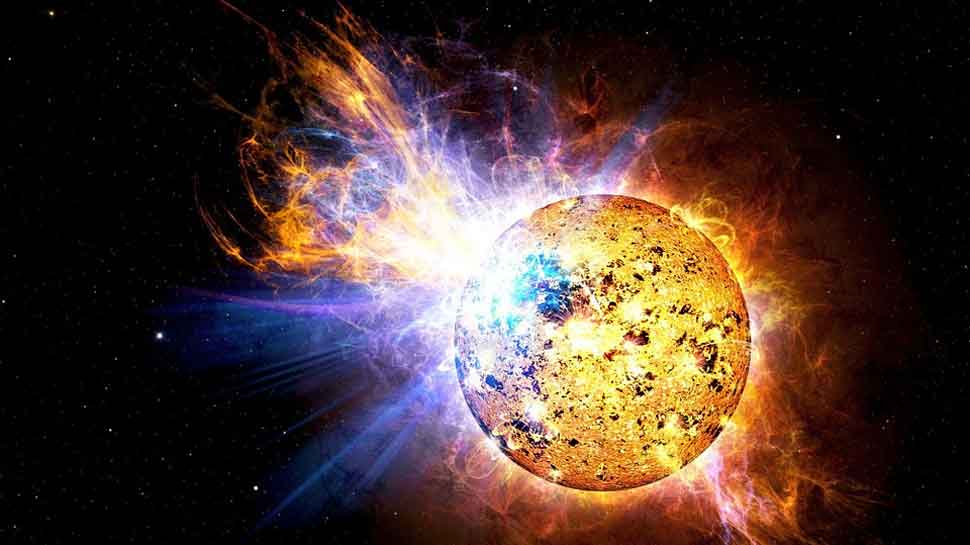 New Delhi: The Indian Space Research Organisation (ISRO) on Thursday said that the Chandrayaan-2 orbiter detected a series of solar flares using Solar X-ray Monitor (XSM) of Chandrayaan 2 and the US’ Geostationary Operational Environmental Satellite (GOES-15) between September 30 to October 1.

In its latest update on India's second moon mission, ISRO took to Twitter to explain the phenomena of solar flares (a sudden explosion of energy near the Sun's surface), which take place over short periods, emit a large amount of radiation. The solar activity which has been recorded by ISRO happens once in eleven years. The sun goes from solar maxima and solar minima during this cycle, punctuated with large x-ray intensity variations in a few minutes to hours. This whole process is called solar flares.

#ISRO
Solar flare measured by XSM instrument of #Chandrayaan2 and GOES-15 of US during 30th September to 1st October 2019.
Clearly XSM provides very detailed information which will help in understanding various processes on the Sun.
Details at https://t.co/OccLzYCfZp pic.twitter.com/SBb9ZztZlv

The Chandrayaan-2 orbiter carries two instruments, Chandrayaan 2 Large Area Soft X-ray Spectrometer (CLASS) and Solar X-ray Monitor (XSM) to measure the lunar elemental composition and the solar flares detected by XSM demonstrate the spacecraft's ability to ultimately test for the presence of minerals on the Moon.

However, ISRO said it won't be able to do much with the current set of readings because of unfavourable angles at which the orbiter, the Moon and the Sun are currently placed. However, the new finding is still significant as it tests an important piece of equipment onboard the Chandrayaan-2 orbiter.

The comparison showed the difference between Chandrayaan 2 and GOES-15 reports and proved that India’s XSM technology is far much better and can detect the sun’s intensity variations. The GOES-15 data was shared by the United States’ National Center for Environmental Information of National Oceanic (NCEINO) and Atmospheric Administration.

Apart from the better sensitivity, India’s XSM technology has measured the spectrum of solar X-ray energy range of 1-15 keV, which is called as the highest energy resolution recorded by any broadband solar X-ray spectrometer. Notably. it recorded the energy range over 1-second intervals.