Chandrayaan-2 will now approach the Moon on August 20 and finally land near the south pole of the moon on September 7.

Chandrayaan-2, India's second lunar mission, is now yet another step closer to the Moon, the Indian Space Research Organisation (ISRO) informed on Wednesday. The spacecraft successfully carried out the crucial process of trans-lunar injection, moving from earth`s orbit towards the moon. Chandrayaan-2 will now approach the Moon on August 20 and finally land near the south pole of the moon on September 7.

“The final orbit raising manoeuvre of Chandrayaan-2 spacecraft was successfully carried out today (August 14, 2019) at 02:21 am IST. During this maneuver, the spacecraft's liquid engine was fired for about 1203 seconds. With this, Chandrayaan-2 entered the Lunar Transfer Trajectory. Earlier, the spacecraft’s orbit was progressively increased five times during July 23 to August 06, 2019,” said ISRO.

As the final orbit raising manoeuvre was underway, ISRO chairman Dr K Sivan accompanied with other scientists say down at the Control Centre in ISRO Telemetry, Tracking and Command Network (ISTRAC), Bengaluru. ISTRAC provides tracking support for all the satellite and launch vehicle missions of ISRO. The space agency later to took to Twitter to share a snapshot from the Control Center. 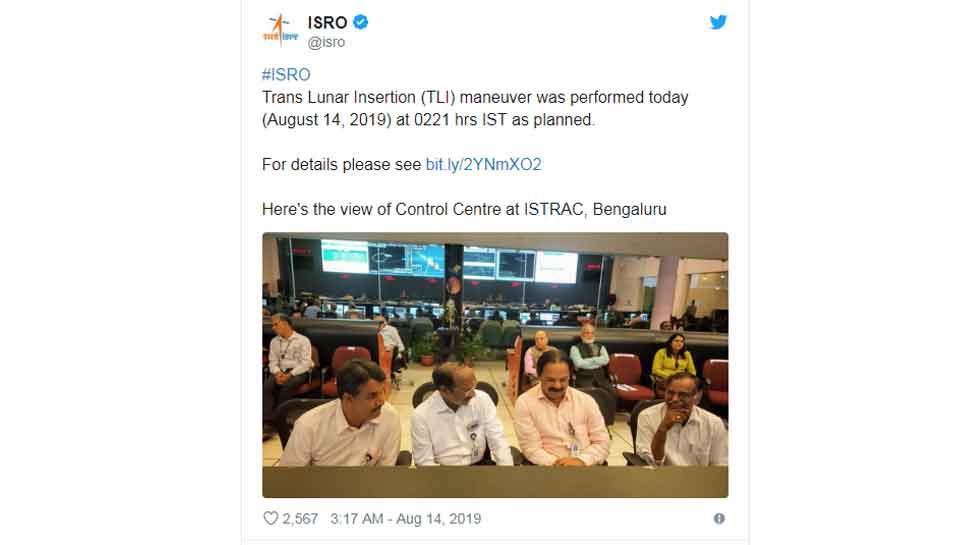 ISRO scientists are continuously monitoring the spacecraft from ground systems.

“The health of the spacecraft is being continuously monitored from the Mission Operations Complex (MOX) at ISRO Telemetry, Tracking and Command Network (ISTRAC) in Bengaluru with support from Indian Deep Space Network (IDSN) antennas at Byalalu, near Bengaluru. Since its launch on July 22, 2019 by GSLV MkIII-M1 vehicle, all systems onboard Chandrayaan-2 spacecraft are performing normal,” said the space agency.

“Chandrayaan-2 will approach Moon on August 20, 2019 and the spacecraft's liquid engine will be fired again to insert the spacecraft into a lunar orbit,” it added.

“Following this, there will be further four orbit maneuvers to make the spacecraft enter into its final orbit passing over the lunar poles at a distance of about 100 km from the Moon’s surface,” said ISRO. 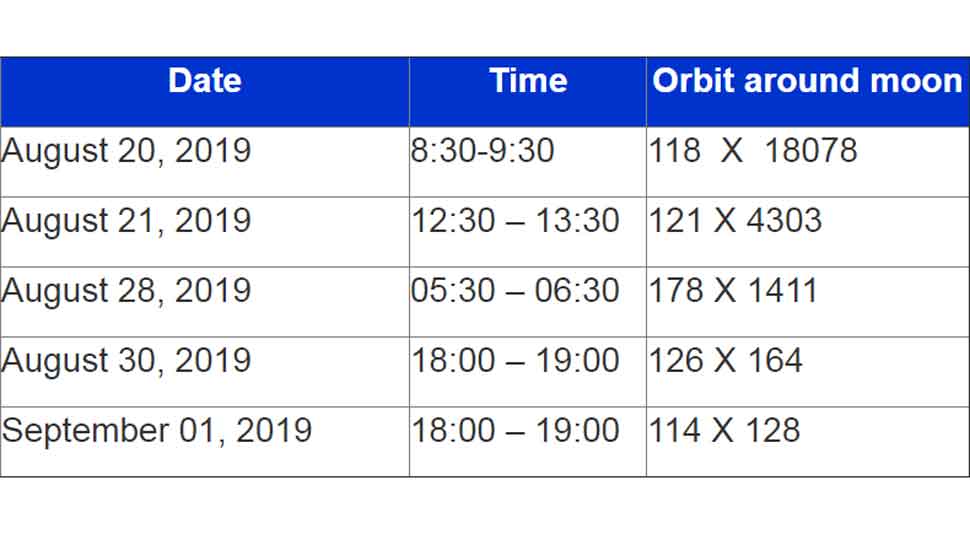 The Vikram lander will separate from the orbiter on September 2, 2019. “Two orbit maneuvers will be performed on the lander before the initiation of powered descent to make a soft landing on the lunar surface on September 7, 2019,” said ISRO.