The two teams had drawn 1-1 in the first leg encounter in Chennai earlier. 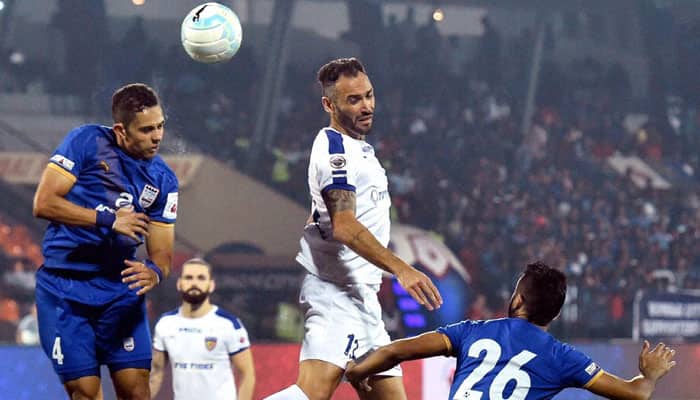 Mumbai scored a goal in each half through Matias Defederico (32nd minute) and Krisztian Vadocz (60th), and should have won by a much bigger margin but for India captain Sunil Chhetri muffing two of the three gilt-edged chances in the last 10 minutes of the game.

Mumbai did not start the game at the frenetic pace they set during their 5-0 thrashing of Kerala Blasters at this same ground four days ago, but they clearly had the better of the exchanges with their slick passing upfront.

Chhetri, Defederico and captain Diego Forlan combined beautifully right through the game for Mumbai. The two teams had drawn 1-1 in the first leg encounter in Chennai earlier.

The victory, Mumbai's sixth from 13 games, took their points tally to 22 which was enough for them to qualify for the play-offs after failing to do so in 2014 and 2015.

In the last edition, teams gaining 22 points had made it to the play-offs and in 2014 even teams having 19 points could qualify for the semis.

Chennaiyin's qualifying hopes, on the other hand, have receded considerably after suffering their fourth loss in 12 games. They remain in seventh spot with 14 points.

Mumbai will conclude their round robin engagements with a home game against Delhi Dynamos on December 3. Chennaiyin have two more games in hand, against North East United at home on November 26 followed by their last league game against FC Goa away from home on December 1.

Mumbai took the upper hand as they had done against the Blasters quite early but without the pace they had set in the previous game.

The home team started slightly on the wrong foot when Brazilian defender Gerson Vieira picked up a yellow card quite early for a foul on Chennaiyin's Norwegian recruit John Arne Riise. But that was the minor hiccup they had after which they took control of the proceedings and dominated the show.

After coming near to scoring twice through Forlan and Chhetri whose cheeky back-heel was blocked by rival custodian Karanjit Singh, Mumbai took the lead with 13 minutes remaining for the first half to end.

Defederico was on hand inside the box to net the ball in with a left-footed shot following a delightful short passing game between Vadocz and Chhetri on the left side of the box. Chhetri back-passed to the Argentine who slotted the ball in, to the delight of the noisy supporters of the home team.

Although Chennaiyin had a couple of chances to find the target, Mumbai came closest to increase their lead when their hat-trick hero against the Blasters, marquee player Forlan, nearly scoring with another of his free-kick specials.

But for the alertness and alacrity shown by Chennaiyin custodian Karanjit Singh, who palmed the Forlan 'special' for a throw-in, the visitors' citadel would have fallen for the second time just before the opening half ended.

Crossing over, Chennaiyin had more of the play than in the first half but they just could not break through the Mumbai defence and on the contrary conceded the second goal too with just under half an hour left on the clock.

A power-packed volley by Vadocz from the top of the box after he chested the long back-pass from Forlan near the right corner flag could not be stopped by Karanjit despite him getting both hands to the ball with a dive to the right.

Mumbai, then, sat back and defended well, but also got three golden chances to go further ahead, only to see Chhetri muff two of them.