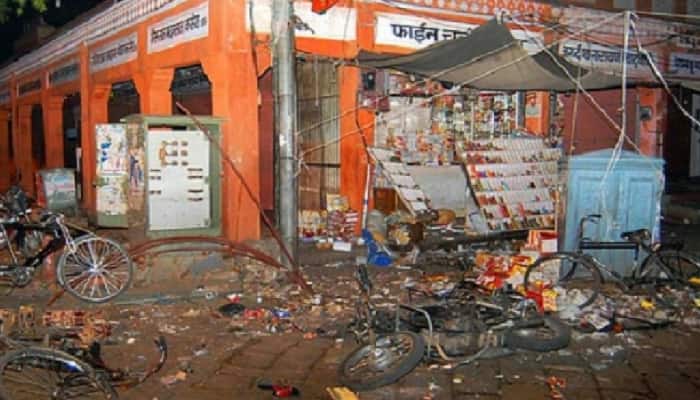 A special court on Wednesday (December 18) convicted four people in connection with the 2008 Jaipur serial blast case. The blast had killed 72 people and left over 170 injured. The court acquited one person giving him the benefit of doubt. All the four have been convicted under sections of IPC, Prevention of Unlawful Activities Act, Explosives Act, and PDPP Act.

A Bangladesh court upheld death sentences on Thursday for three members of an outlawed Islamist militant group in connection with a grenade attack on the British ambassador in 2004.

Al-Qaeda in the Indian Subcontinent's Bangladesh chief and his top advisor were among 12 militants belonging to the group arrested by police which also seized a huge cache of explosives, foiling a major attack planned for the end of Ramzan, officials said on Thursday.

Harkat-ul-Jihad-al-Islami operative Tariq Qasmi was on Friday awarded life imprisonment for his role in 2007 blasts in Gorakhpur and Lucknow by a local court which held him guilty of sedition and keeping explosives.

A key operative of outlawed Islamist militant outfit HuJI, who was sentenced to death in absentia for a deadly blast here, has been arrested in Bangladesh.

A top leader of the banned militant outfit Harkat-ul-Jihad (HuJI), who was sentenced to death in absentia for the 2001 blast in Dhaka, has been arrested.

One suspected terrorist who was injured in the October 2 explosion here, in which two others were killed, was on Tuesday arrested taking the total number of those apprehended by the police in the case to four while the CID is on the lookout for two more suspects.

Amid calls for handing over the Burdwan blast probe to the National Investigation Agency, the CID on Monday made another arrest, taking the number of arrests in the case to three.

Two more suspects have been arrested by the police in connection with the Burdwan blast, as per news reports on Monday.

Two women were arrested and remanded to police custody for two weeks on Sunday in connection with the explosion at Khagragarh here that left two suspected militants dead.

Special court hearing 2007 Faizabad and Lucknow blasts cases, rejected plea of UP Police to summon Sub Inspector of Kashmir police to prove that accused had a link with a slain HuJI operative.

UP govt`s plea to withdraw a case against two alleged HuJI operatives in connection with seizure of explosives in Barabanki after the 2007 Gorakhpur blasts was rejected by a court.

UP govt will appeal against Barabanki court`s decision: Azam Khan

UP government would appeal against the Barabanki court`s decision rejecting its plea to withdraw case against two alleged HuJI operatives in connection with seizure of explosives.

In a setback to Uttar Pradesh government, a court in Barabanki, Friday, rejected its plea seeking to withdraw the case against 2007 Gorakhpur blasts accused Tariq Quasmi and Khalid Mujahid, who are alleged to be HuJI operatives.

UP govt`s release of "innocent" youths booked on terror charges came under fire from Kalyan Singh who said SP supremo Mulayam Singh Yadav was hoping to get PM`s post with "appeasement politics".

A HuJI militant wanted in the 2001 abduction case of shoe baron Partha Pratim Roy Burman has been arrested by the Special Task Force (STF) of Kolkata Police from the Port area.

NIA probe into `plot` will take some time: Police

Police said the NIA probe into the alleged plot to target politicians and some journalists by 15 terror suspects of LeT and HuJI would take time.

No decision yet on extending coronavirus lockdown in India, over 1 lakh tested for COVID-19: Centre