On 26th July at 1 pm, sink your teeth into yet another blockbuster with Bad Boys for Life that chronicles the shenanigans of a zabardast cop Jodi. 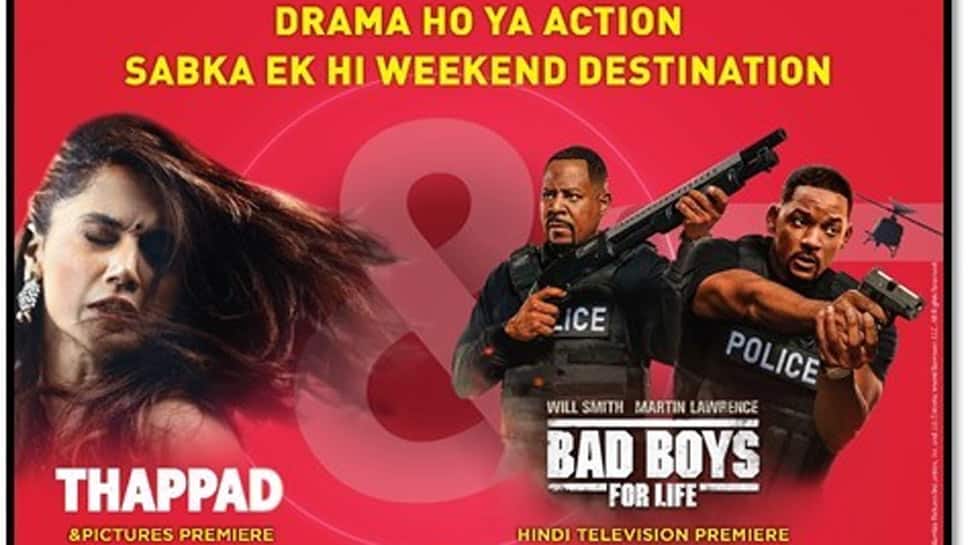 Ready to take a break from your everyday routine and get transported into the world of drama, action and entertainment? Well, you're in luck because &pictures is bringing to your television screens two films that promise to help you bid adieu to a boring weekend in perfect movie style!

On 25th July, the channel premieres Thappad, a film that will get you to retrospect the true meaning of love and respect, and on 26th July, get transported into the thrilling world of cops, action and car chases with Bad Boys for Life.

Questioning 'Bina Respect Kya Hai Pyaar', director Anubhav Sinha's Thappad is a journey of Amrita, a talented, educated and a loving housewife who was happy with her life being surrounded with her family and husband's priorities until the day her husband slaps her in front of a crowd.

Amrita's perfect relationship is shattered, and she was reminded of all the times she downplayed her role as an equal partner in the relationship and questioned all that her marriage stood for. This heart-warming and striking film stars Taapsee Pannu, Pavail Gulati, Dia Mirza, Ratna Pathak Shah, Tanvi Azmi, Maya Sarao, and Kumud Mishra in pivotal roles. Witness the most significant movie of the year on Saturday, 25th July at 8 pm.

Taapsee Pannu shares her experience and says, “Working on Thappad has been an overwhelming experience for me. The movie sheds light upon a crucial issue that I always wanted to personally address. I feel any kind of violence can change a person completely either making you withdraw into a cocoon or emerge stronger and It's the same with Amrita's character. Getting into Amrita's skin was quite a challenge and it got me claustrophobic. My impulsive mindset took time to attune to Amrita's calm worldview. But, her righteousness, her maturity to handle every situation, and an infectious calmness on the outside made me grow as a person and made me look at things differently. Thappad gives voice to a topic that has been hushed for years now; with the &pictures premiere, we are hoping to bring notice, open conversations, help people identify and not accept those minor verbal 'Thappads' thrown their way.”

Elaborating on the experience of making Thappad, Anubhav Sinha said, “Thappad has been a challenging experience for me and It's something that I am immensely proud of. The movie tackles plethora of issues in our society that have unfortunately been normalized. A whole lot of us indulge in gaslighting without realizing it. And, in order to correct our behaviour, we need to first know that it is incorrect. We have worked hard to encapsulate the right messaging and emotion throughout our film; it is important, now more than ever for the film and what it stands for, to reach as many people as possible. The response so far has been phenomenal. I am grateful to be a part of an era where storytelling as well as audiences, are evolved enough to embrace such movies that are against the tide.”

On 26th July at 1 pm, sink your teeth into yet another blockbuster with Bad Boys for Life that chronicles the shenanigans of a zabardast cop Jodi. Comedy, larger than life action, adrenaline thumping car chases, and a drug mafia – the film has all the entertainment elements. Starring Will Smith and Martin Lawrence, the movie follows the encounters of detectives Mike Lowrey and Marcus Burnett who team up for one last ride as they go up against the vicious leader of a Miami drug cartel.

Drama ho ya action, Sabka Ek Hi Weekend Destination and we've given you enough reason to tune in. So this weekend, don't miss watching these two blockbusters only on &pictures!