Priyanka Gandhi sits on 'dharna' after detention in UP, vows to meet victims of Sonebhadra massacre

Priyanka was detained at the Chunar Guest House after she was stopped from going to Murtiya village in Sonebhadra district. The police, however, denied that she had been arrested. 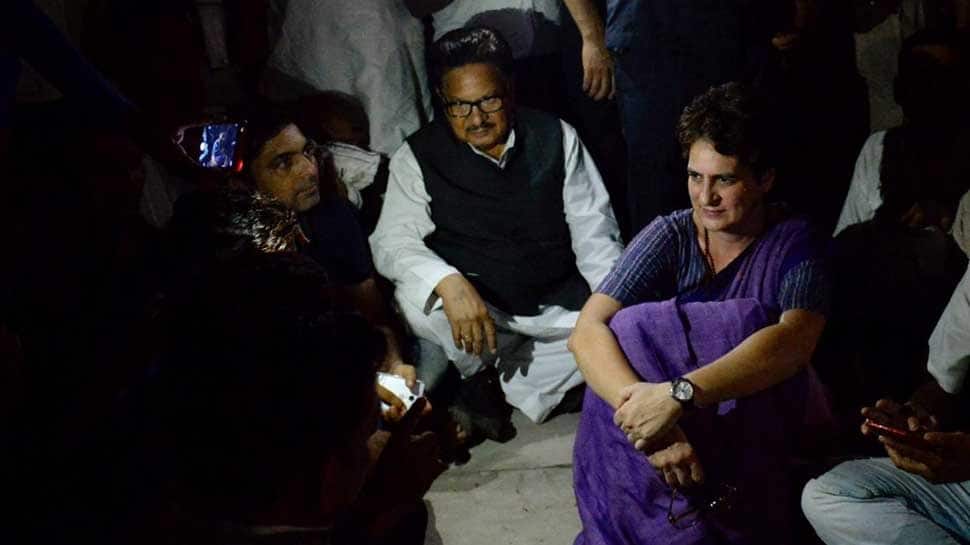 Mirzapur: Congress general secretary Priyanka Gandhi, who was detained in Narayanpur by police earlier on Friday while she was on her way to meet victims of Sonbhadra's firing case, sat on a ''dharna'' against her detention by the Yogi Adityanath-led BJP government in Uttar Pradesh.

According to reports, Priyanka Gandhi Vadra along with her party workers sat on a dharna and refused to leave the Chunar Guest House where she was taken following her detention.

Talking to reporters, she also described the killings of members of the Gond tribe in Sonbhadra as "massacre" and demanded Rs 25 lakh as compensation for each of their families.

According to Congress sources, Priyanka remains firm on meeting the victims` families in Sonbhadra.

Mirzapur: Priyanka Gandhi Vadra,Congress Gen Secy for UP(East)&party workers continue to sit on dharna at Chunar Guest House.She was detained in Narayanpur by police earlier today while she was on her way to meet victims of Sonbhadra's firing case. pic.twitter.com/VBFjJ29upL

Congress MLA Lalitesh Pati Tripathi said that Priyanka was firm on going to the site where the killings took place in the clash between Gonds and Gujjars.

"Priyanka Gandhi was asked to fill a bail bond of Rs 50,000, which she rejected, saying that even if she had to stay here for 10 days, she shall stay but she would not leave till the time she meets the family members of the victims. There is no question of any bail," Tripathi said.

The Congress workers also alleged that the district administration has cut off the electricity and water supply to the guest house where Priyanka has been detained since the afternoon. No arrangements have been made for food either.

Mirzapur: Congress workers allege deliberate power cut at Chunar Guest House by administration; say, "They want to trouble Priyanka Gandhi & Congress workers so that we leave the place. But we will spend the night here with candles & continue our protest." https://t.co/Ld4QBIlnFN

Priyanka was detained at the Chunar Guest House after she was stopped from going to Murtiya village in Sonebhadra district. The police, however, denied that she had been arrested.

The Congress leader arrived in Varanasi on Friday morning and met the injured persons admitted to the Trauma Centre of the Banaras Hindu University. When she proceeded towards Sonebhadra, her convoy was stopped on the Mirzapur border. A defiant Priyanka then squatted on the ground with the Congress workers and was later taken away in a government vehicle to Chunar.

"I don't know where are they taking me. We are ready to go anywhere," she said.

She asked the officials for written orders as to why she was being prevented from going to Sonebhadra. "I just want to meet the families of the victims. I am willing to take only four people with me because I do not want to defy the prohibitory orders and yet the district administration is not allowing us," she complained.

At least 10 people, including three women, died and over 24 were injured in a clash between Gond and Gujjar communities over a land dispute in Sonebhadra on Wednesday.

Speaking to party supporters at the guest house, Priyanka Gandhi said that atrocities were being carried out on the tribals in the state.

"They were killed because they were demanding their rights, they were fighting for their land," she said.

Priyanka added that three days before Wednesday`s incident, the villagers had informed the police about the brewing tension in the area. "But the police did not pay heed to their complaints. They even did not take any action when such incidents were happening there," she said.

She said that she wanted to meet the victims` families to assure them that someone was standing with them in these difficult times. She said, "Massacre is happening here. And I was going there to show the entire country what happened in Sonebhadra."

She later tweeted that the state`s BJP government had failed to curb violence and was instead curbing her rights to stand up for the rights of the victims. Even while she remained under detention, scores of Congress workers and local people gathered at the guest house to meet Priyanka with whom she held discussions on several issues.

Earlier in the day, before being taken to Chunar, Priyanka said that she would not be cowed down by the police action which she argued had no legal basis.

Soon after news came in that Priyanka has been whisked off to Chunar, Congress leaders staged a dharna at the Gandhi statue in Lucknow and outside the BJP headquarters in New Delhi.

A Samajwadi Party delegation, which was on its way to Sonebhadra, was also prevented from going there. A Trinamool Congress team is set to go to Sonebhadra on Saturday.

Priyanka`s brother and senior Congress leader Rahul Gandhi described her detention as "disturbing". "This arbitrary application of power, to prevent her from meeting families of the 10 Adivasi farmers brutally gunned down for refusing to vacate their own land, reveals the BJP government`s increasing insecurity in UP," he tweeted.

The police have arrested 24 people in connection with the violence in Sonebhadra. A case has been filed against 78 people.

Priyanka husband Robert Vadra also hit out at the state government over her detention. "In Uttar Pradesh is it a crime to stand with the poor? Can somebody tell me what is the crime of Priyanka," Vadra asked in a Facebook post.