In a strict order, local authorities on Friday warned that the stringent Gangsters Act would be invoked against those who sacrifice cow, buffalo, camel, or ox as 'Qurbani' during Bakr Id on Saturday. 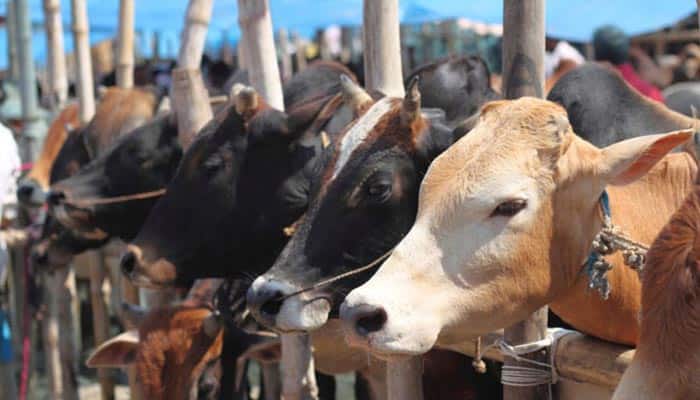 Lucknow: The stringent Gangsters Act would be invoked against those who sacrifice cow, buffalo, camel, or ox as 'Qurbani' during Bakr Id in Uttar Pradesh's Sambhal district on Saturday.

"I have passed the order that in the time of Bakr-Id, from Septemeber 2 to Septemebr 4, no cow, buffalo, ox and camel will be sacrificed. If it`s done, then under Gangster Act, that particular person will be convicted, with immediate effect."," SDM Sambhal Rashid Khan said.

Besides, the movable and immovable property of those involved in such a sacrifice will be impounded, he said.

The SHOs have been asked to take strict action against anyone sacrificing these animals on the festival day, the SDM said.

Till last year, animal sacrifice was carried out at government slaughterhouses but their closure has created a difficult situation in UP and confusion is prevailing among the Muslim community on the eve of Bakr Id.

After coming to power, the Uttar Pradesh government led by Chief Minister Yogi Adityantah ordered closure of all illegal slaughter houses in the state and stated there would be no compromise on illegal abattoirs.

Khan said the SHOs have been asked to extensively tour their areas and see that no such incident takes place from September 2 to 4.

The Uttar Pradesh police had issued a terse warning in June that those involved in cow slaughter and illegal transport of milch animals will be booked under the stringent National Security Act (NSA) and Gangsters Act.

Under NSA, the government can detain a person for as long as it wishes and the authorities need not disclose the grounds of detention.

A person booked under the provision of Gangsters Act becomes part of a gang listed in police records. It entitles the police to keep track of those booked under the Act and issue summons to them for attendance at the local police station for questioning even if no fresh case is lodged against them.

The Act permits the police to seek remand of an accused for a maximum of 60 days as compared to a maximum of 14 days under normal circumstances.

A government order to ban cow slaughter and illegal transport of milch animals was passed during the previous SP government in the state but was never strictly implemented.

The Centre has recently issued a notification imposing a blanket ban on the slaughtering of cattle - cows, bulls, buffaloes, camels, heifers - bought from animal markets.

Id-ul-Zuha, also known as Sacrifice Feast or Bakr Id, is the second of two Muslim holidays celebrated worldwide each year. It honors the willingness of Ibrahim (Abraham) to sacrifice his son, as an act of obedience to God`s command.

In commemoration of this, an animal is sacrificed and divided into three parts: One third of the share is given to the poor and needy; another third is given to relatives, friends and neighbors; and the remaining third is retained by the family.

Like Eid al-Fitr, Id-ul-Zuha or Eid al-Adha begins with a prayer of two rakats, followed by a sermon.

Traditionally, the festival of Eid al-Adha is celebrated two days after the beginning of the Hajj pilgrimage. The starting date of this festival depends on the sighting of the new crescent moon. It begins on the 10th day of the one of the holiest months of the Islam calendar.