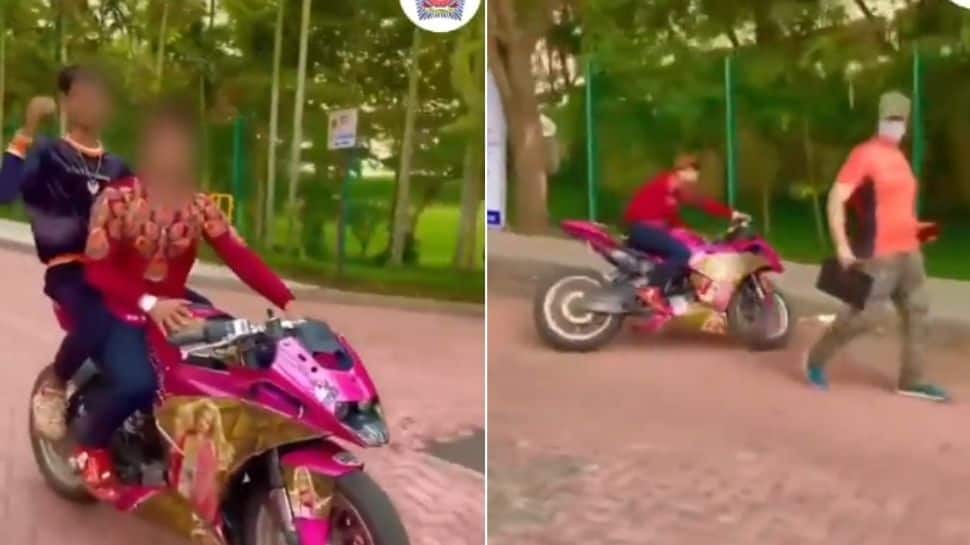 New Delhi: Mumbai Police, which is often known for its witty takes on social media, has yet again used its medium to warn citizens about rash driving. Sharing a video on its Twitter handle of two men performing a stunt on a moving motorcycle, the Mumbai police notified people of the consequences of such actions.

While the faces have been blurred of the two riders, they can be seen driving on a pink bike that has an image of Barbie on it. Warning people, the Mumbai Police used its own version of Aqua's 'Barbie Girl' song and tweeted, "Attention barbie girl, it's the real world Life isn't plastic- safety's fantastic!"

The video shows two men lip-syncing to a dialogue, and as part of the stunt, the man enacts stabbing the driver of the pillion. He is then thrown on the ground by the driver, who then himself pretends to fall on the road with the bike.

Take a look at the video here:

Take precaution, life is your creation.

Both the accused booked under section 279 of IPC & MVA sections for dangerous & rash driving. License suspended too! #TunesOfLaw #RoadSafety pic.twitter.com/OGxYBS0XKi

The Mumbai police informed that both the men involved in the act have been booked for rash driving. The tweet read, “Both the accused booked under section 279 of IPC & MVA sections for dangerous & rash driving. License suspended too!”

The video has gone viral, where one of the netizens hailed Mumbai police for its “fun way” of making the public obey traffic rules. "Oh the Barbie girl song was very famous hit track in my teenage days, Mumbai police you are nowadays so entertaining also," the user tweeted.