COVID-19 is rising in Bengal due to ‘outsiders’ brought by BJP: Mamata Banerjee

Speaking at a rally in the Dabgram-Fulbari constituency in the Jalpaiguri district, the TMC supremo ridiculed PM Modi's recent claim that BJP had already won 100 seats in the four phases of the election to the 294-seat assembly. 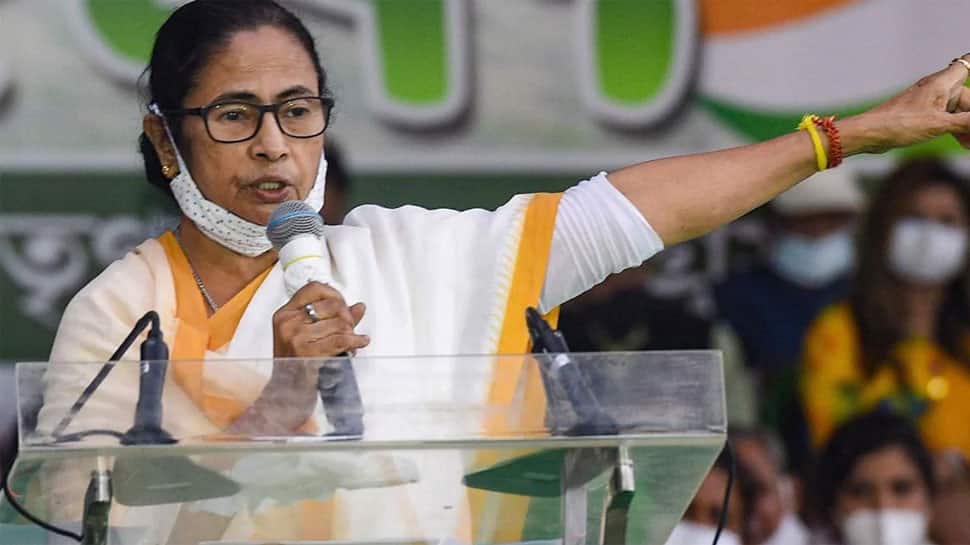 Haringhata/Jalpaiguri: West Bengal Chief Minister Mamata Banerjee has alleged that the BJP has contributed to the recent rise in Covid-19 cases in the state by bringing "outsiders in large numbers" for campaigning during the ongoing assembly elections.

BJP has strongly slammed Mamata Banerjee for her remark blaming the saffron party for rising COVID-19 cases. ''I am shocked to hear that she is abusing Modi Ji & Amit Shah Ji for the pandemic. But this is Mamata Banerjee's 'sanskar'. Modi Ji addresses her as 'didi' but she abuses our leadership from public platforms,'' Union Minister Smriti Irani said.

I am shocked to hear that she is abusing Modi Ji & Amit Shah Ji for the pandemic. But this is Mamata Banerjee's 'sanskar'. Modi Ji addresses her as 'didi' but she abuses our leadership from public platforms: Union Minister Smriti Irani (14.04) https://t.co/QFPJXHXIj6 pic.twitter.com/Zym7glx2PR

The Trinamool Congress supremo made these remarks while addressing a poll rally on Wednesday during which she accused the BJP-led government at the Centre of not responding to the state's plea to vaccinate a majority of people, which could have helped contain the spread of the disease.

"They (BJP leaders) have brought outsiders for campaigning and contributed to the rise in Covid cases. We had managed to get hold of the Covid situation, they made it complicated," CM Mamata said at the public meeting.

The Chief Minister further attacked the BJP claiming that its leaders sport saffron attire but they have no idea about the significance of the colour. Apparently referring to Prime Minister Narendra Modi who is now seen in a long white beard, she said that no one becomes Nobel laureate poet Rabindranath Tagore by sporting a beard like him.

The TMC boss also said that the BJP will not be able to win 70 out of the total 294 seats in the state where an eight-phase election is being held. “It is normal in a democracy that there will be political fights, but it is not proper if democracy itself is stifled,” she said.

Speaking on the Election Commission's decision to prohibit her from campaigning for 24 hours, she said, "Is it a fault to ask Hindus, Muslims and others to vote together? What about Prime Minister Narendra Modi who is mocking me at every election meeting? Why is he not banned from campaigning?" she asked.

Banerjee said, "I was banned from campaigning for 24 hours. What wrong had I done? I only asked minorities to vote unitedly. I told this to the Hindus as well. The ban had forced me to cancel four meetings."

The Election Commission had barred Banerjee from campaigning for 24 hours from Monday 8 pm for her remarks against the central forces and a statement that had alleged religious overtones.

"I have been suffering from a foot injury for the last one month and 10 days. But I did not rest. This injury was inflicted on me so that I am not able to campaign," she said. Banerjee suffered a foot injury after a fall while campaigning in her constituency Nandigram on March 10. Since then, she is seeking votes for her party sitting in a wheelchair.

The TMC supremo has been alleging that her injury was the result of a conspiracy hatched by the BJP. However, the Election Commission has concluded that it was an accident and not a planned attack.

"I am fighting against those who do not know what is culture. Bangla is everything to us. Bengal is our motherland, our place of work. I appeal to you (people) to protect the honour of Bengal. Bengal cannot be made another Gujarat," Banerjee said.

The TMC supremo claimed that the BJP talks about religion but orchestrate riots, while people of different faiths live peacefully together in West Bengal. "Sometimes I am called a Hindu, sometimes a Muslim. Muslims take part in the Durga puja festival. Hindus attend Muslim religious events. Unlike the BJP, we do not indulge in politics in the name of religion," she said.

Banerjee said that there is a Dargah, a shrine built on the grave of a Muslim saint, inside the compound of the Belur Math, the headquarters of the Ramakrishna Mission, and she came to know from the monks that it was there since the time of Swami Vivekananda.

Claiming that the Prime Minister used to take her to Bangladesh during his official visits but did not do it this time, she wondered whether it was due to vote-bank politics.

PM Modi offered prayers at a Matua temple in Bangladesh's Orakandi, the birthplace of Hindu mystic figure and the Matua community's spiritual guru Harichand Thakur during his visit to the country last month.

With an estimated population of three million in the state, the Matua people who are refugees from erstwhile East Pakistan (now Bangladesh) are politically significant. Both the BJP and TMC are trying to woo them.

Earlier, speaking at a rally in the Dabgram-Fulbari constituency in the Jalpaiguri district, the TMC supremo ridiculed PM Modi's recent claim that BJP had already won 100 seats in the four phases of the election to the 294-seat assembly.

"I can say that after the elections are over, BJP will not even get 70 out of the total 294 seats," she said. The TMC supremo said that Union Home Minister Amit Shah recently commented whether she disliked "chaiwallahs", in an apparent reference to the prime minister.

"I love chaiwallahs and they love me. I love tea garden workers and you BJP give promises of opening closed tea garden before Lok Sabha elections and then forget them," she said.