Here's the schedule for by-election to fill casual vacancies in WB assembly.

NEW DELHI: The Election Commission on Saturday announced the schedule for holding the by-election to fill casual vacancies in the State Legislative Assembly of West Bengal. 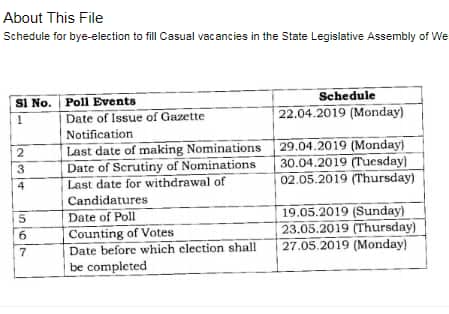 The Election Commission had on Friday announced the schedule for holding the bye-elections in two state assemblies of Uttar Pradesh and West Bengal respectively.

According to the apex poll body, the by-polls to Agra North and Darjeeling assembly constituencies will be held onMay 19 and the results would be announced on May 23.

In its notification, the EC announced the schedule to fill casual vacancies from 89 - Agra and 23 -Darjeeling Assembly Constituencies in the State Legislative Assemblies of Uttar Pradesh and West Bengal respectively.