All opposition parties have extended their support to the West Bengal Chief Minister. 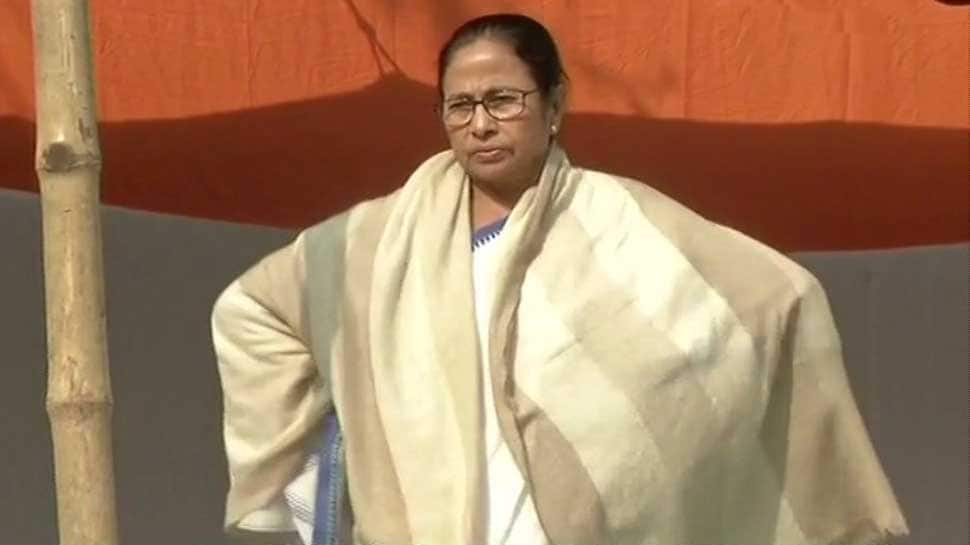 KOLKATA: West Bengal Chief Minister Mamata Banerjee continued her sit-in protest against the Bharatiya Janata Party-led Centre on Monday over the CBI's attempt to question the Kolkata Police chief in connection with chit fund scams. Mamata has maintained that she will continue her "Satyagraha" till the country and its Constitution are "saved".

A full-blown face-off between Mamata government and the Centre erupted as a CBI team moved to arrest Kolkata Police Commissioner Rajeev Kumar, which in turn were unceremoniously denied entry to Kolkata Police chief`s residence and then detained.

Here are the updates from the tussle between Mamata government and the CBI:

Thank you for being with us!

# Tejashwi Yadav and Kanimozhi meet Mamata Banerjee at the stage where she has been sitting on 'Save the Constitution' dharna since 9 PM on Tuesday.

Kolkata: RJD leader Tejashwi Yadav and DMK leader Kanimozhi meet West Bengal CM Mamata Banerjee at the stage where she has been sitting on 'Save the Constitution' dharna since 9 PM yesterday over CBI issue. pic.twitter.com/xHO611h2AZ

# CBI has filed a contempt plea in the Supreme Court against West Bengal's Chief Secretary, Director General of Police and Kolkata Police Commissioner for wilful and deliberate violation of apex court's orders.

# I am ready to give my life but not compromise. I did not take to the streets when you touched TMC leaders. But I am angry when they tried to insult the chair of the Kolkata Police Commissioner, he is leading the organisation: Mamata Banerjee

# Meanwhile, a BJP office has been vandalised in South Kolkata's Bhawanipore

# In 2014 Congress tweeted Rahul Gandhi's statement that 20 lakh ppl lost their money in chit fund scam in West Bengal. We took oath on May 26,2014 so all these inquiries in Narada, Saradha scams started before us: Ravi Shankar Prasad

# What is happening? A Police Commissioner is sitting on a dharna with politicians? What is the meaning of this? By sitting on dharna West Bengal CM is following the footsteps of Arvind Kejriwal: Union Minister Ravi Shankar Prasad

# Delhi CM Arvind Kejriwal: Whatever Central government did in West Bengal is very dangerous, and against the Constitution and democracy. Every state has an elected government, if PM sends CBI and ED like this and try to scare the officers then this country will not be safe.

# BJP hits back at Mamata Banerjee. Union Minister Prakash Javadekar said this is "not Modi's emergency but Mamata Banerjee's emergency in Bengal. She is on dharna to save herself. There has been a complete break down of Constitutional order in West Bengal: Javadekar."

# Union Minister Smriti Irani: The fact that paramilitary forces had to be deployed for the protection of those officers, who were diligently doing their duty, is for the first time an unprecedented view given to the citizen with regards to the state of anarchy in West Bengal.

# Kolkata Police commissioner Rajeev Kumar has filed a case at Calcutta HC to stop the operation of several CBI notices served between 2017-2018. The matter will be heard on Tuesday.

# Home Minister Rajnath Singh on Monday called the face-off between the Kolkata Police and the Central Bureau of Investigation (CBI) "unfortunate" and "unprecedented". Stating that there may be a constitutional breakdown in West Bengal, the Home Minister said that the Centre has power to maintain normalcy in any part of the country. He also added that the incident is a threat to federal political system of the country. Rajnath had spoken to West Bengal Governor Keshari Nath Tripathi to take stock of the situation. He added that the Home Ministry is closely monitoring the situation.

# Akhilesh Yadav, SP chief: Besides West Bengal, such things have been heard from other states too. BJP and Centre have started misusing CBI as elections are approaching. Not only I, not only Samajwadi Party, but all political parties are saying this. There was CBI row, Centre was scared of a CBI Director, now they are trying to scare everyone using CBI. Who has misused the institutions? If someone has politicised the institutions, it is BJP.

# Ghulam Nabi Azad, Congress: From the day BJP has come to power at the Centre, they have paid very less attention towards working for the country but towards eliminating opposition parties, this has been their focus for the past 5 years. There is no other party more corrupt than BJP

# Farooq Abdullah, National Conference leader: Mamata Banerjee's allegations are correct. This country is in danger as its becoming dictatorial. The Central government is not the master of this country, people are.

# The Home Ministry is closely monitoring the situation in Kolkata. Home Minister Rajnath Singh spoke to Governor of West Bengal Keshari Nath Tripathi to be apprised of the facts of the unprecedented situation of officers CBI officers being manhandled, detained, intimidated and obstructed. West Bengal Governor told Rajnath that he had summoned Chief Secretary and Director General of Police and asked them to take immediate action to resolve the situation.

# The Mamata vs CBI battle echoed in Parliament too with Rajya Sabha being adjourned till 2 pm soon after the proceedings of the day commenced. Lok Sabha has also been adjourned till 12 pm after uproar by Opposition parties.

# Seeking evidence of CBI allegations that the Kolkata police chief may try to destroy electronic evidence related to Saradha chit fund scam, CJI Gogoi said: "If Kolkata Police Commissioner even remotely thinks of destroying evidence, bring the material before this Court. We will come down so heavily on him that he will regret."

# Maharashtra Navnirman Sena backs Mamata. Party chief Raj Thackeray in a statement said: "We applaud and support the stand taken by Mamata Banerjee against the autocracy and tyranny of the Central government. We firmly stand behind her and the fight against this tyranny."

# Chandrababu Naidu held a teleconference with party leaders on Monday. "We are coordinating with all national parties. Will discuss with Opposition leaders in my Delhi visit today. Kolkata rally was successful which is why these revengeful actions against Mamatha Banerjee are being taken," Naidu said.

# Extra security has been deployed at the CBI headquarters in Kolkata to avoid any untoward incident.

West Bengal Chief Minister Mamata Banerjee at 'Save the Constitution' dharna in #Kolkata. She has been staging dharna since last night over CBI issue. pic.twitter.com/rFLuBIghfs

# The BJP will address a press conference on Tuesday over the ongoing tussle between the CBI and state Police Commissioner Rajiv Kumar. "Why was the CBI stopped by police if Kumar has nothing to be afraid of? The CBI has the right to investigate the matter as they were asked to do so by the Supreme Court. Trinamool Congress (TMC) is deliberately blaming Prime Minister Narendra Modi and BJP chief Amit Shah into the matter as they want to politicise the issue," Union Minister of State for Heavy Industries Babul Supriyo said. Supriyo also demanded that President's Rule be imposed in West Bengal.