31 killed, over 60 injured ahead of Eid-ul Azha in road accident in Pakistan

At least 31 people, mostly labourers who were going to their hometown to celebrate Eid-ul Azha, were killed and more than 60 injured on Monday when an overcrowded passenger bus collided with a trailer truck on a highway in Dera Ghazi Khan district of Pakistan's Punjab Province. 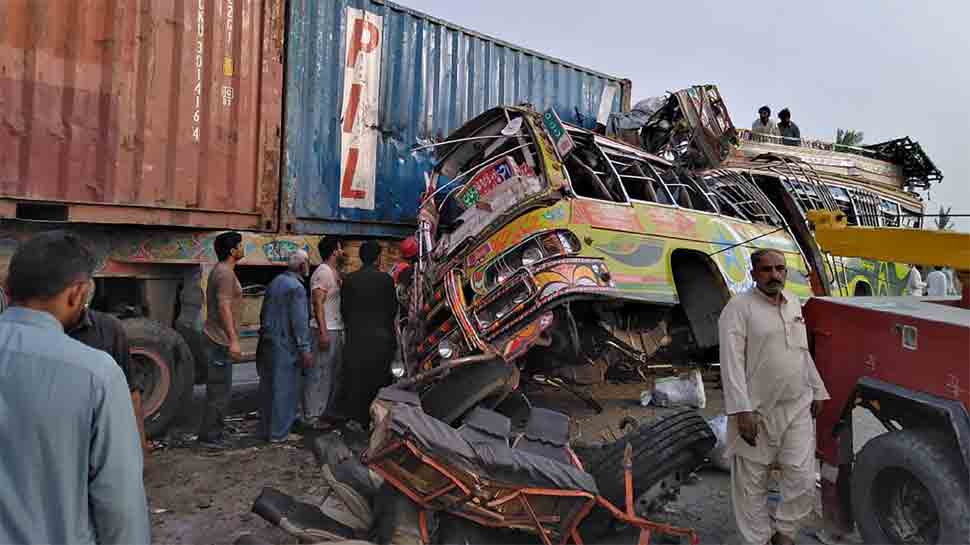 Lahore: At least 31 people, mostly labourers who were going to their hometown to celebrate Eid-ul Azha, were killed and more than 60 injured on Monday when an overcrowded passenger bus collided with a trailer truck on a highway in Dera Ghazi Khan district of Pakistan's Punjab Province.

The bus was en route from Sialkot to Rajanpur when the accident took place on the Indus Highway near Taunsa bypass in Dera Ghazi Khan district, some 430 km from Lahore.

The majority of the passengers were labourers who were going to their hometown to celebrate Eid-ul Azha on Wednesday, officials said.
The injured were shifted to a nearby hospital where medical staff confirmed the death of 18 people upon their arrival.

Minister of Information and Broadcasting of Pakistan Fawad Chaudhry in a tweet confirmed that at least 30 people have lost their lives in the accident near Dera Ghazi Khan. He appealed to public vehicle drivers to drive carefully for the safety of passengers.

District emergency officer rescue Dr Nayyar Alam was quoted as saying by the Geo News that 75 passengers were on board the bus.

At least 31 people were killed and more than 60 were injured in the collision. All the injured have been shifted to Teaching Hospital, the report said.

Quoting an injured passenger a police official said the driver of the bus seemed to have fallen asleep and lost control over the vehicle that caused the accident.

Punjab Chief Minister Usman Buzdar expressed grief over the accident but didn't announce any compensation for the victims.

Interior Minister Sheikh Rashid expressed his sorrow over the deaths in the accident. He said the incident was nothing less than a "calamity" for people going back home for the upcoming holidays.

"May God raise the dead to a higher level in Paradise [and] give the family the courage to bear the trauma," he tweeted.

She said that an emergency had been imposed in the hospitals and the injured were being provided with the "best medical treatment facilities".

"Report of the incident has been sought. The perpetrators of negligence in the accident will be brought to justice," she added.

Opposition Leader in the National Assembly and PML-N President Shehbaz Sharif said he was deeply pained and heart-broken at the tragic loss of precious lives in the road accident.

"Can't imagine the anguish the affected families should be going through. May Allah give them Sabr! They are in our thoughts and prayers," he tweeted.

Traffic accidents are common in Pakistan and most of them are caused due to overspending, bad roads and untrained drivers.