Donald Trump became the first president in US history to be impeached for a second time. 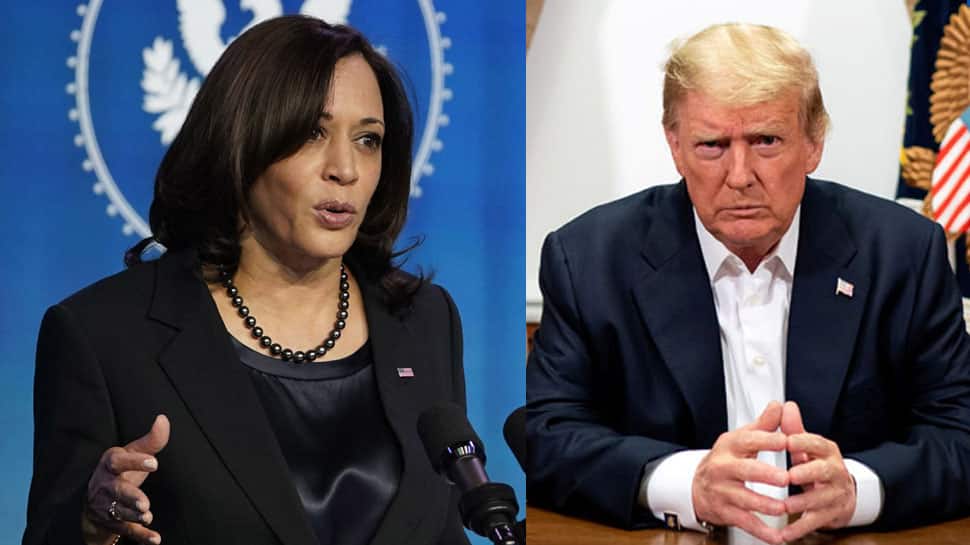 Donald Trump became the first president in the history of US to be impeached for a second time, as 10 of his fellow Republicans joined the Democrats in the House of Representatives to charge him with inciting an insurrection which led to the violent rampage at the Capitol last week.

The votes with 232-197 were moved the motion for impeachment, though it is unlikely that the swift impeachment would lead to Donald Trump`s removal before the end of his four-year term.

READ | Donald Trump impeachment: What will the US House do next, how will it impact outgoing US president

In a surprising twist in the tale, Vice President-elect Kamala Harris had earlier told Donald Trump that she will see him at his trial. In 2019, in a reply to Trump's tweet after she dropped out of the Democratic nomination race she posted the tweet. Trump had made a snide remark saying, "We'll miss you." To this, she replied, "Don’t worry, Mr President. I’ll see you at your trial."

The Senate`s Republican majority leader, Mitch McConnell, has rejected calls from Democratic leaders for a quick impeachment trial, saying there was no way to conclude it before January 20 which is when Trump leaves office.

But a Senate conviction could lead to a vote on banning Donald Trump from running for office again in 2024. The House passed a single article of impeachment - a formal charge - accusing Trump of "incitement of insurrection". At a later ceremony, House Speaker Nancy Pelosi signed the article of impeachment before it is sent to the Senate, saying she did it "sadly, with a heartbroken over what this means to our country."

No US president has ever been removed from office through impeachment. Through three presidents - Trump in 2019, Bill Clinton in 1998 and Andrew Johnson in 1868 - were impeached by the House but acquitted by the Senate.

Trump has been accused of making an incendiary speech which he delivered to thousands of his supporters shortly before they went on a rampage through the Capitol. The mob disrupted the formal certification of Joe Biden`s victory over Donald Trump in the November 3 election and led to the death of five people, including a police officer.

As per reports, Trump's impeachment trial could begin at 1 pm (local time) on Inauguration Day next Wednesday (January 20) as President-elect Joe Biden is being sworn into office. That's according to a timeline of Senate procedure obtained by The Associated Press. It's the possible schedule if House Speaker Nancy Pelosi sends the articles of impeachment to the Senate soon.

Trump was impeached by the House on Wednesday on a single charge of incitement to insurrection after the deadly Capitol siege last week by a pro-Trump mob. Pelosi hasn't said when she'll send the impeachment charge to the Senate. Some Democrats have suggested holding back to allow Biden time to be inaugurated and to start working on his priorities first.

Biden has suggested the Senate could divide its time between the impeachment trial and confirming his Cabinet nominees and working on COVID-19 relief and other issues. Terming last week's violence at the US Capitol a planned criminal act, the President-elect has expressed hope that the Senate will be able to conduct the impeachment trial of Donald Trump while working on other critical issues after a House of Representatives vote made him the first American president ever to be impeached twice.

Ten Republican lawmakers joined the Democrats to impeach Trump for "incitement of insurrection" exactly one week after rioters stormed the US Capitol as the House certified Biden's election victory, making him the first American president to be impeached twice. Trump was impeached the first time in December 2019 for abuse of power and obstruction of Congress for his attempt to pressure Ukraine to investigate Biden's family.

The violence on January 6 temporarily halted the counting of Electoral College votes to certify Biden's win in the November 3 election and resulted in the deaths of five individuals, including a police officer. "Last week, we saw an unprecedented assault on our democracy. It was unlike anything we have witnessed in the 244-year history of our nation," he said.

Windows and doors were destroyed. Offices ransacked. A Capitol Hill police officer was murdered. Another lost his life a few days later. Four other people died in the senseless mayhem of that day, said the next American president. Biden said that the members of the House of Representatives exercised the power granted to them under the US Constitution and voted to impeach and hold the president accountable.

"It was a bipartisan vote cast by members who followed the Constitution and their conscience. The process continues to the Senate," he said. "This nation also remains in the grip of a deadly virus and a reeling economy. I hope that the Senate leadership will find a way to deal with their Constitutional responsibilities on impeachment while also working on the other urgent business of this nation," Biden said.

"From confirmations to key posts such as Secretaries for Homeland Security, State, Defense, Treasury, and Director of National Intelligence, to getting our vaccine program on track, and to get our economy going again. Too many of our fellow Americans have suffered for too long over the past year to delay this urgent work," he said.

"I have often said that there is nothing we can't do if we do it together. And it has never been more critical for us to stand together as a nation than right now. So we must remember who we are as Americans and what we stand for and believe. It's time for us to be what at our best we have always been," Biden said.

Harris said the storming of the Capitol Hill by supporters Trump last week marked an inflection point for America. "Last week, of course, marked an inflection point for our country. I was horrified. As I know you all were by the attack on our Capitol, on our nation's Capital," Harris said at a virtual finance event for the Presidential Inaugural Committee. Harris said the President-elect Biden called it an attack on democracy.

"It was an attack on the rule of law itself. And one of the lessons I hope that all of us take away from it is that our democracy is only as strong as our willingness to fight for it, our ideals are only as strong as our willingness to make them real,? she said hours after Trump's impeachment. "At that time, that meant certifying the results of this election, and to send a message, strong and clear that we will not be deterred, that our democracy will not be derailed. My hope is that the bipartisan spirit, the patriotic spirit that prevailed that night, will mark the beginning of a new era for our country," Harris said.

She said that the American people had been through difficult moments like wars, depressions and great upheavals before. "And there have been times when the fate of our very nation hung on the balance," she said. But America has always prevailed, its democracy has always prevailed, Harris said. "So, I know how horrific the events of January 6 were and I know we all have work to do to reckon with all that happened," she said.