The leaders of the world's 20 major economies warned of the growing risks to the global economy but they stopped short of denouncing protectionism. 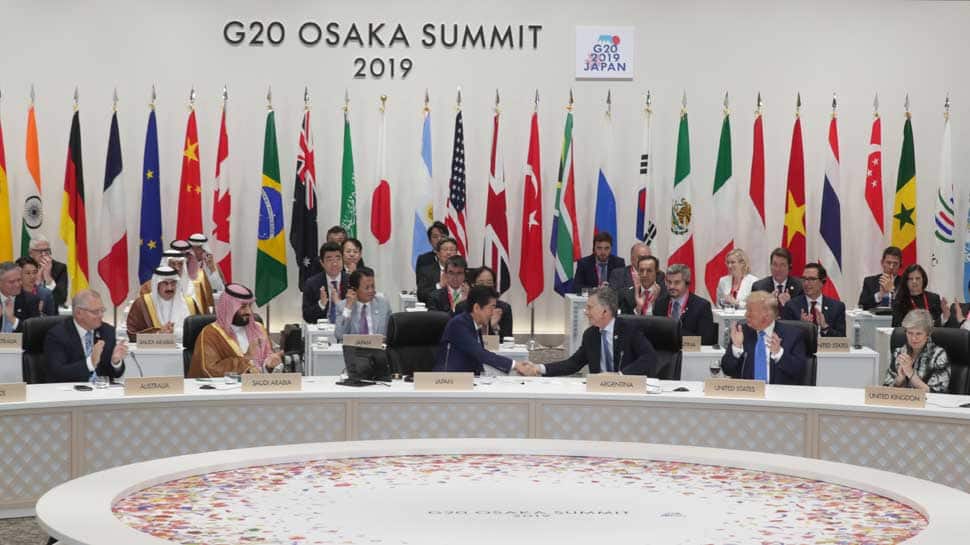 Osaka: The two-day G20 Summit in Japan's Osaka came to end on Saturday with the participating nations declaring support for the principles of free trade and economic growth amid global trade-related tensions.

The leaders of the world's 20 major economies also warned of the growing risks to the global economy but they stopped short of denouncing protectionism.

In a joint declaration issued at the closure of the two-day meeting in Japan's western city of Osaka, the leaders said global growth remained low and risks were tilted to the downside, as trade and geopolitical tensions have grown.

''We strive to realise a free, fair, non-discriminatory, transparent, predictable and stable trade and investment environment, and to keep our markets open," G20 member states said in a second successive summit statement that refrained from urging the need to resist protectionism.

Addressing a press conference, Japanese Prime Minister Shinzo Abe informed that the G20 leaders agreed on the need to boost economic growth and expressed concerns about globalization and the world trade system.

According to Efe news, the Japanese PM said that the G20 members reaffirmed their support for "the fundamental principles backing a free trade system" and placed special emphasis on achieving open, free and non-discriminatory markets and a level-playing field.

Abe said that even though it was difficult to find one solution to so many global challenges at once, the group had managed to show a common will in many areas.

The leaders also recognized the clear "downside risks" to the global economy according to Abe, who said the member-countries had agreed to spearhead economic growth and stressed the need to reform the World Trade Organization.

The final statement signed by the leaders flags the intensification of geopolitical and trade tensions but does not include any mention of growing protectionism, in the context of the growing trade tensions between the US, China and other countries.

The joint declaration said global growth was stabilizing and was expected to register a small rise later this year and in 2020, adding that the bloc was committed to confronting the risks associated with the tensions and launch more actions if needed.

Established in 1999, the G20 is a central forum for international cooperation on financial and economic issues. It comprises 19 countries plus the European Union (EU).