Nawaz Sharif was sentenced to 10 years in jail in a corruption case while daughter Maryam has been given a 7-year jail term. 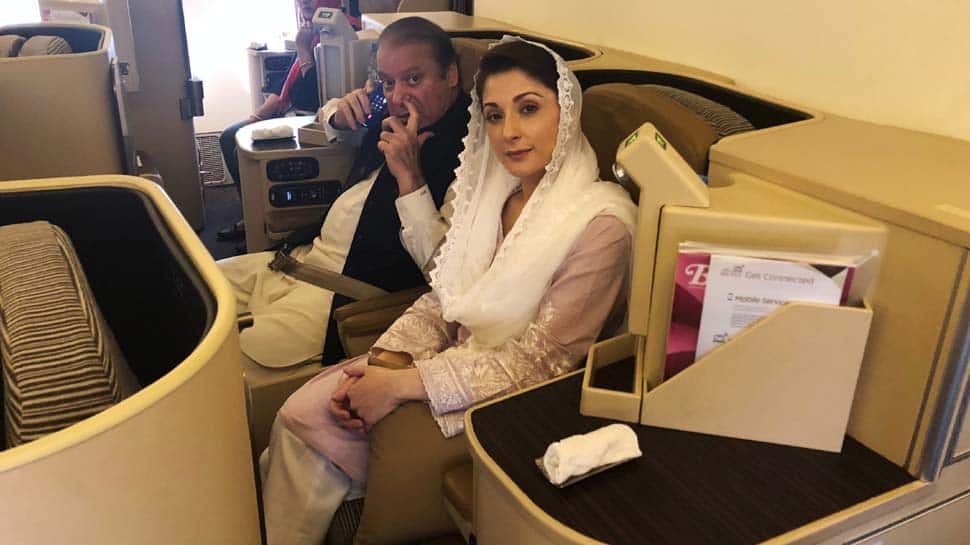 The father-daughter duo surrendered before the National Accountability Bureau (NAB) - the country's anti-graft body -  without any resistance. Their passports were confiscated.

A private chopper transferred them to Islamabad, from where they will be taken to Rawalpindi Jail.

The duo was found guilty in the Avenfield reference case on July 6.

Thousands of supporters and PML-N members came out on the streets as Sharif and his daughter landed in Lahore.

Although he has made several trips to Pakistan in the last months - primarily for case hearings, Sharif has mainly been in London to be by his ailing wife Kulsoom Nawaz who is in a hospital here.

This picture will be marked as the ugliest face of Pakistani Establishment for a hundred years pic.twitter.com/lZ0H3uW92w

Both Sharif and his daughter are expected to land in Lahore at 1815hrs (1845hrs IST) and will be arrested immediately.

Here are the live and latest developments from the day:

* Over 10,000 police and army personnel are on standby in case of any eventualities.

* A massive number of protestors, including PML-N workers, have gathered outside the airport and trying to block Sharif-Maryam's transfer to Rawalpindi prison. Pakistani police and security agencies have started a crackdown on supporters of ousted Prime Minister Nawaz Sharif to stop them from reaching the airport to receive their leader.

* #WATCH Nawaz Sharif and Maryam Nawaz have been arrested upon landing in Lahore from Abu Dhabi pic.twitter.com/W95bR4rkYp

* Mobile phone services have been discontinued in Lahore.

* Due to bad weather, Sharif and Maryam will not be transferred by the two helicopters kept on stand-by. A small private helicopter has been pressed into service to transfer the two.

* Sharif and Maryam being taken to prison, say sources. Their passports have been confiscated.

* A team from Pakistan's Federal Investigation Agency (FIA) have taken the passports from the Sharif and his daughter, after which they were seated in the Hajj Lounge of the airport, reported Geo TV.

*The National Accountability Bureau had earlier said that Sharif and Maryam would be taken into custody immediately upon their arrival at the Lahore airport.

*"So many people coming out on streets for Sharif and Maryam is unprecedented. By returning to Pakistan, Sharif has played a winning shot. The most popular politcian Benazir Bhutto too refrained from returning home, fearing jail-term," said Geo TV Journalist Nusrat Amin.

* Speaking to Zee News, Geo TV Journalist Nusrat Amin confirmed that the flight has landed in Lahore and arrest is imminent. "Authorities are highly tight-lipped about the next sequence of actions. Thousands of PML-N supporters have landed up outside the airport," he added.

* The flight landed at Lahore's Allama Iqbal International Airport shortly at around 9:20 IST.

* Amid situation tense in Lahore, incidents of stone pelting, the flight has been diverted to Islamabad, say sources.

*Ahead of Nawaz Sharif's arrival in Lahore, PML-N supporters head towards the airport.

* Former PM Sharif and his daughter were expected to arrive in Lahore by 6.15pm, but their flight has been held up. The duo are currently waiting in Abu Dhabi.

*"I am doing what I should do, I am taking my struggle forward. I am going to Pakistan, but what credibility is now left of the elections? Who will believe the results?" questions Sharif

*Nawaz Sharif speaks to media from the Business Class lounge of Abu Dhabi airport: "Even if 30% to 40% of Pakistan media stands united then no one will be able to gag or put pressure on the media, but they have to take a stand."

* Nawaz Sharif and daughter Maryam have gone to a hotel near the airport in Abu Dhabi. They have not yet been arrested. They are holding consultations with some unidentified people as well as some PMLN workers. Expected to board a flight to Pakistan with a NAB team onboard, reports ANI quoting PMLN sources.

* Ahead of Sharif's arrest, his mother Shamim Akhtar sais, “Son of Pakistan, my son is returning tomorrow. The decision was against him, Maryam and Safdar. I won't let them go to jail. If they are sent to jail, then I will go with them. I believe all of them are innocent and Allah will protect them.”

* Sharif and Maryam have landed in Abu Dhabi. Minutes before landing, Sharif posted a message saying he is surrendering for the benefit of future generations in Pakistan. "I'll be taken straight to jail. But I'm doing this for people of Pakistan, sacrificing for generations to come. Such opportunity won't come again. Let's build destiny of Pak together," he said.

* Did you know? According to Pakistani laws, Sharif can apply for 'Better Class' category because he is a former parliamentarian. Daughter Maryam can do so as well but will have to prove she has paid Pakistani Rs 600,000 as annual income tax. And what does 'Better Class' category mean? Inmates with the privilege get books, newspapers, 21-inch TV, table, chair and mattress - all to be paid by them. It also means high-level security from other inmates.

* Is Lahore ready for Sharif's arrest?

Dawn reports that 300 PML-N workers have been arrested in a crackdown. 10,000 police officers to be stationed on city streets. Roads leading to and from the airport have been sealed while containers have been placed to manage traffic at main junctions.

* Local media reports suggest that Sharif and Maryam will be transported to Adiala Jail using helicopters. Geo News reports that two helicopters have been stationed and that high-level security is in place - both at the airport and at the jail.

* What is the controversy and why the penalty?

Sharif faced corruption charges and was forced to resign as Prime Minister by Pakistan's Supreme Court after his name and family's name appeared in the Panama case. As per Pakistan's Geo News, Sharif was convicted for owning luxurious Avenfield properties in London's Park Lane. These properties will now be taken over by the appropriate authorities. (Read full report here)

* Several international flights to Islamabad on Friday morning have been diverted to Lahore.

* It is being reported that Sharif and Maryam will be arrested by a special NAB team at Abu Dhabi airport itself.

* Maryam, in a tweet, has said that she has told her children to be brave.

Told my kids to be brave in the face of oppression. But kids will still be kids. Goodbyes are hard, even for the grownups. pic.twitter.com/ge17Al5gfY

* Sharif and Maryam have departed from London and will take a flight to Lahore via Abu Dhabi. Sharif met Pakistan's former finance minister Ishaq Dar before leaving London.