Sukhoi Su-57E to be unveiled on Tuesday, Russia keen to sell the fighter to IAF

Chief of Air Staff Air Chief Marshal Birender Singh Dhanoa has made it clear that the IAF will only think about the Su-57E once the fighter joins the Russian Aerospace Force. Russian Minister of Industry and Trade Denis Manturov had in 2019 said that many nations including India would be interested in the supersonic fighter. 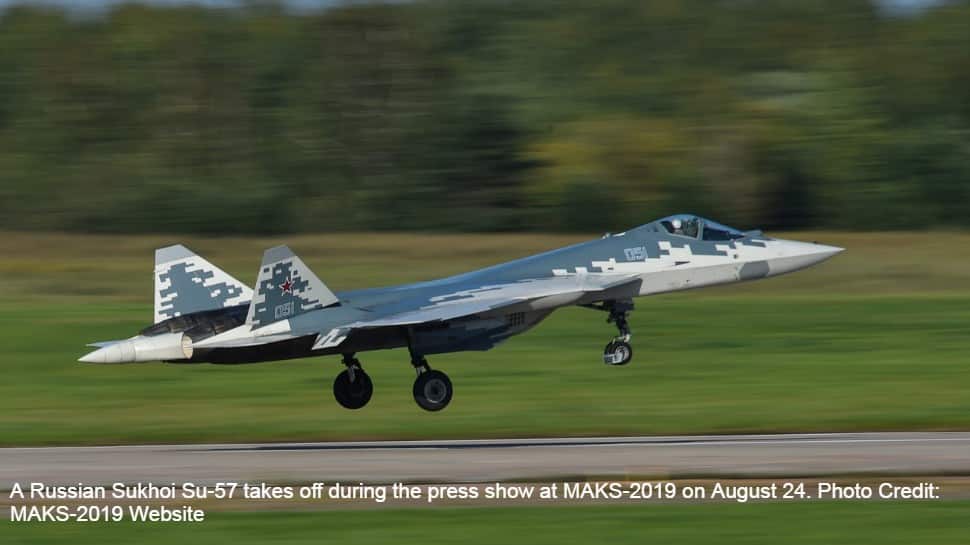 The much-awaited Sukhoi Su-57E, the export version of Russia's 5th Generation supersonic stealth combat aircraft, will be unveiled on Tuesday to the world at the International Aviation and Space Salon MAKS-2019 near Moscow. According to Rostec State Corporation the Su-57 has entered mass production after the Russian Aerospace Force ordered 76 jets.

The first Su-57, which is currently the only Russian stealth fighter, is most likely to be delivered to the country's Aerospace Force before the end of 2019. The fighter was shown to the media on August 24, 2019, with the aircraft taking to the skies to give a glimpse of its flying and manoeuvring capabilities.

Along with the Su-57, the export version of which Russia has already offered to the Indian Air Force (IAF), Rostec will present five new aircraft and helicopters apart from several communication equipments, electronic warfare systems, aviation systems, engines and airfield equipment at MAKS-2019. Russian Minister of Industry and Trade Denis Manturov had in 2019 said that many nations would be interested in the supersonic fighter. He had added that "confidence in the supplier is one of the key factors when it comes to purchasing weaponry of this kind" and India was the biggest market for Russian defence products and could be interested in the Sukhoi Su-57 jet, as it already operates several Russian-built combat aircraft including MiG-29 and Su-30MKI.

Russia’s Federal Service for Military and Technical Cooperation (FSMTC) Deputy Director Vladimir Drozhzhov, too, had told TASS news agency in July that India should resume the 5Th Generation figjhter development programme with his country once again. "I believe that we should resume this project, Russia is open to that. We are ready and are proposing this programme to our Indian partners," he had said.

However, Chief of Air Staff Air Chief Marshal Birender Singh Dhanoa has made it clear that the IAF will only think about the Su-57E once the fighter joins the Russian Aerospace Force. "If you mean the 5th Generation aircraft (Sukhoi Su-57), the question has not yet been considered. When the aircraft is already put into service with you, only then can we make a decision for ourselves. We are ready to consider it for acquisition after we see it, and it is provided to us for consideration and assessment," the IAF Chief had replied about the jet in an interview to Krasnaya Zvezda, the official newspaper of Russian Ministry of Defence in July 2019.

Rostec says the main event will be the premiere of the MC-21-300 medium-haul aircraft, developed by the United Aircraft Corporation. The corporation will also have a model Russian-Chinese CR929 aircraft fuselage and for the first time showcase the new Russian fuel tanker IL-78M-90A to the public demonstration. Some of the other aircraft to be presented include - Ansat helicopter, Mi-38 helicopter in VIP configuration, and the newest medium multipurpose Ka-62 chopper.

"MAKS is without exaggeration the key event in the business calendar for the entire aviation industry and for Rostec. This year we are demonstrating more than 250 samples of equipment, including 40 novelties - planes, helicopters, communication facilities, avionics and many others. It is also planned to hold a number of significant negotiations and sign agreements in the sphere of creation of new models of equipment and supplies of our products," Rostec General Director Sergey Chemezov said in a press release. MAKS-2019 is a biannual aviation event organised at Zhukovsky International Airport, near Moscow.

According to Russian defence officials, a fleet of Su-57s was combat-tested in Syria, in February 2018. The only other 5th Generation stealth fighters in active service are the F-22 Raptor and F-35 Lightning II of the United States of America.