Devendra Fadnavis will be chief minister, there is no 50-50 formula: Ramdas Athawale

Amid the scrimmage going on between Bharatiya Janata Party (BJP) and Shiv Sena over the government formation in Maharashtra, Union Minister Ramdas Athawale on Thursday stated that Devendra Fadnavis will be the next chief minister, adding that there is no 50-50 formula. 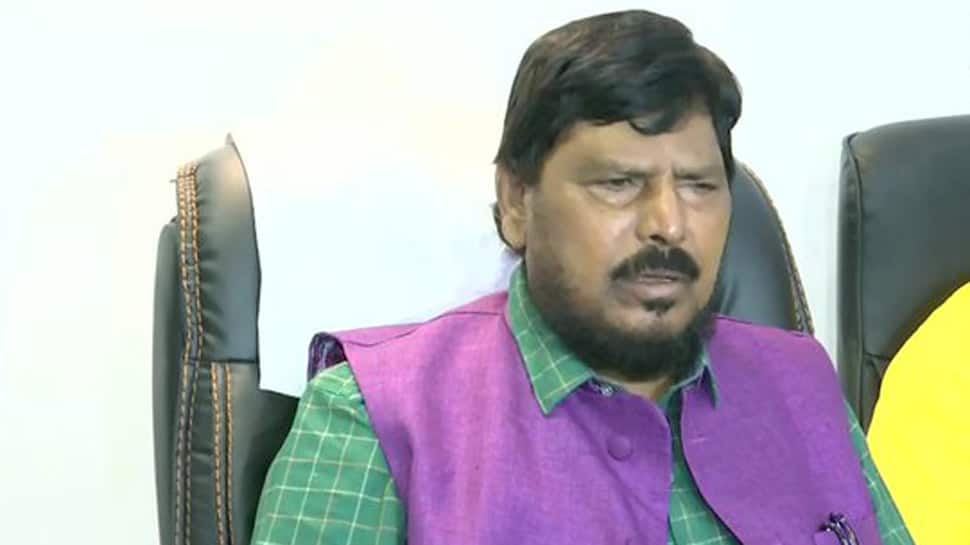 Amid the scrimmage going on between Bharatiya Janata Party (BJP) and Shiv Sena over the government formation in Maharashtra, Union Minister Ramdas Athawale on Thursday stated that Devendra Fadnavis will be the next chief minister, adding that there is no 50-50 formula.

The possibility of the formation of a government by the Shiv Sena-BJP alliance is getting convoluted with every passing day as neither party is agreeing to a common stance. While Shiv Sena has been adamant on its demand for the 50-50 seat-sharing formula, the BJP has refused to acknowledge this formula for government formation. In the election for the 288-membered assembly, the BJP won a total of 105 seats and the Shiv Sena won 56 seats.

Reiterating its support to the BJP, Athawale said that the tiff between the BJP and Sena should end soon so that the 'Mahayuti' government can come to power in the state. Speaking to Zee News, the Republican Party of India (RPI) chief said that the four other parties of the alliance should be given a share in the state Cabinet, adding that they will soon meet the CM and BJP state chief Chandrakant Patil. The four parties should get four portfolios.

After holding a meeting with NDA's smaller allies in Maharashtra, Athawale in a press conference said also added that they will talk to Sena chief Uddhav Thackeray and ask him to end the scuffle with the BJP. Sena can get 16 seats in Cabinet, he said, adding that there will be no 50-50 formula. He reiterated that Fadnavis will be the CM and BJP won't accept the -50 formula.

Even before this, there was the government of the BJP and Shiv Sena and as Sena had more seats, the chief minister was from their party. During the tenure of the Nationalist Congress Party (NCP) and the Congress, the CM was from the Congress.

He also said, "My name is cropping up without any reason. My party has not won many seats. If I get a chance for the post of the chief minister, I will do a good job. At the moment I am a cabinet minister in the Modi government and I am very happy about it. Devendra Fadnavis government will be formed in Maharashtra once again."

The RPI chief also said that Shiv Sena will be given two to three ministerial posts, adding that discussion will happen only when Home Minister Amit Shah is in Mumbai.

He added, "Uddhav Thackeray and CM Fadnavis have good relations. Both came together and led the way. Not everyone gets by asking, but RPI will get cabinet ministers. The cabinet should be formed soon, and four BJP allies got ministerial posts. The small four allies want Devendra Fadnavis to become chief minister and Uddhav Thackeray will be our leader. Sanjay Raut's role is slowly changing, Shiv Sena will join the government."