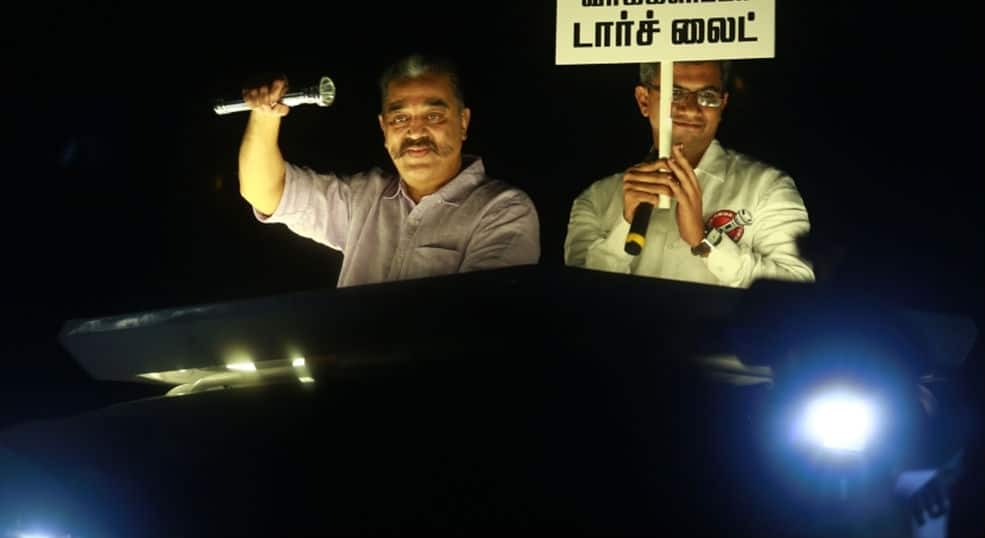 A ruckus erupted at actor-turned-politician Kamal Haasan's public meeting in Aravakurichi, Karur district of Tamil Nadu, on Thursday night after two miscreants allegedly hurled eggs and stones at the dais.

No one was injured in the incident and Haasan was escorted safely. However, tension has prevailed in the district.

Police took two persons, suspected to have attacked Haasan, away for questioning. Meanwhile, Karur Superintendent of Police V Vikraman rushed to the spot to pacify the agitated Makkal Needhi Maiam ((the party founded by Haasan) workers and urged them to disperse.

However, the cadre demanded police action. The police tried to disperse the crowd and assured them that action will be taken.

The incident comes a day after footwear was hurled towards a vehicle from which Haasan was addressing an election meeting in the Tirupparankundram Assembly constituency on Wednesday evening.

Amid all the incidents, Haasan asked his fans to maintain decorum and "not to be drawn into the violence".

"Dear MNM family and fans, this is an acid test for our decorum and demeanour. Do not listen to their noises and be drawn into their violence," he said in a tweet.

"They are extremists who are slighted by the Truth. Naalai Namadhey! (Tomorrow belongs to us), " he added.

Dear MNM family and fans, this is an acid test for our decorum and demeanour. Do not listen to their noises and be drawn into their violence. They are extremists who are slighted by the Truth. Naalai Namadhey!

The MNM president recently courted controversy when he referred to Nathuram Godse as 'independent India's first terrorist was a Hindu.'

However, on Wednesday, he clarified his remark on Godse while also blaming the media for taking his comments out of context. Haasan said, “People are getting angry for what I said at Aravakurichi. What I have said is the historical truth. I am not trying to pick a fight with anybody.”

Lashing out at the media he said, “Without listening fully to whatever I had spoken, they have used one particular portion and used it against me. I said it only once, but the media picked the wrong portion and cut its head and tail so that it can be twisted in any manner, and they played it hundreds of times. Whatever IPC sections they have booked me on, the media is equally responsible.”

The Madras High Court on Thursday reserved its order on the anticipatory bail petition filed by Haasan over his remark.

It will be mistake for Veerashaivas to vote for Congress: Yeddyurappa