CM Ashok Gehlot went to Mumbai on Tuesday, deputy CM Sachin Pilot also went to Maharashtra on Wednesday leaving the Congress workers in a tizzy as to who should lead the campaign on these two seats with just two days left for the full campaigning to end. 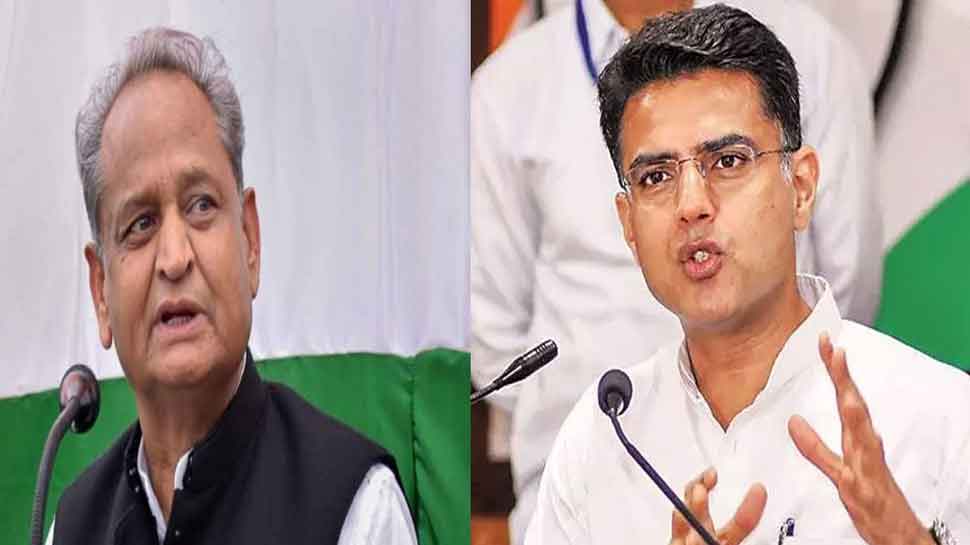 Jaipur: Although it's just four days left to go for Rajasthan Assembly bye-elections to be held on October 21 on two seats - namely Mandava and Khinvsar, chief minister Ashok Gehlot and deputy chief minister Sachin Pilot has been given the task of campaigning in Maharashtra for Assembly polls there.

While Gehlot went to Mumbai on Tuesday, Pilot also went to Maharashtra on Wednesday leaving the Congress workers in a tizzy as to who should lead the campaign on these two seats with just two days left for the full campaigning to end.

A senior Congress worker speaking to IANS said, "Both the leaders, one heading Congress and one heading state, have not organised a single election rally for by-polls. They seem to be shying away from direct campaigning on these two seats fearing a major loss. In such a scenario, they will again exchange allegations for the loss. Surprisingly, even the Congress high command did not ask them to campaign on local seats," he said.

However, state Education Minister Govind Dotasara told IANS, "Chief Minister Ashok Gehlot and Deputy chief minister Sachin Pilot will visit Jhunjhunu on October 18 to pay tributes to Ram Narayan Chaudhary, father of Congress candidate Rita Chaudhary, who was a senior Congress worker. This shall solve two purposes; while Congress leaders shall pay tributes to Chaudhary, they shall also address an election rally in Mandava. This is a Jat dominated belt and as the two seats where elections are scheduled are Jat dominated, it shall make a win-win situation for us," he said adding, "We shall win both the seats."

When asked if any senior leader had campaigned earlier in Mandava, he said, "This shall be the first rally of CM and deputy CM in Mandava. However, they went to Khinvsar during the nomination filing process of Congress candidate Harendra Mirdha. Meanwhile, we are looking into campaigning and working hard to ensure we come out a winner in these elections."

The Congress, in its star campaigners list, had included former PM Manmohan Singh among 40 others. However, Singh is yet to take the stage while BJP has fielded all its senior leaders right from Union minister Gajendra Singh Shekhawat, state president Satish Poonia, leader of opposition Gulabchand Kataria, MP Hanuman Beniwal, union ministers of state including Arjun Meghwal and Kailash Chaudhary.

Another Congress party worker said, "We don't want to make these as high profile elections and hence have shied away from bringing any senior leaders into campaigning. Both of our leaders shall come back by Thursday night and hence will spare two days for campaigning," he added.

Mandava and Khinvsar will go for polls on October 21 as the seats became vacant after their respective MLAs won the Lok Sabha elections. While Narendra Kumar Khinchal of the BJP won from Jhunjhunu, Hanuman Beniwal of the RLP, a BJP alliance, won from Nagaur thereby necessitating the by-polls.

Meanwhile, Congress spokesperson Suresh Chaudhary said, "our leadership has deputed state ministers and senior leaders for campaigning. Those who are required with respect to social engineering have been campaigning there. We have won Assembly elections under party leadership and shall win these by-polls too," he exuded.

Pilot on Tuesday had also expressed confidence of clean sweep in both the seats.

Speaking to media, he said, "the elections are basically a test of the work done by the government and we are fully prepared for it. We will win both seats with huge margin. We had even won the by-polls held during BJP's rule, and this time, we are in the government and therefore there is no reason for not winning them," Pilot added.

While Congress has fielded Rita Chaudhary in Mandawa and Harendra Mirdha in Khimsar, both being former MLAs, the BJP has fielded Sushila Sigra from Mandawa and is contesting by-polls in alliance with MP Hanuman Beniwal's Rashtriya Loktantrik Party (RLP) from Khimsar where Beniwal's brother Narayan Beniwal is the candidate of the alliance.