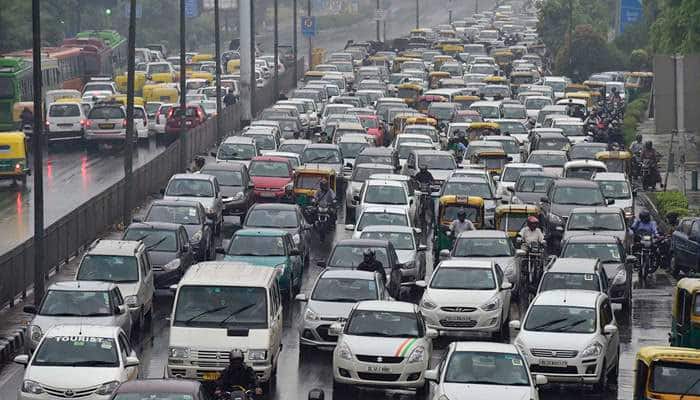 In July this year, the Cabinet cleared the historic Bill that seeks to tighten traffic regulations to check violations, including drunk and rash driving. It was introduced in the Lok Sabha in August.

"We expect the Motor Vehicles Bill to be cleared in Parliament in the coming session," the minister told reporters on the sidelines of a workshop on road safety here.

The Motor Vehicles (Amendment) Bill 2016 proposes hefty penalties for violation of traffic norms, including up to Rs 10,000 fine for drunken driving and Rs 2 lakh compensation for hit-and-run cases. The Bill also has provision of up to Rs 10 lakh compensation in the case of road fatality.

It includes penalties in the range of Rs 1,000-4,000 for overspeeding. Besides, driving without insurance will be punishable with Rs 2,000 fine and/or 3-month imprisonment while driving a two-wheeler without helmet will attract Rs 2,000 fine and 3-month suspension of licence.

The provisions also include that guardian or owner will deemed to be guilty in the case of road offence by juveniles and registration of the vehicle will be cancelled.

Earlier, speaking on road safety, Gadkari said nearly 1.5 lakh people lose their lives every year due to road accidents, which is a grave cause of concern.

"Bringing down road fatalities is a priority for the government. By 2019, we should bring down the number of deaths by 50 per cent. It pains me that we lose so many people every year to accidents," he added.

The minister said about three lakh people suffer from multiple fractures resulting in loss of hands or limbs.

He pulled up officials for slow pace of work in fixing accident-prone spots and even warned about strict action if concrete results do not come by within the stipulated time.

"I will ask all the officials concerned to give reports and based on that, we will see. I will personally felicitate those doing a good job, but those who are shirking responsibilities will face the music," the minister warned.

As many as 786 accident black spots have been identified across the country and the ministry has a target to fix these at an estimated Rs 11,000 crore, including Rs 2,000 crore through road engineering.

The list has been drawn up based on data provided by various states covering such spots under their jurisdictions. The ministry will rope in international engineers to improve road design so that mishaps can be minimised. The cost of such accidents is estimated at 3 percent of GDP.

Honda Accord Hybrid launched in India at Rs 37 lakh