Australia were set an unlikely target of 399 for England to chase after the hosts were all out in the first session of the day. 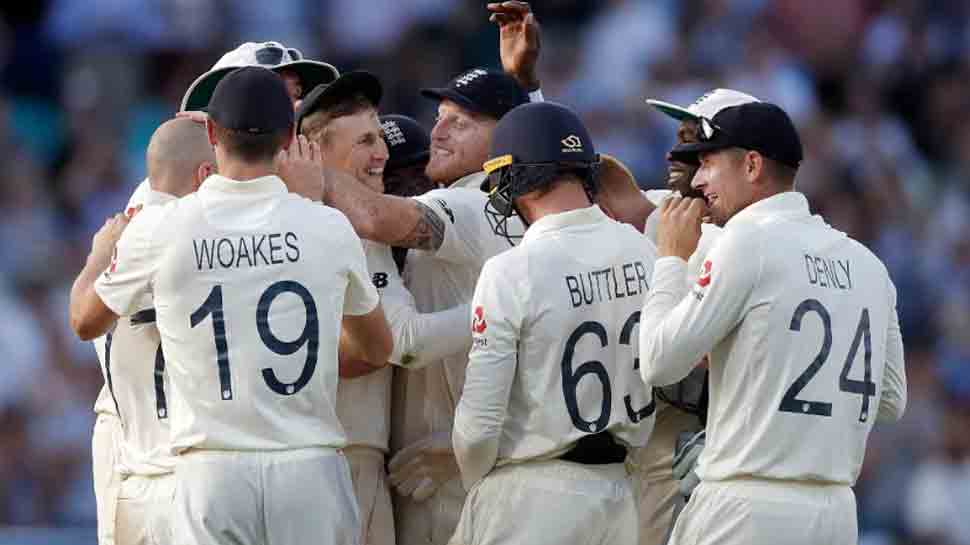 England beat Australia by 136 runs at The Oval on Sunday and thus avoided falling to a first series defeat to their Ashes rival at home since 2001. The five-match Test series has been drawn 2-2. It is the first instance of a drawn Ashes series since 1972.

Australia were set an unlikely target of 399 for England to chase after the hosts were all out in the first session of the day. Matthew Wade scored his second century of the series as England managed to deny Steve Smith his 11th consecutive 50-plus score in the Ashes.

Stuart Broad set him up in the 25th over during the second session and Smith ended up holing at leg gully. He departed on 23 which beat his previous lowest score in this series that he made in the first innings of the match (80).

However, Wade's presence kept Australia's hopes alive but the final wickets fell in a rush after his dismissal.

Wade made considerable partnerships with Mitchell Marsh, captain Tim Paine and Pat Cummins as it looked like he might come close to emulating Ben Stokes' heroics at Headingley. He saw out a particularly fiery spell from Jofra Archer on his way to his century.

Marsh got a reprieve early in his innings when Chris Woakes overstepped a delivery that he had nicked to gully. Marsh was on six at the time off 20 deliveries. He went on to face 45 balls more before falling to England captain Joe Root due a rather loose shot just before tea.

Tim Paine then joined Wade in the middle but could last only 34 balls. He fell to Jack Leach with umpire Kumar Dharmasena thinking long and hard before raising his fingers. Paine reviewed the decision unsuccessfully.

Archer then cranked up his speeds and aggression with long stares on follow-throughs reserved for his Hobart Hurricanes captain Wade. He hit speeds north of 90mph regularly in the eight-over spell, even bowling the fastest ball of the series at 95.6mph. However, it was not enough as Wade saw through the spell.

Wade gave away a few big chances after crossing over into three digits but England got the breakthrough in the form of Pat Cummins.

Broad got him off the last ball of the 71st over and Root seemingly dismissed Wade off the very next ball. But Wade reviewed the decision successfully and bought more time.

Root got him eventually three overs later. Wade advanced forward but missed the delivery completely and Jonny Bairstow made no mistake in whipping off the bails. Jack Leach then got the final two wickets off consecutive balls in the next over.

Australia have thus not been able to record a first series win in England since 2001 but they retain The Ashes by virtue of them winning the previous series between the two sides in 2018.