Defending champions India were given a run for their money by a spirited Hong Kong but edged past with a 26-run victory in their Asia Cup opener at the Dubai International Cricket Stadium. 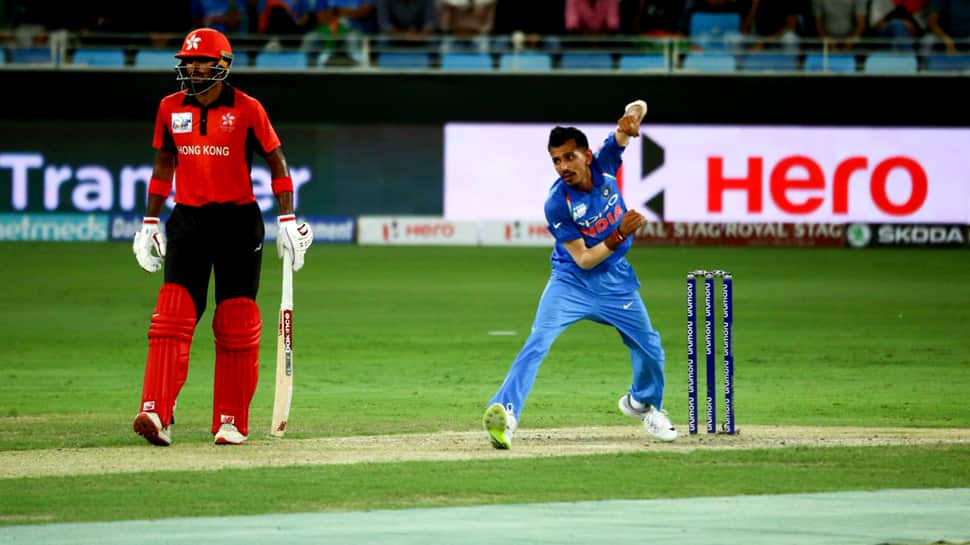 Defending champions India were given a run for their money by a spirited Hong Kong but edged past with a 26-run victory in their Asia Cup opener at the Dubai International Cricket Stadium.

# Wicket!! Khaleel Ahmed gets the better of Ehsan Khan with a slower ball to pick up his 3rd wicket for the match. He becomes the 16th Indian to bag 3 wickets on debut (ODI).

# 50 ODI wickets for Kuldeep Yadav, he becomes the second-fastest spinner, 24 matches, to achieve the feat. Sri Lanka's Ajanta Mendis is the fastest with 19 matches.

# India hung-around to trigger a collapse and Hong Kong, who were cruising at one stage, seem to have lost their way. Indian skipper Rohit Sharma would be a happy man. Hong Kong 235/6 after 46 overs, need 51 off 24 balls.

# Wicket!! Double delight for Chahal as he picks up Kinchit Shah (17) and Aizaz Khan (0) to reduced Hong Kong to 6 wickets.

# Wicket!! Chahal joins the party. He tempts Babar Hayat with a tossed-up ball outside the off-stump and Hayat ends up edging the ball to Dhoni. Hong Kong 199/4!

# It is safe to say that India are back into the game. However, Hong Kong, who need 88 runs in the last 10 over, will try make India run for their money. It is a do-or-die for Hong Kong and India, who have had an exhausting, face a tougher opponent tomorrow. Hong Kong 198/3 after 40 overs.

# Wicket!! Khaleel strikes again. He probes Christopher Carter with an angling delivery and the latter opens the face of his bat to edge a catch to MS Dhoni. Hong Kong 191/3, need 95 runs in 65 balls.

# Wicket!! Khaleel strikes for India. He skids the ball into Nizakat to trap him plumb on the front! Nizakat's stunning knock comes to an end. Nizakat falls for 95 off 115 balls.

# Wicket!! India finally have a breakthrough as Anshuman Rath hits Kuldeep Yadav's pitched up delivery straight into the hands of Rohit Sharma at short-cover.  Hong Kong 174/1! Anshuman Rath departs for a 97-ball 73.

# India try and create pressure as they concede only 23 runs in the last 7 overs. Hong Kong, however, are still in a comfortable position at 133 runs with 10 wickets in hand. India need to pull out something special here to trigger a collapse. Hong Kong 133/0 after 27 overs, need 153 runs to win.

# It has been a frustrating and an exhausting 20 overs for India. The likes of Bhuvneshwar Kumar, Yuzvendra Chahal and Kuldeep Yadav have failed to create meaningful chances. Hong Kong batsmen are rotating the strike at a healthy rate and have a huge chance to upset heavyweights India, who are starting to let things slip here. Hong Kong 119/0 after 22 overs, need 167 runs to win.

# Century-stand! Hong Kong openers Nizakat Khan and Anshuman Rath continue to threaten India as they bring up a 100-run partnership. This is their highest-ever opening stand. What a remarkable feat!

# Half-century! Nizakat Khan pulls Shardul over the mid-wicket boundary to bring up his half-century in style. What a start! Nizakat Khan 52 off 43 balls (8 fours and 1 six).

# Hong Kong 56/0 after 10 overs. Click here for the detailed scorecard.

# Anshuman and Nizakat have pounced on anything that is pitched-up and confidently defended the good deliveries. They have notched up 56 runs and not lost a single wicket in the first 10 overs. However, they have tougher times ahead with the inclusion of spin. This is Hong Kong's first 50-run partnership for the opening wicket against a Test nation.

# Hong Kong are off to a cautious start. Both Anshuman and Nizakat are happy to take things slow against the likes of Bhuvneshwar Kumar and debutant Khaleel Ahmed. While Kumar got the ball to swing, Khaleel is still settling and searching for a probing angle to bowl at. Hong Kong 26-0 after 6 overs.

# Kuldeep Yadav is in at number nine.

# Shardul Thakur is in at number eight.

# Hong Kong have come back remarkably, Kinchit Shah, in particular, bowled flat and contained the Indians well in the death overs. He has taken two wickets and given only 37 runs in 8 overs at an impressive economy rate of 4.63. India, who were cruising to a 300-run mark, lost wickets in quick succession and are struggling to accelerate. India 275/5 after 48 overs.

# Bhuvneshwar Kumar is in at number seven.

# Kedar Jadhav is in at number six.

# Wicket!! This is huge. Ehsan Khan traps Dhoni, who pushes an edge to wicketkeeper Scott McKechnie. Dhoni departs for a duck. India 247/4!

# MS Dhoni is in at number five.

#  At 8 runs per over, at this stage, India will reach 314 runs and expect Shikhar Dhawan to change gears and accelerate with 13 overs in hand. Hong Kong, however, could restrict India for a lower score if they manage to take a couple of wickets as MS Dhoni and Kedar Jadhav are the only two recognised batsmen left to bat. India 216/2 after 38 overs.

Will he be able to make his ODI high score today? #INDvHK #AsiaCup2018 pic.twitter.com/OqgdG0zIrz

# Century! Shikhar Dhawan starts his Asia Cup campaign with a stunning century off 105 balls. Ton no. 14 for Dhawan.

# Shikhar Dhawan (89 off 94 balls) is 11 runs away from his 14th ODI ton and looks comfortable enough to reach the three-figure mark. India at 176/2 with eight wickets in hand look set to a big total here.

# Dinesh Karthik is in at number four.

# Dhawan and Rayudu are batting, in the exhausting Dubai heat, with a clever approach. They have stitched an 88-run partnership for the second-wicket and have put India in a comfortable position. India 135/1 after 25 overs.

# Half-century!  Shikhar Dhawan brings up his 26th ODI half-century in 57 balls. Decent start from Dhawan, who will now eye the three-figure mark.

# Interestingly, Shikhar Dhawan is the only Indian (who featured) from the final Test against England in today's playing XI.

They've only met once before in ODIs, at the 2008 Asia Cup where @msdhoni and @ImRaina scored centuries in a 256 run win in Karachi! pic.twitter.com/c2aV1Owxzf

# Indian skipper Rohit Sharma may have missed out on a big score today but his fellow opener Shikhar Dhawan is determined to make most of inexperienced Hong Kong in favourable Asian conditions. He has punished anything outside the off-stump and is happy to is rotating the strike at a healthy rate. Shikhar Dhawan 40 runs off 46 balls.

# Ambati Rayudu has a great opportunity to make a case for the 2019 World Cup. He was prolific in the Indian Premier League, scoring 602 runs in 16 matches at an impressive strike rate of 43.00. Virat Kohli's absence is a blessing in disguise for Rayudu, who last played for India in 2016 (against Zimbabwe at Harare), to cement his place in the unsettled Indian middle order.

# Ambati Rayudu is in at number three.

# Wicket!! Ehsan Khan tempts Rohit Sharma with a short delivery and the latter miscues his shot, handing a catch to Nizakat Khan at mid-off. Indian skipper departs for a 22-ball 23. India 45/1!

# The Indians are off to a great start, scoring at 6.8 runs per over. The wicket is as flat as it can get and Hong Kong pacers Eshan Nawaz and Tanwir Afzal, bowling under 130 kph, may have to toil hard if they a fancy a chance against Rohit Sharma and Shikhar Dhawan. India 34/0 after 5 overs.

# Rohit Sharma and Shikhar Dhawan open the innings for India.

# India rest Hardik Pandya, Jasprit Bumrah and KL Rahul. Hong Kong, on the other hand, have made no changes to their XI.

# Rajasthan's 20-year old spearhead Khaleel Ahmed debuts for India. The left-arm pacer has 28 wickets in 17 List A matches at an economy rate of 4.74.

Hong Kong have won the toss and opt to bowl.

After a gruelling English summer, India, without Virat Kohli, look to regroup and get their ODI combinations right before the crunch-Pakistan clash. Hong Kong, who lost their opener against Pakistan, would want to put up a fight against the five-time champions.

Indian skipper, Rohit Sharma may rest senior players, part of the English tour, and experiment with new inclusions. Left-arm pacer Khaleel Ahmed could bring in the much-needed variety while Ambati Rayudu and Kedar Jadhav can boost the Indian middle-order.

Hong Kong, who have already experienced the searing Dubai heat and the pitch conditions, will aim to get their batting woes right in a do-or-die match against the fatigued Indians.