Chasing a paltry 49, India opener Rohit Sharma finished the contest in style as he smashed opposition skipper Joe Root for a massive six towards the mid-wicket region. With this victory India have now taken an unassailable 2-1 lead in the four-match series. 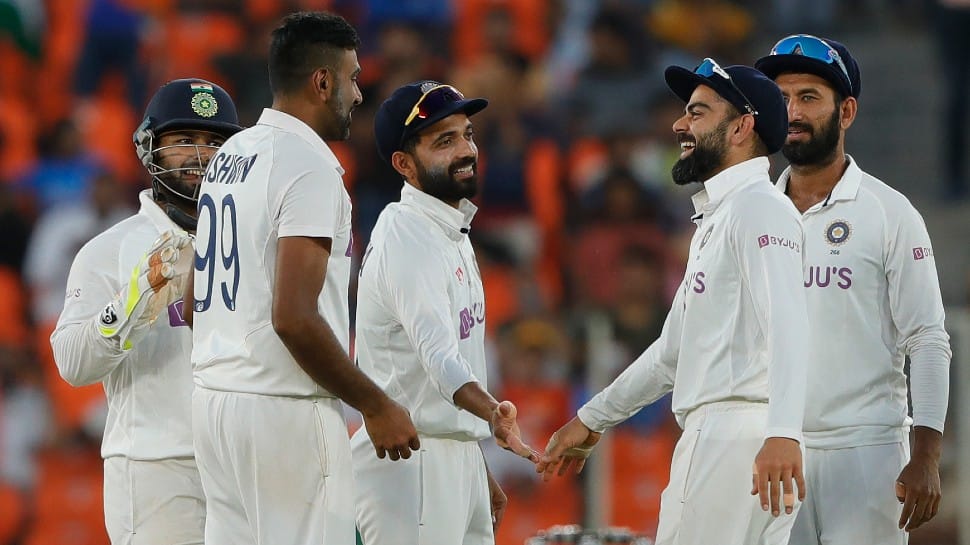 India have now taken 2-1 lead in the ongoing four-match series against England. (Twitter/BCCI)
Share:
Written By:

Local star Axar Patel and R Ashwin led England's carnage at the Narendra Modi Stadium in Motera, Ahmedabad as India completed a massive 10-wicket win against the visitors on Day 2 of the third Test. The duo combined to pick 18 wickets from both the innings as England were bowled out for 112 and 81 respectively.

Chasing a paltry 49, India opener Rohit Sharma finished the contest in style as he smashed opposition skipper Joe Root for a massive six towards the mid-wicket region. With this victory India have now taken an unassailable 2-1 lead in the four-match series.

After enduring a disappointing outing in the opening day of the contest, the visitors showed signs of a comeback as Jack Leach along with Root led England's fightback on Day 2. The duo combined to pick the remaining seven wickets to end India's first innings at 145. Leach finished the innings with four wickets, while Root completed his maiden five-wicket haul in Tests.

However, England failed to carry forward a similar tempo with the bat and found themselves in the backfoot right from the word go. Axar, who finished the match with eleven wickets, kicked-off the action by removing England opener Zak Crawley in the first ball of the innings. The over got more exciting as he almost picked his second man in the following delivery before DRS came to Jonny Bairstow's rescue. But the right-handed batsman failed to capitalise and was cleaned up by Axar in the third delivery of the same over.

After Bairstow's dismissal, Dom Sibeley was the third man to depart, leaving England struggling at 19/3.

Root, who scored a fine double century in the first Test in Chennai, then tried to get things back in order along with Ben Stokes, before the latter was removed by Ashwin on 25. This was the 11th time when Ashwin dismissed Stokes in the traditional format of the game.

Soon after Stokes' dismissal, the England skipper was also shown the way back to the pavilion, who became Axar's fourth victim as England were left reeling at 56/5. Both Ashwin and Axar maintained their grip in the contest as the latter went on to become the first bowler to complete ten-wicket-haul in day-night Tests. The 27-year-old finished the innings with yet another fifer, thus extending his five-wicket-haul tally to three from two matches.

Meanwhile, Ashwin scripted yet another record as he became the fastest Indian cricketer to reach 400 Test wickets. The carrom-ball specialist took 77 matches to accomplish the feat, which also saw him become the second-fastest cricketer after Sri Lanka great Muttiah Muralitharan, who achieved the same in just 72 matches.

Following the England collapse, the Indian opening pair of Rohit and Gill maintained a cautious approach and helped India wrap up the contest inside two days.