Shikhar Dhawan and Dinesh Karthik combined to pull one of the most hilarious banter of the 14th edition of the Indian Premier League. 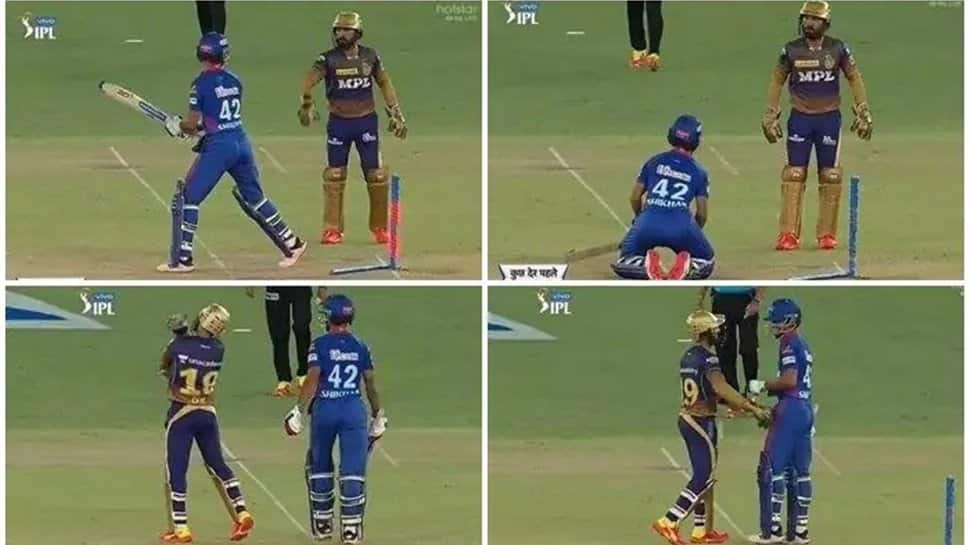 Shikhar Dhawan is a pure entertainer be it with his bat or his on-field antics, the left-handed batsman has always managed to share light moments with the opposition players. Cricket enthusiasts on Thursday witnessed a similar event as Dhawan and Dinesh Karthik combined to pull one of the most hilarious banter of the 14th edition of the Indian Premier League.

During the clash between Delhi Capitals and Kolkata Knight Riders at the Narendra Modi Stadium, which the former won by seven wickets, Dhawan went on to score 46 off 47 deliveries. During the course of his innings, Karthik and Dhawan were seen engaged in a hilarious banter as the former quickly dislodged the bails despite Dhawan standing well inside his crease.

The incident took place in the 12th over when the KKR wicketkeeper gathered a ball sliding down the leg side and started appealing for stumping. What followed next was an absolute delight for the fans and it also left the on-air commentators in splits.

Dhawan then looked at Karthik and the southpaw subsequently came down to his knees while still remaining inside the crease.

Meanwhile, Dhawan also surpassed Suresh Raina to become the batsman with the second-highest runs in the lucrative T20 league. The left-handed batsman now has 5508 runs from 182 innings, while the Chennai Super Kings batsman has so far amassed 5489 runs from 194 innings.