Chasing 299 in the second ODI against Australia, Karthik (25) played a key role in team's successful, yet, tight chase by putting on 57 runs for the unconquered fifth wicket with Dhoni (55). 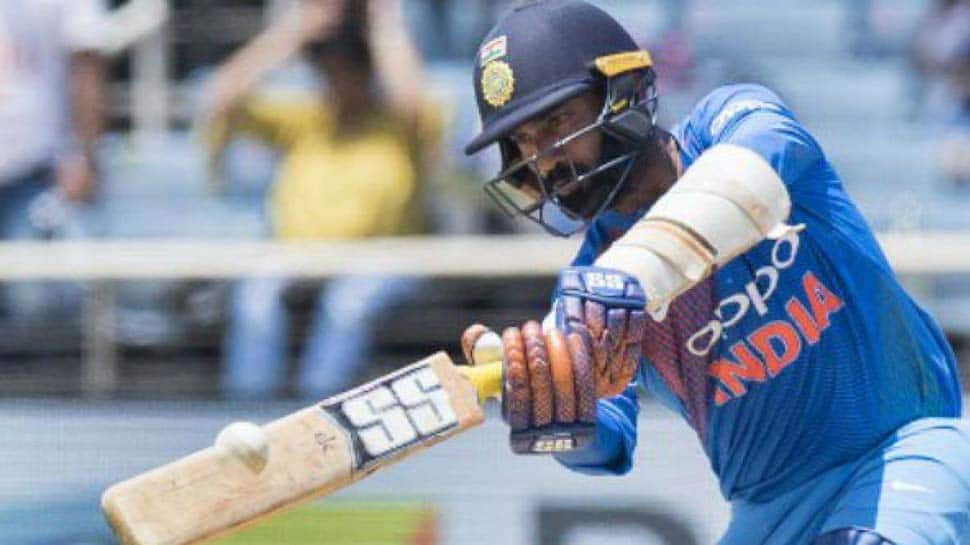 India's wicketkeeper-batsman Dinesh Karthik on Tuesday revealed that the team management has identified the role of a finisher for him at number six even as he effusively praised former skipper Mahendra Singh Dhoni for showing that he can still put opposition under the pump when required.

Chasing 299 in the second ODI against Australia, Karthik (25) played a key role in team's successful, yet, tight chase by putting on 57 runs for the unconquered fifth wicket with Dhoni (55).

"I think Dhoni's been pretty solid this series. It was the kind of innings he's played over and over again. So it was great to watch him bat and finish off an innings. We know he can absorb pressure and release it back to the opponents when the time is right. That has always been his strength and today you saw the perfect example of that," Karthik said.

"He knew his plans and I knew my plans and we were just complementing each other," he added.

Dhoni had faced a lot of criticism for his slow knock in Sydney but today he hit two sixes in his 54-ball 55.

"He doesn't think there are ten overs and how to score in them, but he thinks about how the bowler is bowling now and that's all he thinks.

"Dhoni and I knew that we were just one hit away in the last over, so we were not tense. Even the bowler knew they were under pressure as he has to execute six great balls to stop us from scoring. One mistake he made, we would have pounded on him and the first ball he hit a beautiful six which kind of sealed the deal," he said.

Karthik also spoke about the role he has been told to play by the Indian team management at number six, as he also took pressure off Dhoni with his cameo.

"I've practiced it (finishing games), worked on it and it's a skill I think is very important. It's a skill where you need to have a cool head. A lot of experience helps. This is probably one of the hardest skills in the game. To finish a match and be on the winning side is something that is great to be a part of,"Karthik said.

"Definitely the team management has told me this is the role for me right now. And they want me to do the best I can. They are backing me completely. They have told me that this is where I'm going to bat and this is what they expect out of me and I'm trying to achieve that," he added.

Talking of treacherous hot conditions taking a toll on Dhoni, the Tamil Nadu batsman jokingly said that he made it worse for the former captain by running hard between the wickets.

"It was a very hot day. Everybody tried to have as many liquids as you could but still he was going through a lot of cramps. The fact that he was batting for a long, long time didn't help either. And with me being there, I run a lot. I run twos and threes and pushing him. So it was that much more harder for him. I think next we play together, he'll prefer somebody else there who can hit a boundary or two. It was good, batting with him after a long time and it felt good," he said.

On a day when temperatures touched 41 degrees in Adelaide, Indian cricketers stood out with their intense fielding effort as well as bowling and batting in blistering heat and Karthik credited the team's trainer Shankar Basu for players' supreme fitness.

"Our trainer Mr. Basu is best in the world. He knows exactly when to push and when to keep an off day. He is the best strength and conditioning trainer going around in the world. He has a lot of knowledge and he pushed us exactly as per that.Whoever is coming from injury, they are properly fit. In the last ten years I have worked with Basu and how he has helped me, he is an amazing trainer and a lot of credit should go to him," Karthik said.

"I am sure fast bowlers can given much more detail because they have worked a lot with him. There is difference in bowling 130 and 140 km/hrs. He makes sure that happens because we are very scientific in our training methods. He tracks everything including the amount of running we do. We have this vest which has GPS in it and gives us data on how much we are pushing ourselves. It's very detailed and systematic, so lot of credit to him," he signed off.