In contemporary cricket, Indian captain Kohli is considered a firebrand, who enters the field with a no-holds-barred attitude, and many of his critics have focussed on this one aspect to deride the 28-year-old. 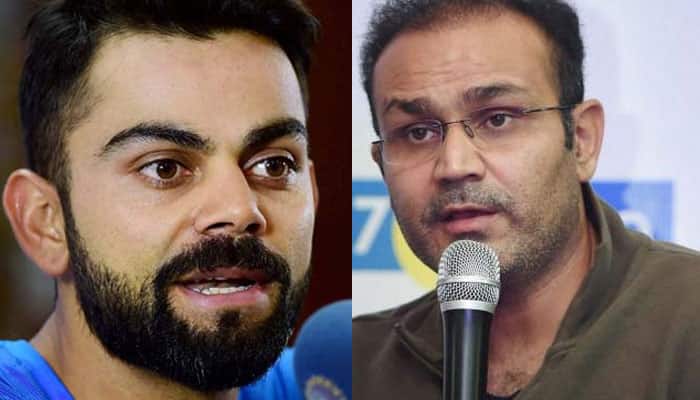 New Delhi: Former India opener Virender Sehwag has backed Virat Kohli's aggressive captaincy while claiming that there will be no joy in watching cricket if players are restraint from expressing their emotions on the field.

Sehwag, who is remembered for his explosive batting, also said that sledging is an important part of the game, but players should not cross the line. The 38-year-old himself had involved in many intense moments during his 14-year-long career as one of the most feared batsmen.

"Sledging is an important part of the game but you should never cross the line. However, if there's no sledging, there won't be any enjoyment left in the game," Sehwag told India TV.

With the upcoming India-Australia limited-overs' series, the focus will once again be on the sledging part, considering how the two fierce opponents had faced off in a notorious Test series early this year. Both the captains, Kohli and Steve Smith found themselves involved in highly publicised fights, which at times threatened to become personal.

And the "Nawab of Najafgarh" spelt out how not to make it personal.

"You can sledge about somebody's technique, bowling action or batting stance but it should not get personal," he said.

In contemporary cricket, Indian captain Kohli is considered a firebrand, who enters the field with a no-holds-barred attitude, and many of his critics have focussed on this one aspect to deride the 28-year-old.

But the skipper's fellow Delhiite has no problem with it. Sehwag said Kohli is naturally aggressive so, he plays his game in the same manner.

"I think it is Virat Kohli's aggression which comes out during his celebrations. You can't call it sledging. And when somebody from the opposition sledges him, he gives it back and it is necessary to give it back. But I feel it should be controlled aggression," he said.

India are in Sri Lanka for a full series. India have won the three-match Test series 3-0, a historic feat; then sealed the five-match ODI series with a six-wicket win last week to take an unassailable 3-0 lead.

The fourth ODI match will be played on Thursday (August 30) at R Premadasa Stadium, Colombo. It will be followed by the fifth and final ODI match on Sunday (September 3) at the same venue. The tour will finally end after the lone T20I match on next Wednesday (September 6).

Then within a fortnight, India will host Australia in the second-leg of their 2016-17 tour, starting with first of the five ODI matches in Chennai on September 17.