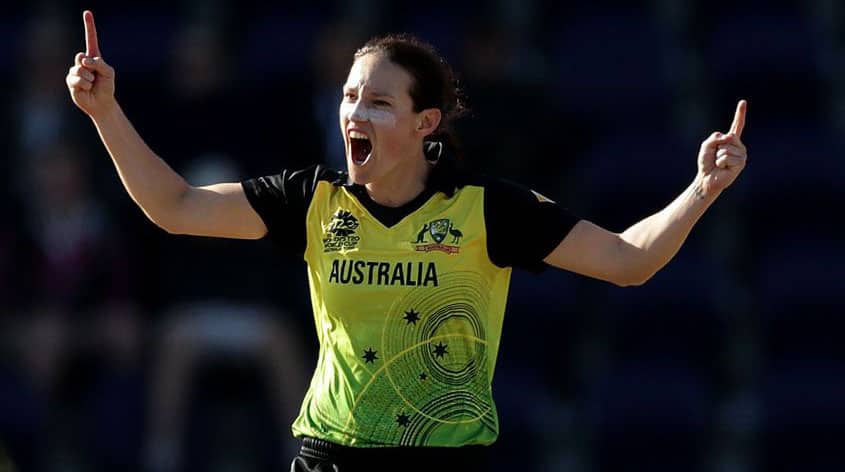 27-year-old Schutt thought her once-in-a-lifetime shot at a home World Cup final had gone when rain hit during the semi-final clash but the pacer took a crucial two for 17 to down South Africa and take her side to Sunday's showpiece against India.

Excitement abounds for the Melbourne Cricket Ground (MCG) showdown yet Schutt admitted she quakes at the sight of India’s top-order big guns, who flayed her for 16 in her opening over of the tournament.

“I just hate playing India - they’ve got the wood over me. Smriti and Verma have got me covered. That six Shafali hit me for in the tri-series was probably the biggest one I've ever been hit for," the ICC official press release quoted Schutt as saying.

“There are obviously some plans we're going to revisit as bowlers. Clearly, I'm not the best match-up to those two in the Powerplay. They find me quite easy to play. We're at that Final we've been talking about for so long and against India, which is super fitting considering the tri-series we had. It couldn't really be a bigger challenge for us," she added.

Schutt bore the brunt of Verma and Mandhana’s attacking elan in the very first over of last month’s tri-series, crashed for four by the teenager from the first ball and lifted for six from Mandhana.

Her T20I career economy rate stands at 5.98, rising to 6.93 against India. Her wickets also cost significantly more, coming at 24.66 against Sunday’s opposition compared to a career 15.68.

The Adelaide-born star was the perfect personality for the crunch situation against the Proteas, and can reflect on a stellar tournament that has yielded nine wickets so far, the most in the tournament.

Australia have rallied together to compensate for the absence of Ellyse Perry, who often shares the new ball with Schutt, with Nicola Carey and Delissa Kimmince offering solid seam options.

Schutt wears her heart on her sleeve and when Perry hobbled onto the SCG outfield with tears of joy at her team’s fnal achievement, it tugged at her heart strings.

“I got off the field and Pez had tears in her eyes and that made me immediately tear up.You just don't see that emotion from Pez. For her, number one, to show the pain against New Zealand meant there was a serious injury there, she doesn't normally show her pain," the Australian pacer said.

“To come off the field and see the pure joy in her eyes, the tears as well, I could have cried at that moment and it shows the team character she is," Schutt concluded.

On a related note, India qualified for their first final at the Women's T20 World Cup after their semi-final clash against England at SCG was washed out without a ball bowled on Thursday. The Harmanpreet Kaur-led side progressed as they made a top-place finish in Group A after their victories over Australia, Bangladesh, New Zealand and Sri Lanka.