Chennaiyin became the first ISL side to enter the AFC Cup group stage after getting the better of Sri Lanka's Colombo FC in South Zone qualifying play-off on 1-0 aggregate last month. 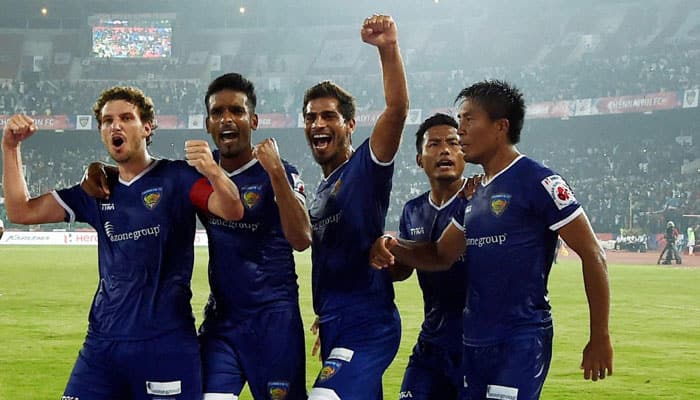 Chennaiyin became the first ISL side to enter the AFC Cup group stage after getting the better of Sri Lanka's Colombo FC in South Zone qualifying play-off on 1-0 aggregate last month.

Jeje Lalpekhlua scored the winner for Chennaiyin in the second leg here after the first leg had finished goalless. The Mizo striker, who is the senior-most player in the Chennaiyin squad, has two goals in his last two appearances, having also netted in the club's 2-0 Super Cup round-of-16 win over Mumbai City FC last week in Bhubaneswar.

Chennaiyin are also boosted by the return of defensive midfielder Dhanpal Ganesh from a long-term knee injury along with Jerry Lalrinzuala who was also out of action.

Ganesh got some valuable game time in the win over Mumbai City, having come off the bench in the second half. Ganesh and Jerry are integral additions to Chennaiyin's defensive setup, that has kept three clean sheets in their last three games in all competitions.

The CFC backline will be motivated to add to that tally when they take on Minerva. The CFC's young full-backs Laldinliana Renthlei and Tondonba Singh have also put in confident performances, with the latter having assisted two goals in the last two games which included Jeje's winner against Colombo FC.

"The team morale and confidence are high. We are raring to go for the AFC Cup group stage. It is important to get off to a good start against Minerva, who we will not underestimate," Chennaiyin head coach John Gregory said at the pre-match press conference.

"Our boys have been great defensively with the attack too getting back among the goals, with Jeje (Lalpekhlua) and CK (Vineeth) combining well. And to have Dhanpal (Ganesh) and Jerry (Lalrinzuala) back has only improved the atmosphere in the camp," he added.

Along with Chennaiyin, this will also be Minerva's maiden group stage campaign in the AFC Cup.

Minerva come into the group stage after defeat to Iran's Saipa FC in the AFC Champions League preliminary round in February.

The Punjab side have also brought in Trinidad and Tobago defender Robert Primus ahead of the AFC Cup group stage campaign. Interestingly, CFC midfielders Anirudh Thapa and Germanpreet Singh may feature against their former club, having played for Minerva Punjab in 2016-17 I-League season.