Unai Emery`s side needed only a point to reclaim the fourth spot from Chelsea but conceded three times before the break against a clinical Wolves side who moved up to seventh. 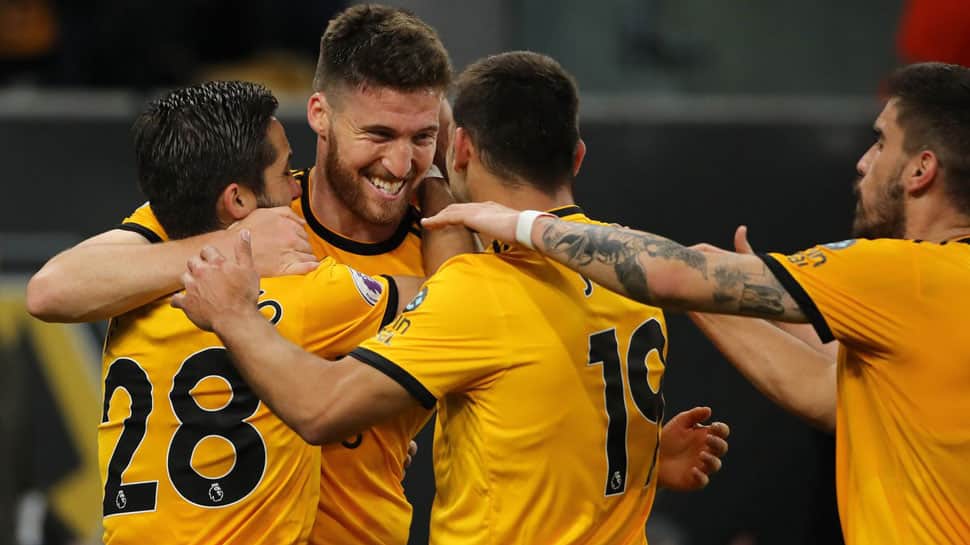 Arsenal`s fragility on the road returned as a 3-1 defeat at Wolverhampton Wanderers on Wednesday put a huge dent in their hopes of a top-four finish in the Premier League.

Unai Emery`s side needed only a point to reclaim the fourth spot from Chelsea but conceded three times before the break against a clinical Wolves side who moved up to seventh.

Ruben Neves opened the scoring with a superb 28th-minute free-kick before Matt Doherty`s glancing header made it 2-0 nine minutes later.

Dreadful Arsenal defending allowed Diogo Jota to surge through and fire a shot past Bernd Leno on the stroke of halftime.

A late Sokratis Papastathopoulos header from Granit Xhaka`s cross was scant consolation for the Arsenal fans who watched their side lose a seventh away league game this season.

With three games left Arsenal remain in fifth place with 66 points, a point behind Chelsea and four behind third-placed Tottenham Hotspur. Manchester United are sixth with 64.

Wolves rose to the seventh spot with 51 points -- a position that could offer a route into European football next season -- and are set to become the first promoted club to finish in the top eight since Reading in 2006-07.

Arsenal have now lost two matches in a row following Sunday`s home defeat by Crystal Palace and they may need the backup option of winning the Europa League to claim a place in next season`s Champions League.

Emery remained confident they can finish in the top four.

"We can be frustrated but the Premier League is about being consistent over 38 matches," the Spaniard said.

"Today we`re disappointed but we need to remember how we were three months ago. We can be optimistic and recover for the top four."

Arsenal dominated possession in the first 20 minutes but Joao Moutinho served notice of Wolves` threat as he curled wide after a flowing counter-attack.

Nacho Monreal was then penalised for a foul on Jota and Neves sent his curling free-kick past Leno.

Arsenal switched off at a corner in the 37th minute, allowing Moutinho and Jonny to exchange passes before the latter`s cross was glanced by Doherty past a flailing Leno.

Arsenal did tighten up after the break but the damage had already been done.

Incredibly Wolves have now picked up 16 points in their matches against the current top six this season with wins over Tottenham, Chelsea, Manchester United and now Arsenal.