Heurelho Gomes dreams of Wembley after bidding farewell to Watford

The 38-year-old says he is `99 percent` certain to retire at the end of the season, having played as an understudy to manager Javi Gracia`s first choice keeper Ben Foster. 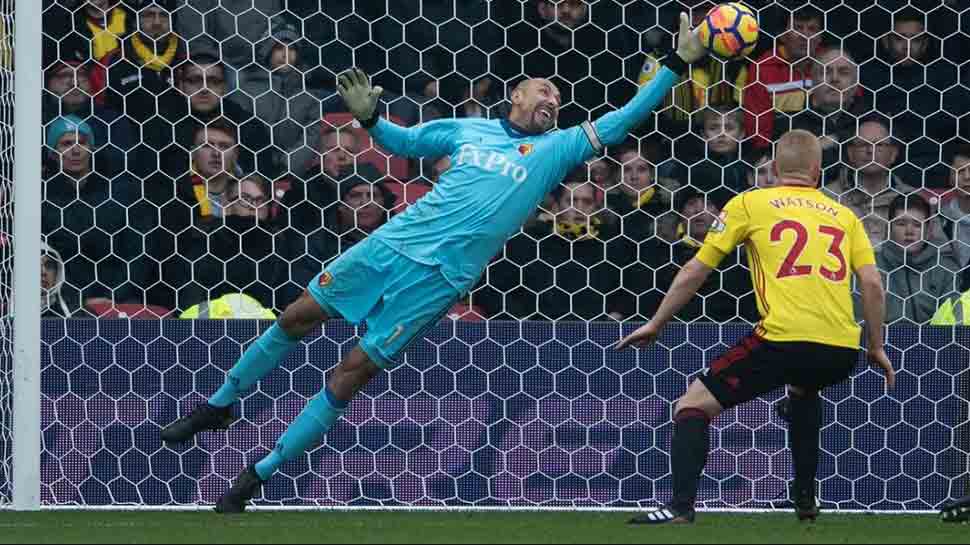 Heurelho Gomes may still have a part to play in Watford`s search for a first major trophy but the popular Brazilian appeared to say an emotional farewell at Vicarage Road on Saturday.

The 38-year-old says he is `99 percent` certain to retire at the end of the season, having played as an understudy to manager Javi Gracia`s first choice keeper Ben Foster.

He has played throughout the FA Cup run, however, and it is possible that he could keep his place for the Wembley semi-final after helping his side beat Crystal Palace 2-1.

There is every chance that Saturday might have been his last home game for the club though and the bald-headed Gomes spent several minutes on the pitch at the end milking the cheers of the fans after picking his two sons from the crowd.

"It`s sensational. I couldn`t ask for more," Gomes, who has said he plans to answer his "calling from Jesus" and become a pastor as well as a football agent, said.

"It was amazing today -- it was emotional, to be honest. It has been a great five years here."

"I am 99 percent sure I will retire at the end of the season but still one percent I haven`t decided. I am 38 so I think it is the end of my career here."

Gomes, who earned 11 caps for Brazil, was a popular, if occasionally accident-prone, figure at Tottenham Hotspur after joining them in 2008 from Dutch club PSV Eindhoven.

And the Watford fans sang his name loudly and with real affection after Saturday`s quarter-final win.

Gracia said afterwards that he did not know whether Gomes would continue in goal for the FA Cup semi-final.

"I don`t know what happens in the next game but Heurelho Gomes is very important -- playing, not playing, his experience and attitude," the Spaniard said.

"After the game, I wanted to recognise his important role this season. We have eight more Premier League games this season and the semi-final so we will see what happens."

With the possibility of an FA Cup final to end his career, Gomes said Watford had allowed him to dream again.

"Game by game when we started to play in this cup, I said this is special so why not dream about it? It was amazing today," he said.

"This club has been amazing, they gave me the opportunity to dream again when I planned to go back to Brazil in 2014. It has been an amazing five years."