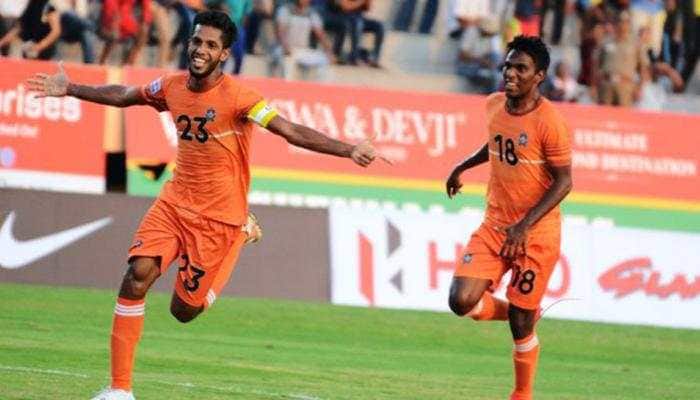 Chennai City fired in three goals in the first half through Pedro Manzi (34th minute, 41st, 45+1) who scored his fourth hat-trick of the season.

Neroca FC came back strongly in the second-half through Felix Chidi (52nd), followed by a goal each from Chencho and Aryn Williams in the 68th and the first minute of the added time respectively.

Neroca FC are now placed fifth in the points table with 26 points from 17 matches.

Neroca dominated the initial period of the match with left-winger Singham Subhash Singh troubling the Chennai defence with repeated forays down the left flank and channel.

Two such forays in the 17th and 20th minute found Katsumi Yusa's head. The Japanese was closer from the first one, making good contact on the near post but missed the target.

Then in the 26th minute, a wonderful ball from Aryn Williams found Chencho through and the Bhutanese sniper rounded the goalkeeper, but his attempted cross from a narrow-angle with the goal empty was cut out for a corner.

However in the 34th minute, as has been the norm this season and quite against the run of play, Chennai's three classy Spanish attackers combined for yet another wonderfully crafted goal to give the visitors the lead.

Sandro found Nestor Jesus on the left flank with a long ball from just inside their own half. The mercurial Nestor cut in and from just outside the box noticed Pedro Manzi's run inside the box and played him in.

Manzi swooped in and with a left-footed jab, slid the ball into the net from between keeper Lalit Thapa's legs for his 14th strike of the season. Nestor also recorded his sixth assist to go with his six goals.

Then disaster struck in the 41st minute as Neroca's Liberian defender Varney Kallon inexplicably gave the ball away to none other than Manzi with only the keeper in front of him. The striker drove forward, kept his cool and slotted home over the keeper's right shoulder.

Neroca then had a chance to get one back when Malem was in the clear inside the box thanks to another great Aryn Williams ball, but the midfielder's powerful strike towards goal was wonderfully saved by substitute keeper Kabir.

Pedro Manzi then completed his fourth hat-trick of the league in the first minute of the first half added time. Pandiyan broke away on the right and delivered a cross towards the goal and Manzi, ever present at the right place, struck his left foot out to beat Thapa on the near post.

Neroca, however, seemed to have other ideas and were not going down without a fight as they struck early in the second half through substitute Chidi.

Chencho played Chidi inside the box from the left in between two defenders. Chidi controlled, rounded the keeper and slid the ball with his left boot into the empty Chennai net for his sixth goal of the league campaign.

Another wonderful move initiated once again by Aryn Williams from the right, saw Chidi's header just go wide of the goal from close. Neroca were building good pressure now and after two successive corners, got their second through Chencho.

Singham Subash crossed it from the right flank, which was brilliantly headed back by Katsumi towards a lurking Chencho. He controlled and drilled the ball past Kabir for his second goal in as many games in his second stint with the I-League after being the star last season.

He then missed the chance to draw level after a defensive error saw him one on one with Kabir, who brought up a brilliant save to deny the hosts.

Just when Chennai seemed to have scraped through for a win in this game, Neroca struck back through Aryn Williams in the additional time (90+ 1) to bring the score to 3-all.