It was a measure of revenge for United, resurgent under interim coach Ole Gunnar Solskjaer, who lost to Chelsea in last May's Wembley final under their former boss Jose Mourinho. 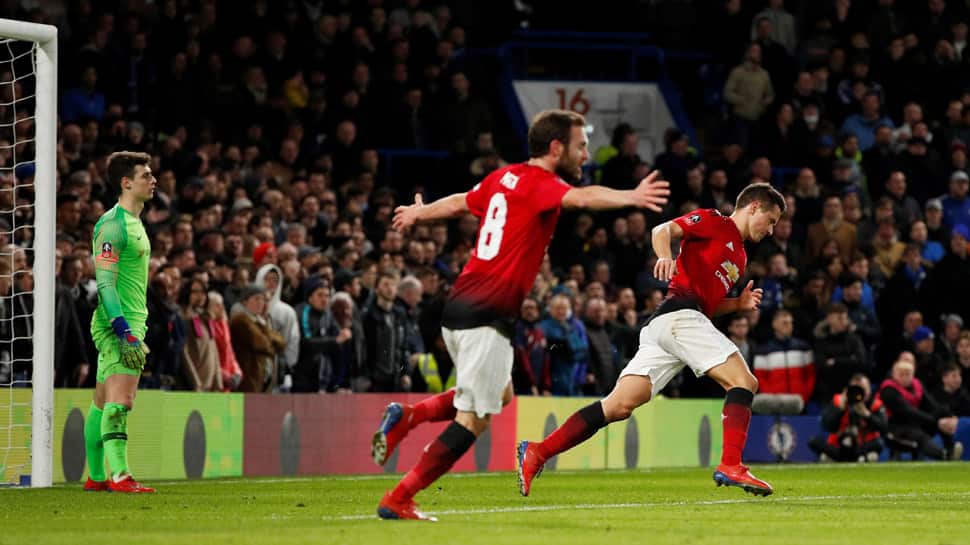 Manchester United's Ander Herrera and Paul Pogba headed first-half goals to claim a 2-0 win, that dumped FA Cup holders Chelsea out of the competition and secured a place in the quarter-finals in an intense tie at Stamford Bridge on Tuesday.

Spaniard Herrera finished off a fine move with a precise header from Pogba's cross, just past the half-hour and United's French midfielder scored himself when he nodded powerfully home from a Marcus Rashford delivery before the break.

It was a measure of revenge for United, resurgent under interim coach Ole Gunnar Solskjaer, who lost to Chelsea in last May's Wembley final under their former boss Jose Mourinho.

"It is a beautiful win. Today was a great performance from the team, all of them. The team helped me get to my best. I give everything for them. They help me score goals and get assists. We are enjoying playing together," France midfielder Pogba, who had been sidelined under Mourinho, told the BBC.

After the game United were drawn to face Wolverhampton Wanderers at Molineux in the quarter-finals.

"An away tie again after Arsenal and Chelsea. We'll have to do it the hard way, Wolves are a tough team to play against. The performance tonight was fantastic, our tactics worked. We asked our midfielders to press higher and get into the box and it worked. The defending in the second half was fantastic," Solskjaer said.

The fifth round defeat piled more pressure on Chelsea coach Maurizio Sarri, whose side were hammered 0-6 last week in the Premier League by United's neighbours Manchester City.

Chants of  'sacked in the morning' broke out in the second half.

United's Sergio Romero, had pulled off a fine double save in the 11th minute from a spinning David Luiz free kick headed for the top corner followed by a stinging shot from Pedro.

Three minutes later, Arrizabalaga had to fly to his left to keep out a Herrera strike.

Chelsea's fragile defence was split with crosses from either flank.

Pogba supplied the first in the 31st minute after a fast move down the left and Herrera ghosted into the box to nod the ball down past stranded goalkeeper Kepa Arrizabalaga.

Until that moment a lively game had been evenly poised, with a host of chances at either end.

Chelsea's hopes were crushed just before halftime in a speedy United counter down the right, with Marcus Rashford crossing for Pogba to head powerfully home between defenders Cesar Azpilicueta and Antonio Rudiger.

United were able to drop back and defend after the break, making occasional forays up the pitch but always confident of keeping an increasingly toothless Chelsea attack at bay.

The home side's best chance of the half came in the 63rd minute when Eden Hazard, reportedly a target for Real Madrid, jinked his way through, only for the Belgian's shot to be expertly diverted by United defender Victor Lindelof.

The Italian has been criticised for stubbornly sticking to his tactics and failing to change games.

United, on the other hand, looked like a team on a mission, playing for their coach and each other and brimming with the confidence that comes from turning an ailing season around.

Their only reverse since Norwegian Solskjaer took over was last week's Champions League home defeat by Paris St Germain.

The contrast was reflected in the boos from some Chelsea supporters at the final whistle, while a jubilant Solskjaer celebrated with his players in front of the travelling fans.

Serie A: Robin Olsen's heroics help Roma to a 2-1 win over Bologna