Russian side Krasnodar, who eliminated former European champions Porto in the last round, were thumped 4-0 at Olympiakos while Croatian champions Dinamo Zagreb beat Norway`s Rosenborg 2-0 in ties which will earn the winners a place in the lucrative group stage. 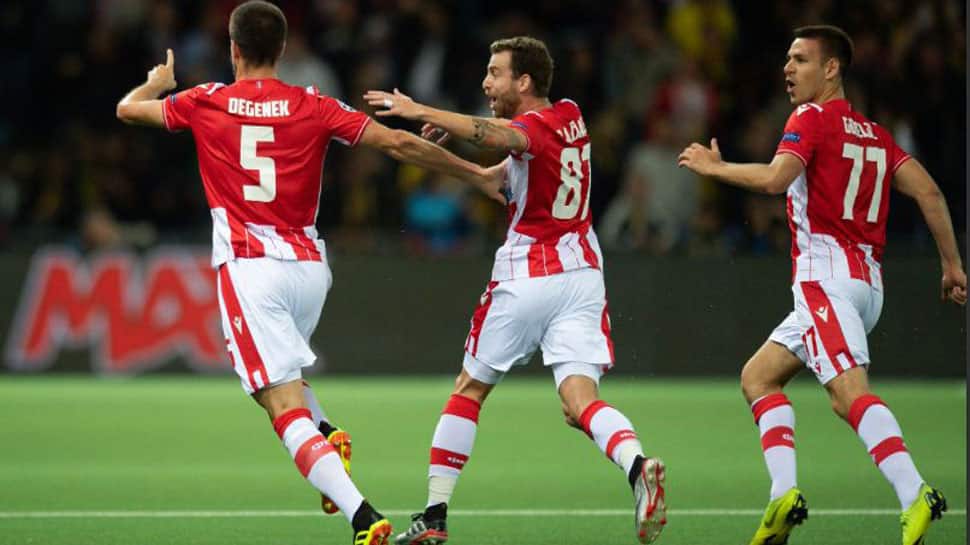 Red Star Belgrade`s Champions League qualifying odyssey continued on Wednesday when the former European champions drew 2-2 away to Young Boys after being pegged back by a late penalty in the first leg of the playoff round tie.

Russian side Krasnodar, who eliminated former European champions Porto in the last round, were thumped 4-0 at Olympiakos while Croatian champions Dinamo Zagreb beat Norway`s Rosenborg 2-0 in ties which will earn the winners a place in the lucrative group stage.

In a gripping match, Red Star fell behind to an early goal, then hit back to lead 2-1 before Young Boys substitute Guillaume Hoarau levelled with his first touch of the ball.

While the Swiss side had qualified directly for the playoff round, Red Star battled their way through three rounds, overcoming opponents from Lithuania, Finland and Denmark with the last tie against FC Copenhagen going to a remarkable 22-penalty shootout.

Both teams took part in the group stage for the first time last season and it was Young Boys who went ahead in the seventh minute when Roger Assale was sent clear of the defence and the Ivorian forward drove his shot past Milan Borjan.

Milos Degenek levelled 11 minutes later with a looping header at the far post which caught goalkeeper David van Ballmoos out of his ground. Borjan made three outstanding saves to keep Red Star level at halftime and they went ahead immediately after the restart.

Marko Gobeljic sent in a low cross from the right and Argentine Mateo Garcia turned it in at the far post for a goal on his debut.

The drama continued as Nicolas Moumi Ngamaleu burst into the Red Star area and went down under a challenge from Richmond Boakye. The referee initially gave a goal kick but changed his mind after a VAR review and Hoarau fired in the equaliser.

A late flurry from group-stage regulars Olympiakos virtually settled their tie against Krasnodar.

Miguel Angel Guerrero curled in the first on the half-hour and, although Krasnodar kept it down to a single goal until the 78th minute, they were undone by a brace from substitute Lazar Randjelovic.

The Serb opened his account two minutes after coming on and netted the second from outside the penalty area in the 86th minute. Daniel Podence produced a neat dinked finish for the fourth.

Dinamo Zagreb`s hopes of qualifying for the seventh time got an early boost when Marius Lundemo bundled over Bruno Petkovic who converted the penalty himself in the eighth minute.

The Croatian champions added a second with a route one goal as goalkeeper Dominik Livakovic`s clearance came off the head of a defender and fell into the path of Mislav Orsic who shot under Andre Hansen.