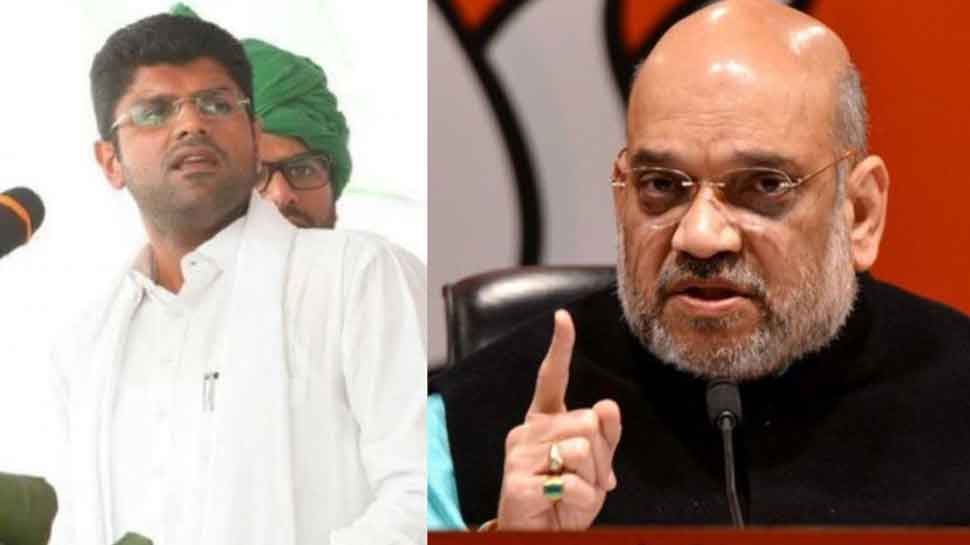 NEW DELHI: With his party falling short of getting a clear majority despite emerging as the single-largest party in Haryana, its president and Union Home Minister Amit Shah reportedly met Jannayak Janata Party (JJP) chief Dushyant Chautala in the national capital late on Thursday.

According to sources, the BJP is eyeing support of independents and parties like JJP to form the government in Haryana and Dushyant Chautala's party has also given enough indications that it may support the saffron party in Haryana. Zee News sources said that if the two sides decide to come together, the BJP may reward JJP chief with some important portfolio in the next Haryana government.

It may be recalled that JJP – a new entrant in the Haryana politics – has emerged as the 'kingmaker' as it won ten assembly seats in the closely-contested elections here, the results of which were declared on Thursday.

The BJP, which is six short of a majority in the 90-seat Haryana assembly, is keeping all options open at the moment. In case of no agreement with JJP, the party can seek the support of independents for government formation.

The BJP finished with 40 seats, much less than its projected target of '75' seats and seven short of its 2014 tally.

Senior BJP leaders said that while Jannayak Janata Party (JJP) could be an option, the party would talk to independents before exploring an alliance with the regional party.

INLD and Haryana Lokhit Congress have won one seat each in the results declared on Thursday while seven seats have gone to independents in Haryana.

Gopal Kanda, who won from Sirsa as Haryana Lokhit Party candidate, has already expressed support to BJP in Haryana.

In a related development, the BJP Parliamentary Board, which met on Thursday evening after the party's victory in Maharashtra and Haryana assembly polls in Haryana, had authorised party chief Amit Shah to make all decisions regarding the two states.

Sources said Shah has been authorised to appoint party observers for the two states.

They said the BJP-led government will be formed in both the states and the two chief ministers - Devendra Fadnavis in Maharashtra and Manohar Lal Khattar in Haryana - will continue on their posts.

The meeting was also attended by Prime Minister Narendra Modi and other members of the board.

BJP will now have to look for 'jugad' to form government in Haryana: MP CM Kamal Nath