2019, a year of big developments - Ayodhya verdict, Balakot strikes, enactment of CAA and many more

The major events include - India conducting airstrikes at a terror camp at Balakot in Pakistan, repeal of Article 370 in Jammu and Kashmir and enactment of Citizenship Amendment Act, Ayodhya verdict, the final list of NRC was published in Assam, Karatarpur Corridor was opened and the triple talaq bill passed. 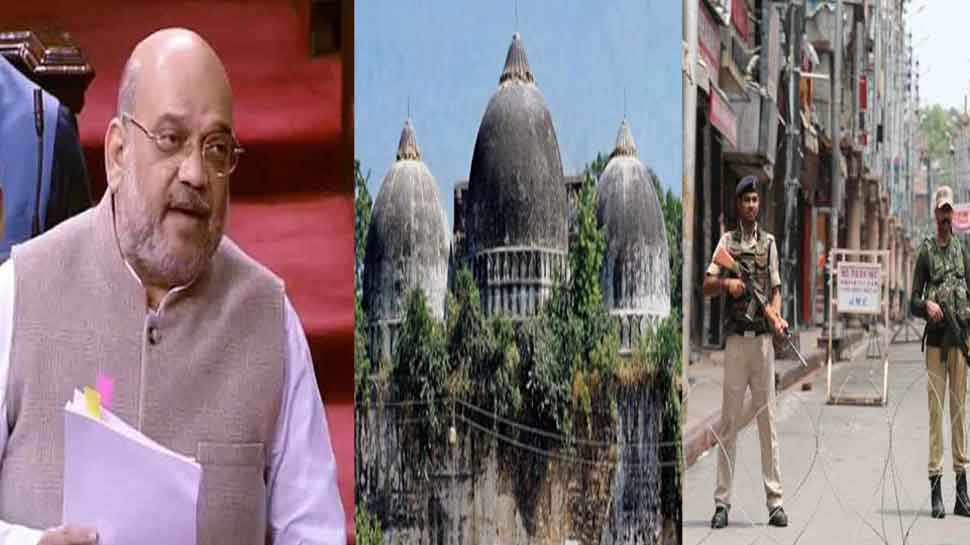 New Delhi: It was a year of significant developments with Supreme Court delivering verdict in the long-pending Ayodhya case, Prime Minister Narendra Modi returning to office with a bigger majority, India conducting airstrikes at a terror camp at Balakot in Pakistan, repeal of Article 370 in Jammu and Kashmir and enactment of Citizenship Amendment Act.The final list of NRC was published in Assam, Karatarpur Corridor was opened and the triple talaq bill passed. BJP and Shiv Sena sparred over government formation in Maharashtra and the BJP saw a dent in its winning streak by losing the Jharkhand assembly polls. The opposition sought to come against the government on a range of issues including the CAA and protests against the Act also saw violence in some parts of the country. ISRO`s Chandrayaan-2 mission could not succeed fully as Vikram lander could not make a soft landing on the moon. Congress continued to face problems with its second successive debacle in Lok Sabha polls and Rahul Gandhi stepped down as Congress chief. Here are some big developments of 2019.

The government`s interim budget, presented on February 1, came with a major initiative for farmers in the form of Pradhan Mantri Kisan Samman Nidhi (PM-KISAN) scheme. It provides income support of Rs 6,000 per year to farmer families in three equal instalments of Rs 2,000 each every four months.

On February 14, Pakistan-based terror outfit Jaish-e-Mohammad (JeM) targeted a CRPF convoy on Jammu-Srinagar highway near Pulwama in South Kashmir killing 40 CPRF personnel. Days later Indian Air Force (IAF) launched an airstrike on a JeM camp in Balakot in Pakistan`s Khyber Pakhtunkhwa Province. The airstrike was launched in early hours of February 26 and Pakistan`s efforts to launch an offensive next day and target Indian military installations in Jammu and Kashmir was thwarted by an alert IAF.In the dogfight, Wing Commander Abhinandan Varthaman, flying a MiG-21 Bison fighter plane and chasing Pakistani jets, crossed over to PoK where his aircraft was shot down. He was taken into custody by Pakistan. India also shot down a Pakistani fighter jet.

Wing Commander Varthaman was released by Pakistan on March 1 after intense diplomatic pressure and his return to India was watched on television sets across the country. He was later awarded the third-highest wartime gallantry award Vir Chakra.

On March 27, Prime Minister Narendra Modi addressed the nation and announced that anti-satellite weapons launched by A-SAT successfully had destroyed a live satellite on a low-earth orbit. India joined a select group of three countries - US, Russia, and China--which have such ability.

Voting for general elections started on April 11. Over the next month, people across the length and breadth of the country took part in the biggest democratic exercise of the world. Four states -- Andhra Pradesh, Odisha, Arunachal Pradesh, and Sikkim - also went to the polls.

The results of elections were declared on May 23 and BJP created history by winning an absolute majority on its own for a second successive time. The party won 303 seats and Congress could win only 52, eight more than it won in 2014 polls. Congress leader Rahul Gandhi lost from the family stronghold of Amethi to union minister Smriti Irani. He resigned later as party chief, taking moral responsibility for the party`s performance.YSR Congress swept Assembly poll in Andhra Pradesh, Naveen Patnaik- led Biju Janata Dal (BJD) retained Odisha, BJP won a majority in Arunachal Pradesh and Sikkim Krantikari Morcha (SKM) ousted Pawan Kumar Chamling government in Sikkim.

On June 11, doctors at NRS Medical College and Hospital in Kolkata went on a strike after two of their colleagues were attacked and beaten up by kin of a deceased over alleged medical negligence. The stir spread from Kolkata`s NRS hospital to all medical colleges in West Bengal and got the support of medical fraternities across the country. The nationwide strike crippled outdoor patient services (OPD) across hospitals in India. The NRS Medical College doctors called off their week-long agitation after assurances of safety from West Bengal Chief Minister Mamata Banerjee.

India, which had a good run in the Cricket World Cup, lost to New Zealand in the semi-final causing disappointment to millions of people in the cricket-loving nation.The month also saw the collapse of Congress-Janata Dal (Secular) government in Karnataka following a series of resignations by legislators of the two parties. It paved the way for BS Yediyurappa again assuming reigns of the state as Chief Minister. On July 28, a girl from Unnao who was raped by then BJP MLA Kuldeep Sengar in 2017, was critically injured in a truck-car collision in Rae Bareli. The accident caused widespread anguish and concern in the country. Sengar was convicted to life imprisonment by a Delhi court in December.The bill to criminalise triple talaq bill was also passed by parliament.

The parliament adopted a resolution to repeal Article 370, which gave special status to Jammu and Kashmir. The major move came weeks after the BJP-led government came to power for the second time. The parliament also passed a bill for bifurcation of Jammu and Kashmir into two union territories. The two union territories of Jammu and Kashmir and Ladakh came into existence as UTs on October 31.In Assam, the final list of National Register of Citizens (NRC) to identify illegal immigrants was published on August 31 in which more than 19 lakh people were excluded.

The country eagerly kept track of India`s ambitious moon mission Chandrayaan 2 on September 7 night to witness Vikram Lander`s soft landing near the south pole of moon but minutes before its scheduled landing, ISRO lost contact with the Vikram lander.On September 22, Prime Minister Narendra Modi addressed over 50,000 people at NRG Football Stadium in Houston, US at `Howdy, Modi!` event. The event, which was the largest gathering ever for an elected foreign leader visiting the US, also saw the participation of President Donald Trump.

The people of Haryana and Maharashtra voted to form the government in states. In Haryana, no party got a clear majority in the 90-member Assembly. BJP, which emerged as the single-largest party, entered into a post-poll alliance with Dushyant Chautala`s Jannayak Janata Party and formed the government.BJP-Shiv Sena alliance emerged victorious in Maharashtra. However, the allies drifted apart on the issue of chief ministerial post. After days of uncertainty and in a surprise development Devendra Fadnavis formed the government with the support of Nationalist Congress Party`s Ajit Pawar.This came even as Congress, NCP and Shiv Sena were talking to form a non-BJP government. Fadnavis resigned days later and the three parties formed a government in the state under the leadership of Shiv Sena`s Uddhav Thackeray.

On November 9, the Supreme Court of India delivered a landmark verdict in decades-old Ram Mandi-Babri Masjid dispute. A five-judge bench of the apex court unanimously ruled in the favour of Ram Lalla and handed over the entire disputed land to a trust which would be set up by the government. The Supreme Court also said that the demolition of Babri Masjid in 1992 as an "egregious violation of rule of law" and ordered the government to provide five acres of land for the construction of a mosque at a prominent location in Ayodhya. A clutch of petitions were filed against the verdict, but the apex court dismissed them. Also on November 9, Kartarpur Sahib Corridor, a 4.7-kilometre-long passage that connects Dera Baba Nanak Sahib in India`s Gurdaspur and Gurdwara Darbar Sahib in Pakistan`s Kartarpur ,was opened for pilgrims. The growth data, released on November 29, showed that India`s July-September 2019 (Q2) gross domestic product growth rate had fallen to 4.5 per cent.

The Citizenship Amendment Bill that grants citizenship to non-Muslim refugees from Bangladesh, Pakistan, and Afghanistan was passed by parliament.The passage of the bill was followed by protests in various parts of the country with the BJP accusing the opposition of misguiding people. The protests saw violence at some places. The opposition also accused the government of bringing the National Register of Citizens. After the cabinet gave its approval to Census 2021 and National Population Register (NPR), the opposition again raked up the issue of NRC. The government ruled out any link NPR and NRC. The assembly election results in Jharkhand saw the JMM-Congress-RJD alliance coming to power under the leadership of Hemant Soren.