6 dead, over 4 lakh affected as flood situation in 21 districts of Assam remains grave

The situation is feared to remain grim for few more days as the water level of the Brahmaputra river flowing through Guwahati has crossed the warning mark. 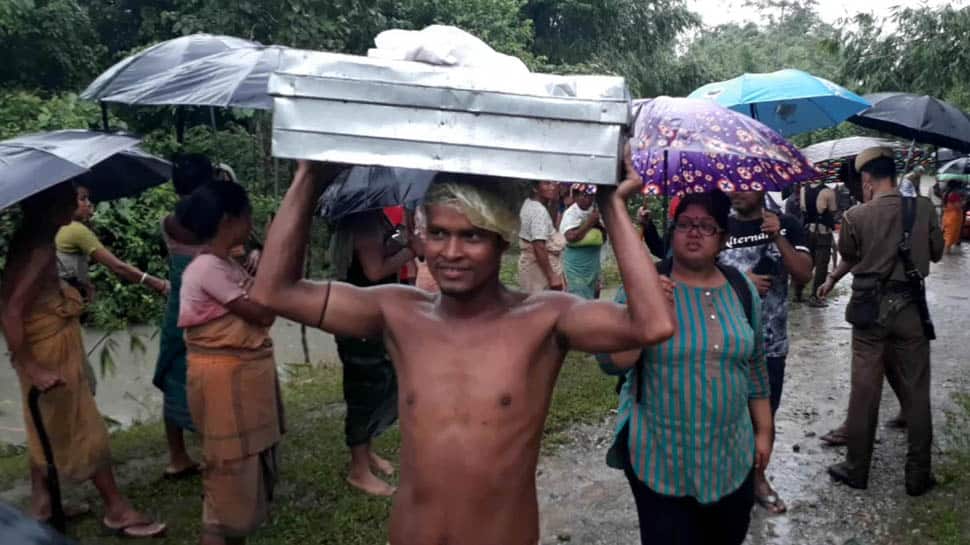 GUWAHATI: At least six people have lost their lives till Friday and over four lakh have been affected due to flood which has hit across 700 villages in 21 districts of Assam. The worst affected districts are - Dhemaji, Lakhimpur, Biswanath, Sonitpur, Darning, Baksa, Barpeta, Nalbari, Chirang, Bongaigaon, Kokrajhar, Goalpara, Morigaon, Hojai, Nagaon, Golaghat, Majuli, Jorhat, Sivsagar, Dibrugarh, Tinsukia.

The situation is feared to remain grim for few more days as the water level of the Brahmaputra river flowing through Guwahati has crossed the warning mark. “Water has crossed warning level, it is still not at the danger level. In one to two days, it can cross danger level here too,” said V Gandhiya, Section Officer, Inland Waterways Authority. It is to be noted that the river had already crossed the danger mark at Nimati Ghat in Jorhat. The water level of other rivers like Dikhow, Dhansiri, Jia Bharali, Puthimari and Beki is also above the danger mark.

On Thursday, one person was injured and two houses were destroyed following a landslide in Dipar Bil area near Guwahati. The flood has destroyed a total of 13,267.74 hectares of crop area so far, according to an Assam State Disaster Management Authority (ASDMA) report. According to India Meterological Department, the situation is likely to worsen as the state is set to receive more rainfall in the coming days.

Meanwhile, Assam Chief Minister Sarbananda Sonowal has directed the District Commissioners to activate round-the-clock control rooms for immediate response to the flood situation in their districts. He has also asked the government officers to update the stock of medicines in the hospitals and ensure availability of doctors.

The flood has also led to a rise in Acute Encephalitis Syndrome (AES) and Japanese Encephalitis case in Assam.  At least 14 children have died and over 189 cases have been reported so far.