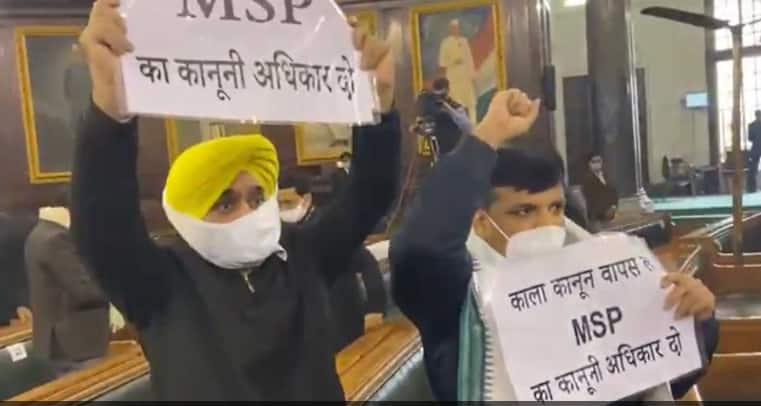 The Prime Minister also released a book, "Atal Bihari Vajpayee: A Commemorative Volume", to mark the occasion. As the Prime Minister was about to leave the venue after releasing the book, the AAP members raised slogans demanding the repeal of the three new farm laws.

In a tweet, AAP Rajya Sabha MP Sanjay Singh said (in Hindi), "To wake up the dictator government and to awaken the deaf ears, the commotion in front of the Prime Minister in Parliament, "Take back anti-farmer black law", stop calling the farmers as terrorists."

When the Prime Minister was about to leave the Parliament hall, Lok Sabha MP from Sangrur Bhagwant Mann tried to seek his attention saying, "Prime Minister sir, millions of farmers are dying in the cold. They are dying. Sir, please take back the three laws Sir, listen to us, Mr Prime Minister."

PM Modi left the Parliament house, speaking with Leader of the Opposition in Rajya Sabha Ghulam Nabi Azad and leader of Congress party in Lok Sabha Adhir Ranjan Chowdhury. Besides Azad and Chowdhury, Samajwadi Party patriarch Mulayam Singh Yadav and LJP's Chirag Paswan were among other lawmakers present at the event.

The leaders first paid tributes to Malaviya and then to Vajpayee on their portraits in the Central Hall.

The Prime Minister today addressed the protesting farm unions and squarely blamed those with political agenda for the deadlock in the Centre's talks with protesting farmers. He asserted that his government is willing to hold dialogues with all, including those staunchly opposed to it, as long as talks are based on farm issues, facts and logic.

In a blistering speech targeting Opposition, PM Modi said when the agitation began farmers had some genuine demands like guaranteed minimum support price but people with political motives then took over and began making unrelated demands like the release of those accused of violence and making highways toll-free.

Reacting to the prime minister's allegations that political rivals were misusing the protest to push their agenda, farmer leader Abhimanyu Kohar said unions do not allow any political party to use their stage and accused the government of diverting the issue.

Thousands of farmers are camping on various Delhi borders for almost a month to protest against the three farm laws. At least five rounds of formal talks have failed to break the deadlock with the farmer groups refusing to accept anything less than the complete repeal of the laws.

The three farm laws, enacted in September, have been projected by the Centre as major reforms in the agriculture sector that will remove the middlemen and allow farmers to sell their produce anywhere in the country.