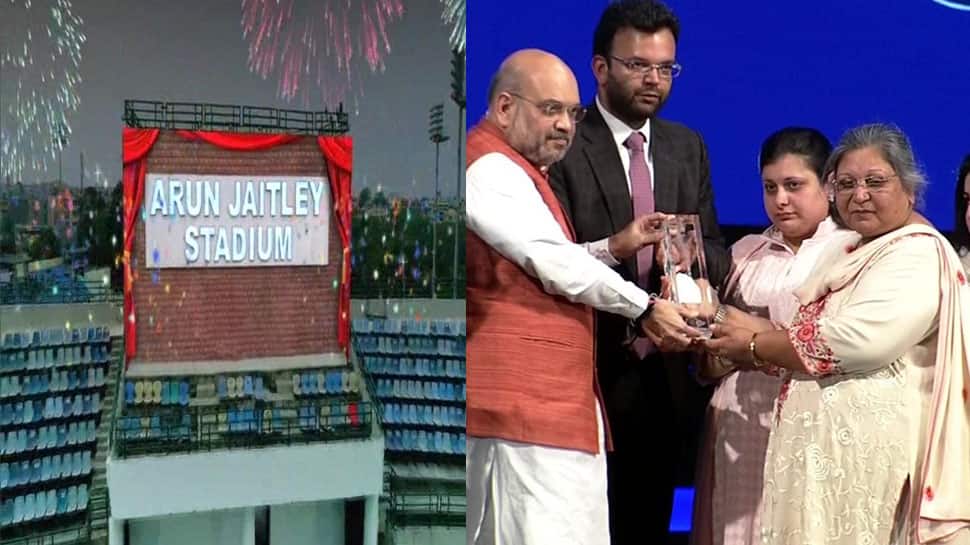 NEW DELHI: In a big tribute to senior BJP leader and former Finance Minister Arun Jaitley who died recently, the Feroz Shah Kotla Stadium in New Delhi was renamed after him at a ceremony which was organised at the Jawaharlal Nehru Stadium on Thursday.

Besides top politicians of the country, the event was attended by Team India captain Virat Kohli along with his actress wife Anushka Sharma. The entire cricket team was present on the occasion.

During the ceremony, a stand was also named after Kohli for his valuable contribution towards Indian Cricket.

BJP president and Home Minister Amit Shah was the chief guest on the occasion and the event was also attended by Union Sports Minister Kiren Rijiju.

It may be recalled that Jaitley had served as the president of the District Cricket Association (DDCA) as well as the vice-president of the Board of Control for Cricket in India (BCCI).

The DDCA had previously confirmed that while the stadium will be named as the Arun Jaitley Stadium, the ground will still be called the Feroz Shah Kotla. The DDCA took the decision to honour Jaitley - who breathed his last on August 24 after a prolonged illness.

Jaitley served as the president of DDCA from 1999 to 2013 and during his tenure at DDCA, he played a major role in revamping the infrastructure of the stadium.

"We want to make it a riveting event where we pay the best tributes possible to keep Jaitley Ji`s memory alive. Anybody who is even remotely connected with cricket knows how his contributions have helped Delhi cricket and its cricketers. Naming the stadium after him will serve the cause and purpose," DDCA president Rajat Sharma had announced in an official statement.

Earlier, when DDCA had made the announcement, Sharma had said that Jaitley's support and encouragement had inspired players like Virat Kohli, Virender Sehwag, Gautam Gambhir, Ashish Nehra, Rishabh Pant to make "India proud."

66-year-old Jaitley passed away at the AIIMS hospital in New Delhi on August 24.

A four-time member of Rajya Sabha, he became a Cabinet minister in the government of former Prime Minister Atal Bihari Vajpayee in 2000. He was Leader of the Opposition in the Rajya Sabha from June 2009-2014. Jaitley was also the Finance and Corporate Affairs minister in the first term of Modi government and also held portfolios of Defence and Information and Broadcasting.