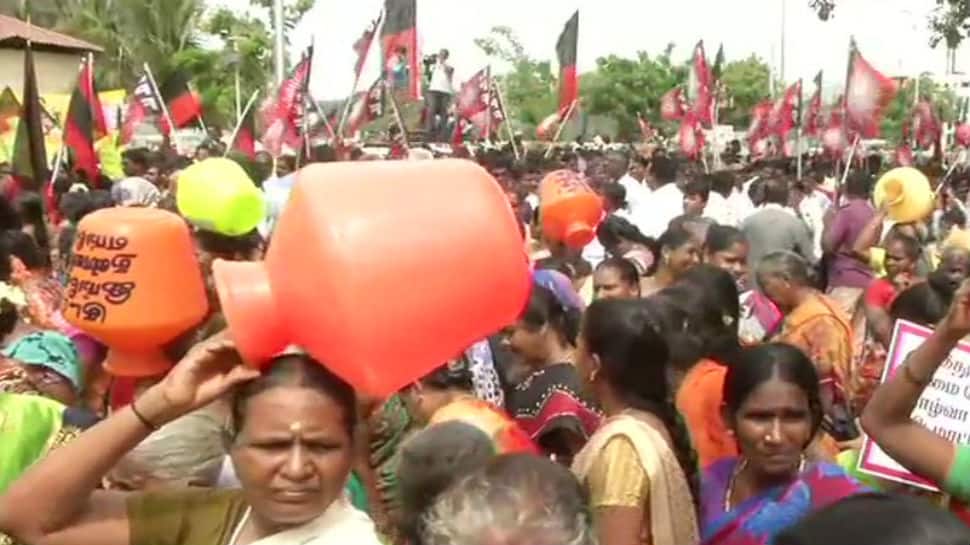 The Dravida Munnetra Kazhagam (DMK) on Monday upped the pressure against the Tamil Nadu government over the prevailing shortage of water in Chennai and other parts of the state by holding a massive protest in the city.

The protest was organised in Chepak with hundreds of party cadre in attendance. The protesters claimed that the AIADMK government has failed to address the crisis and that locals in the city have been suffering enormously due to it. Around the same time - on Monday, DMK's TR Baalu also gave notice in Lok Sabha over the prevailing water crisis in the state.

DMK has been leading the attack against the government under Chief Minister Edappadi K Palaniswami who has claimed that he is doing all that is required to find a solution. Last week, Palaniswami said his government will bring in 10 million litre (MLD) water per day via rail network from Jolarpet in Vellore district to tackle the water scarcity. He also said required sanctions have been given for desilting water bodies and quarries, and that Rs 500 crore has been sanctioned for it.

These are efforts too less too late for the DMK.

Meanwhile, Kerala has offered to supply water to its neighbouring state, a move welcomed by Tamil Nadu. Palaniswami had asked the Kerala government to store water to the maximum level in the Mullaperiyar dam. (Read full report here)

The ground situation in Tamil Nady, especially in Chennai, continues to remain grim in the meantime with several IT companies telling their employees to work from home.  All eyes are now on Monsoon rains which have been delayed in India due to numerous factors.