Exclusive CCTV footage accessed by Zee Media from four cameras located near Jamia Millia Islamia University of New Delhi show the truth behind the protests against the amended citizenship act where miscreants clashed with the police on December 15, Sunday. 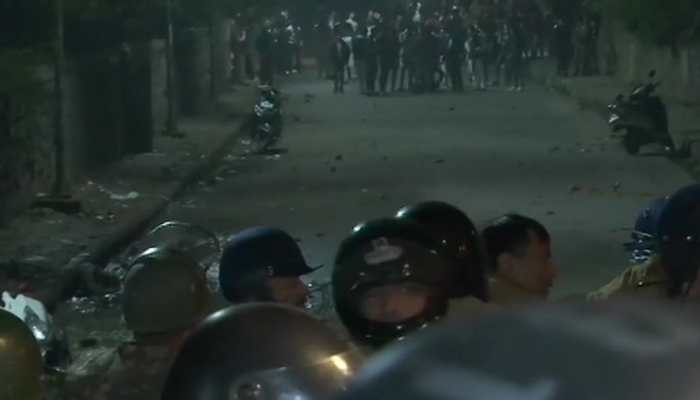 NEW DELHI: Exclusive CCTV footage accessed by Zee Media from four cameras located near Jamia Millia Islamia University of New Delhi show the truth behind the protests against the amended citizenship act where miscreants clashed with the police on December 15, Sunday.

The CCTV cameras have revealed the elements behind Jamia violence of December 15, Sunday afternoon which shows how miscreants instigated the violence, arson, stone-pelting and tore apart the law and order situation near Jamia Nagar area.

The second CCTV camera showing the footage of Mata Mandir Road at New Friends Colony of Decembe 15 at 4:30 om which reveals violent protestors attacking the police force by pelting stones. The miscreants can also be seen breaking plant pots of residents outside their houses.

The third CCTV camera is also of New Friends Conly, Mata Mandir Road, where some miscreants can be seen taking out petrol from a bike parked in front of Mata Mandir, The footage shows that a few miscreants fill up an empty bottle with petrol from the bike and then walk towards a DTC bus parked nearby. After walking towards the bus, a man can be seen entering the bus.

The fourth CCTV camera also belongs to the Mata Mandir Road in New Friends Colony in which it can be clearly seen that some miscreants came near a bike parked there and then a miscreant sets fire to it. The bike catches fire as soon as it it list, and then the miscreant who had set the bike on fire can be seendragging the burning bike towards the DTC bus.

Thousands of protesters from the area surrounding the university attempted to march towards Jantar Mantar but were stopped by police barricades put up near The Surya Hotel located about a kilometre from the university’s gates on December 15, Sunday.

The protest against the Citizenship Act turned violent after the agitators set ablaze four buses near New Friend Colony. Some of the miscreants also joined a protest by Jamia Millia Islamia University at the campus, which later became violent. Locals of Sarai Julema in Jamia Nagar area clashed with police. The situation turned critical when the police got into action. Several Jamia students were also said to have been injured in the clash.

Speaking to the media, Chinmoy Biswal, Delhi Commissioner of Police South East, had said that a mob of around 2,000 people turned violent and targeted public transport buses. "This mob was violent. Around 6 policemen have been injured in the stone-pelting. We are yet to ascertain the identities," he said.

The Delhi Police had on December 17, submitted a detailed report to the Ministry of Home Affairs (MHA) on Jamia Nagar violence which rocked New Delhi on Sunday evening. The Delhi Police in its report said that 31 personnel, 67 people were injured during the clash. The cops also underwent Medico-Legal Case (MLC).

At least 14 buses and 20 cars were vandalised by the angry mob, the police had further said.