The Rajya Sabha has a strength of 245 members and the BJP is the single largest party with 71 MPs. 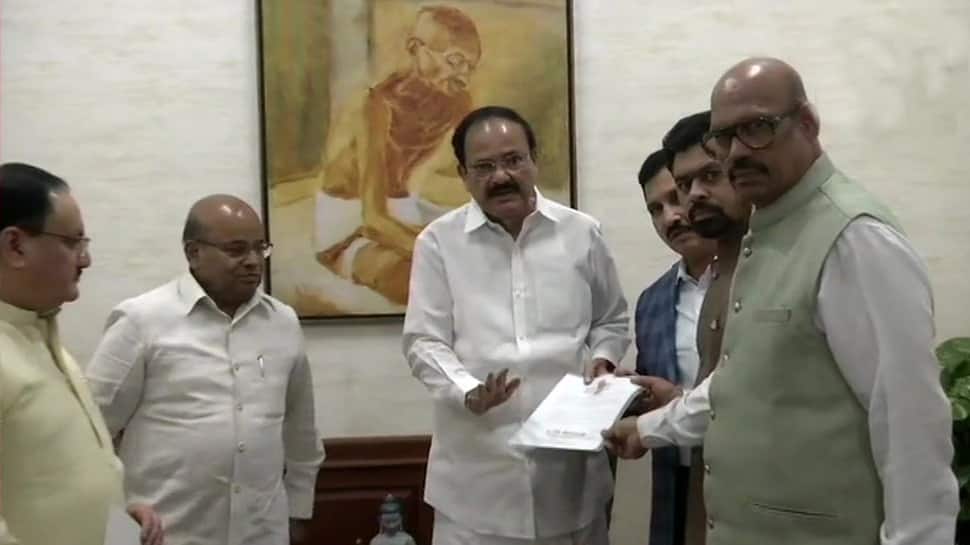 NEW DELHI: In a setback for the Telugu Desam Party (TDP), four of its six Rajya Sabha members of Parliament have split from the party and are set to join the Bharatiya Janata Party (BJP). The TDP legislators met Vice President M Venkaiah Naidu to submit the letter to merge TDP Legislature Party with the BJP.

After meeting Naidu, TDP MPs YS Chowdary, CM Ramesh, TG Venkatesh joined the saffron party in the presence of BJP Working President JP Nadda. TDP Rajya Sabha MP GM Rao will join the party formally later as he is unwell. Speaking to news agency ANI, Venkatesh had earlier said: "I will join BJP. I have been a former member of ABVP and BJP youth wing".

In its letter to Naidu, the TDP MPs said: "The Legislature Party of Telugu Desam in Rajya Sabha met today under the Leadership of Legislature Party's Leader, Shri Y.S Chowdary and Legislature Party's Deputy Leader Shri CM Ramesh. Inspired and encouraged by the impeccable leadership of Shri Narendra Modi ji and the developmental policies being pursued by him in the overall interest of the nation, we have decided to merge with the Bharatiya Janata Party (BJP) with immediate effect under Paragraph 4 of the Tenth Schedule to the Constitution of India."

The TDP, which is led by former Andhra Pradesh Chief Minister N Chandrababu Naidu, has six members in the Upper House of Parliament. With four of them breaking away, it meets the legal requirement of anti-defection law, which mandates the support of at least two-third members for a split to be recognised in Parliament.

The Rajya Sabha has a strength of 245 members and the BJP is the single largest party with 71 MPs.