New Delhi had strongly condemned the terror attack on the Chinese consulate at the time of the incident. 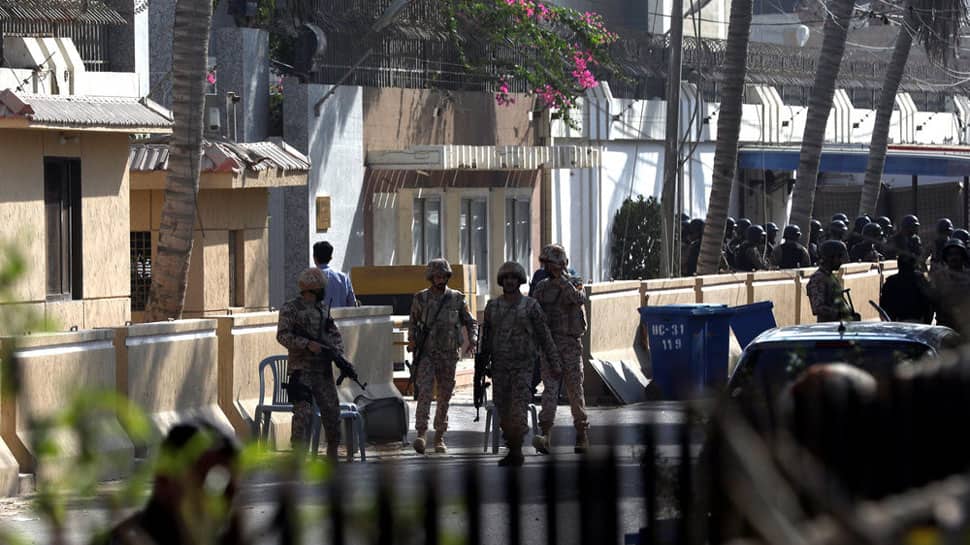 Paramilitary soldiers and police officers gather outside, after an attack on the Chinese consulate, in Karachi November 23, 2018. (Reuters photo)
Share:
Written By:

New Delhi rejected the allegations levelled by a senior Pakistan police official against India in connection with the November 2018 terrorist attack on the Chinese Consulate in Karachi.

“We have seen statements in Pakistani media attributed to the Police chief of Karachi making false allegations against India for the terrorist attack on the Chinese Consulate in Karachi in November 2018. We completely reject these fabricated and scurrilous attempts to levy accusations on India,” said the Minister of External Affairs in a statement on Friday.

“Instead of maliciously pointing fingers at others for such terrorist incidents, Pakistan needs to look inwards and undertake credible action against support to terrorism and terror infrastructure in its territories,” it added.

Earlier in the day, Karachi police chief Amir Sheikh accused Indian intelligence agency Research and Analysis Wing (RAW) of being involved in the November terrorist attack on the Chinese consulate in Karachi, reported news agency PTI. Three terrorists had tried to storm the consulate in the city's posh Clifton area but security forces foiled their attempt by killing all of them in a gunbattle. Two police officials and two visa applicants died in the incident.

Pakistan police later arrested five persons, suspected to be associated with the Baloch Liberation Army, a Balochistan-based group which had claimed responsibility for the attack at the time. They had claimed the attack was carried out to "sabotage" the China-Pakistan Economic Corridor (CPEC).

At a press conference, Sheikh alleged that attack was planned in Afghanistan and executed with the help of India's RAW.

"The aim was to sabotage the China-Pakistan Economic Corridor and create the impression in China that Karachi is not safe," he said.

New Delhi, on the contrary, had strongly condemned the terror attack on the Chinese consulate.

"There can be no justification whatsoever for any act of terrorism. The perpetrators of this heinous attack should be brought to justice expeditiously," the Ministry of External Affairs had said in a statement last November.