According to the Ministry of Defence's Department of Defence Production dashboard, India's export of military equipment increased from Rs 1521.86 in Financial Year 2016-17 to Rs 8,620.59 in the last fiscal 2019-20. India's defence exports have increased in the last four years has been more than 5-and-half times while the target for FY 2020-21 is Rs 15,000 crore, according to the data updated by the Department of Defence Production on April 14, 2020. 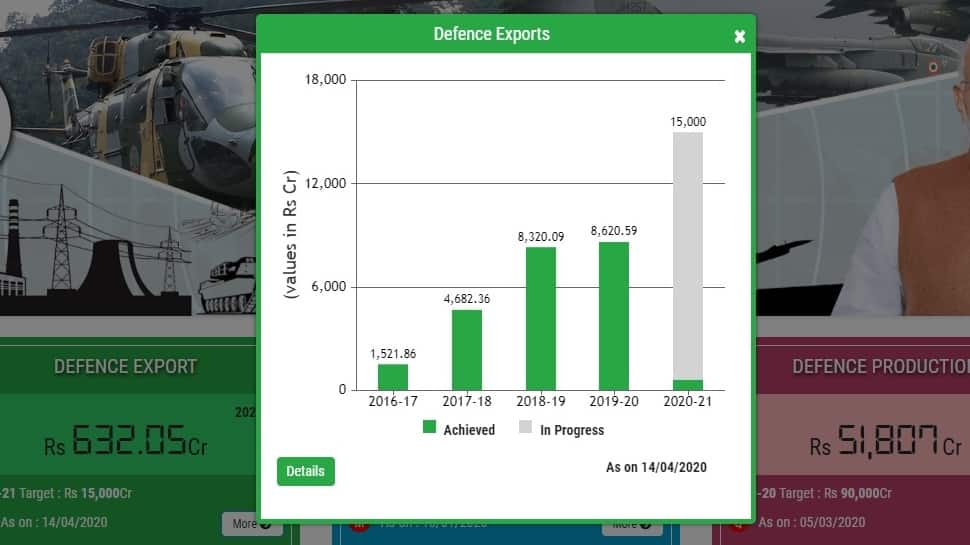 From one of the world's biggest importer of defence hardware and equipment, India is slowly emerging as an exporter now and has seen a growth of over five times in its order books in the last four years. According to the Ministry of Defence's Department of Defence Production dashboard, India's export of military equipment increased from Rs 1521.86 in Financial Year 2016-17 to Rs 8,620.59 in the last fiscal 2019-20.

India's defence exports have increased in the last four years has been more than 5-and-half times while the target for FY 2020-21 is Rs 15,000 crore, according to the data updated by the Department of Defence Production on April 14, 2020. The increase in the last few years has been mainly due to Prime Minister Narendra Modi's emphasis on Make in India.

In the last two years, several steps have been taken to boost India's defence sector. Minister of State (Defence) Shripad Naik in a written reply to P Bhattacharya in the Rajya Sabha on March 16, 2020, stated that the measures mentioned below have been taken.

Industrial licensing: Industrial licensing regime for Indian manufacturers in the defence sector has been liberalized. Defence products list requiring industrial licences has been rationalised and manufacture of most of the parts and components does not require Industrial Licence. The total number of defence licences issued has more than doubled from 215 as on March 31, 2014, to 460 till December 31, 2019, covering a total of 275 companies.

Foreign Direct Investment (FDI): FDI Policy has been revised and under the revised policy foreign investment is allowed under automatic route upto 49% and above 49% through government route, wherever it is likely to result in access to modern technology or for other reasons to be recorded. Significant FDI inflows in the defence and aerospace sectors have been witnessed.

Defence Procurement Procedure (DPP): This was revised in 2016. Specific provisions have been introduced for stimulating the growth of the domestic defence industry. A new category of procurement ‘Buy {Indian-IDDM (Indigenously Designed, Developed and Manufactured)}’ has been introduced in DPP-2016 to promote indigenous design and development of defence equipment. This category has been accorded topmost priority for procurement of Capital equipment. Besides this, preference is being given to ‘Buy (Indian)’ and ‘Buy & Make (Indian)’ categories of capital acquisition over ‘Buy (Global)’ & ‘Buy & Make (Global)’ categories. As a result of the aforesaid initiatives, the Government in the last three years i.e. from 2016-17 to 2018-19 and current year till December 2019, has accorded Acceptance of Necessity (AoN) to 138 proposals worth Rs.2,69,465.26 crore approximately, under these categories of Capital Procurement which promote domestic manufacturing as per DPP-2016.

“Make” Procedure: In February 2018 a separate procedure for ‘Make-II’ sub-category has been notified wherein a number of industry-friendly provisions have been introduced. This effort of the Government to promote industry participation in indigenous development of defence items has yielded an extremely encouraging response. Make-II Procedure for implementation at OFB/DPSUs has also been notified in February 2019. Government has notified the ‘Strategic Partnership (SP)’ Model which envisages the establishment of long-term strategic partnerships with Indian entities through a transparent and competitive process, wherein they would tie-up with global Original Equipment Manufacturers (OEMs) to seek technology transfers to set up domestic manufacturing infrastructure and supply chains.

iDEX: Innovations for Defence Excellence (iDEX) framework, was launched with the aim to achieve self-reliance and to foster innovation and technology development in Defence and Aerospace Sector by engaging Industries including MSMEs, startups, individual innovators, R&D institutes and academia. Indigenisation policy: Government has notified a Policy for indigenisation of components and spares used in Defence Platforms in March, 2019 with the objective to create an industry ecosystem which is able to indigenize the imported components (including alloys & special materials) and sub-assemblies for defence equipment and platforms manufactured in India.

Defence Corridors: Government has decided to establish two defence industrial corridors to serve as engines of economic development and growth of defence industrial base in the country. They span across Chennai, Hosur, Coimbatore, Salem and Tiruchirappalli in Tamil Nadu and Aligarh, Agra, Jhansi, Kanpur, Chitrakoot and Luchnow in Uttar Pradesh. Department of Defence Production has notified 127 items under Public Procurement Order 2017 notified by Department for Promotion of Industry and Internal Trade (DPIIT). The Defence PSUs and OFB are thereby required to give preference to domestic manufacturers while procuring these items in accordance with the said policy.

Testing facilities: The Test facilities/infrastructure available with various Government agencies (OFB, DPSUs, DRDO, DGQA, DGAQA & SHQs) have been made available to private sector with the objective to assist them in design and development of defence systems. The details of test facilities, procedure and other Terms and Conditions are available on websites of respective Government Agencies. An ‘SoP for allocation and utilization of Proof Ranges/Field Firing Ranges for Private Industry’ has also been notified.

Defence Ministry has instituted a new framework titled ‘Mission Raksha Gyan Shakti’ which aims to provide boost to the IPR culture in indigenous defence industry. Defence Investor Cell has been created in the ministry to provide all necessary information including addressing queries related to investment opportunities, procedures and regulatory requirements for investment in the sector. The process for export clearance has been streamlined and made transparent & online. Offset guidelines have been made flexible by allowing change of Indian Offset Partners (IOPs) and offset components, even in signed contracts.