PM Modi said, "Within a span of 15 years, Jharkhand has seen Chief Ministers change ten times. I was the chief minister of Gujarat for 13 years. This stability helped Gujarat to reach great heights." 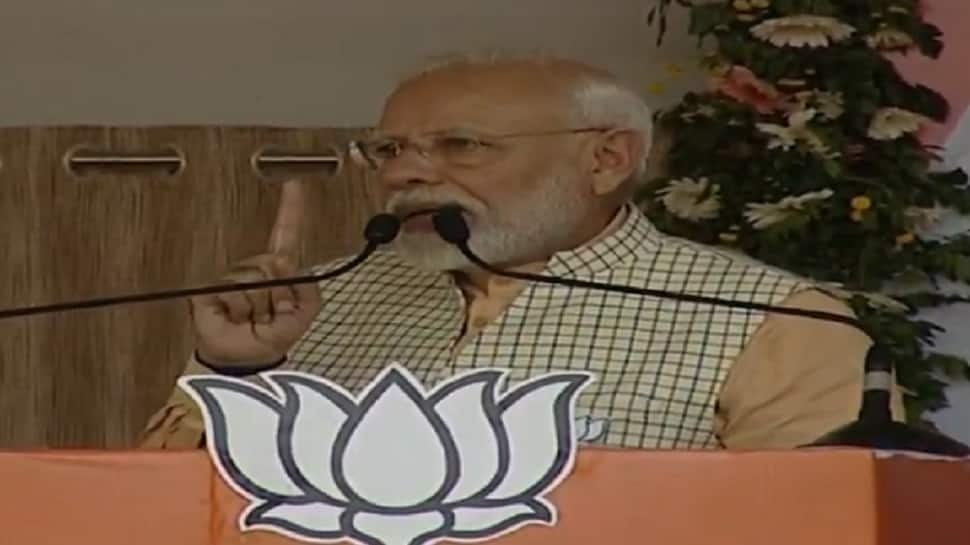 Jamshedpur: Prime Minister Narendra Modi on Tuesday targeted the Congress saying that it followed corrupt practices while in coalition with the Jharkhand Mukti Morcha (JMM). "Today, Jharkhand has a very good reputation in the country and across the world. Five years ago, when the Congress-JMM was in power, there were only reports of corruption and loot. Many top leaders of these parties are still facing corruption cases," said the Prime Minister while addressing a public rally in Jamshedpur.

Days ahead of the second phase of assembly polls in the state, the Prime Minister said that Jharkhand was in the spotlight for being politically unstable when Congress was in power and added "For their selfish motives (Congress) they even made a deal for the Chief Minister`s post. All of you are aware of the games they played here while in power."

PM Modi said, "Within a span of 15 years, Jharkhand has seen Chief Ministers change ten times. I was the chief minister of Gujarat for 13 years. This stability helped Gujarat to reach great heights."

He said, "BJP has put a stop to the instability of governments and for the first time Jharkhand had a stable chief minister for five years" adding that this stability has helped in effectively dealing with Naxalism in the state and as a result, a favourable environment for business has been created in the state.

In his concluding remark, Prime Minister Modi recalled the schemes introduced by the BJP government for the development of the state saying, "A nationwide campaign to open Eklavya Model Residential School in tribal areas was also started from Jharkhand."

Addressing another rally at Khunti earlier in the day, the Prime Minister hailed the BJP government in the state for breaking the backbone of Naxalism.

Modi said, "After the first phase of the Assembly elections in the state, three things are clear - The faith of the people of Jharkhand in strengthening democracy and nation-building is unprecedented," adding "Secondly, the way the BJP government has broken the back of Naxalism, it has reduced the atmosphere of fear and created an environment of development here. Thirdly, it has been made clear that the people of Jharkhand have a feeling of trust towards BJP and the lotus symbol."

The five-phase elections to the 81-member Jharkhand Assembly began on November 30, and will end on December 20, while counting of votes will take place on December 23.

Notably, 20 Assembly constituencies are going to polls in the second-phase on December 7.