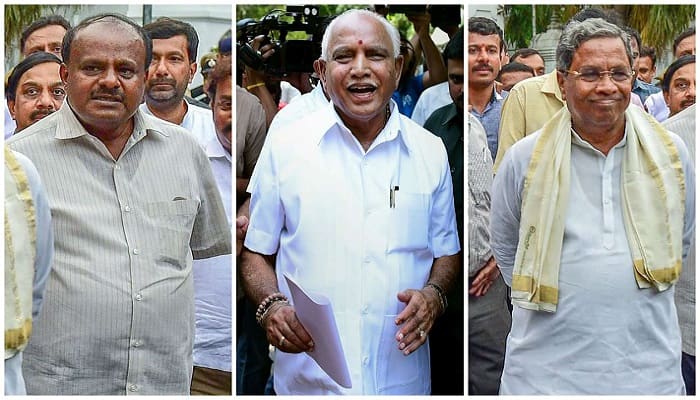 The counting of votes in the crucial byelections to 15 assembly constituencies in Karnataka is set to begin at 8 AM and the result will decide the fate of four-month-old B S Yeddyurappa government. By-elections were held in 15 constituencies on December 5 in Athani, Kagwad, Gokak, Yellapura, Hirekerur, Ranibennur, Vijaynagara, Chikkaballapura, K.R. Pura, Yeshwanthpura, Mahalakshmi Layout, Shivajinagara, Hosakote, K.R. Pete and Hunsur Assembly seats.

Before Yeddyurappa took oath as chief minister, the Congress-JD-S alliance government led by former CM HD Kumaraswamy fell after the resignation of 14 Congress and three JD-S MLAs. All the rebel MLAS were disqualified by the previous Speaker and the bypolls were held on December 5. It is to be noted that Rajarajeshwari Nagar and Maski did not go to polls as election petitions challenging results of the 2018 election are in Karnataka High Court.

BJP, which currently has 105 MLAs in the 225-member House, needs to win at least six seats to retain its majority in the Assembly. The ruling party has the support of an independent MLA too. The Congress has 66 MLAs, JDS 34, BSP 1 and there is one nominated MLA in the House. The Speaker of the Karnataka Assembly also has the right to cast vote.

BJP leaders are hoping to win more than six seats and local exit polls predicted that the BJP will easily win more than six seats. BJP gave ticket to all the rebel Congress and JD-S MPs who had resigned to play an important role in toppling the JD-S-Congress government in the state. On the other hand, the Congress is confident of a better show and it is quite possible that the party would stitch an alliance with the JD-S again to keep BJP out of power.

Over 38 lakh voters, including 19.25 lakh males and 18.52 lakh females, exercised their franchise in these 15 seats. A total of candidates, including 126 independents and 9 women are in the fray in the 15 Assembly segments.

The BJP and Congress contested in all the 15 assembly seats, while the JD-S fielded its candidates in 12 seats. There will be a direct contest between the BJP and the Congress at Athani in Belagavi district, Yellapura in Uttara Kannada district and Hoskote in Bengaluru Rural district.

Delhi factory fire: People in this Bihar village anxiously wait for a call from family members