An entire nation saluted a valiant Abhinandan Varthaman upon his return from Pakistani captivity. 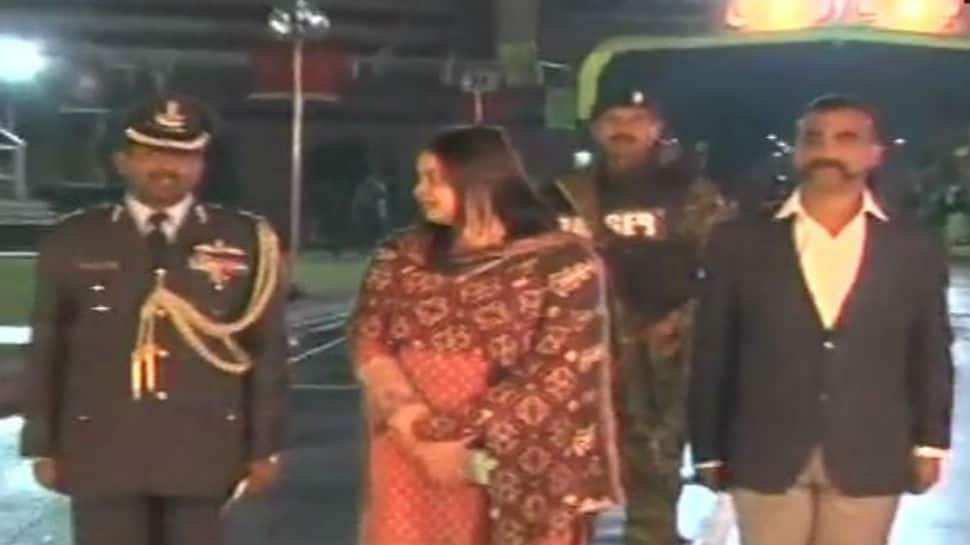 NEW DELHI: Wing Commander Abhinandan Varthaman was released by Pakistan on Friday even as Pakistan stooped down to play the delay tactic.

India had mounted massive pressure on Imran Khan for the release of the IAF pilot. There were scenes of absolute jubilation at the Attari border even before the IAF pilot had officially crossed over.

Security at the border was extremely tight as the Abhinandan was received on the Indian side by top Indian Air Force officials. Among the many who had gathered to welcome the valiant hero were his parents.

Pakistan Prime Minister Imran Khan had on Thursday announced that the captive pilot will be released as a gesture of peace. The 'goodwill gesture' came largely due to the position India took throughout the day to bring its pilot back home and maintained no deals would be made with Pakistan. India also slammed the neighbour nation for violating terms of the Geneva Convention by displaying vulgar images of the injured IAF personnel.

Pakistan detained the IAF personnel Wednesday following a fierce engagement between air forces of the two nations along the Line of Control. Varthaman downed a F-16 fighter jet of Pakistan Air Force by firing an R-73 air-to-air missile before his jet, a MiG 21 bison, was hit by an enemy missile, the sources said.

Here is what happened on Friday (March 1):

Welcome Home Wing Commander Abhinandan! The nation is proud of your exemplary courage. Our armed forces are an inspiration for 130 crore Indians. Vande Mataram!

Abhinandan's first words after crossing the border, according to an IAF official at Attari.

He has been taken to a waiting car in a convoy which will now head to Amritsar. He will then leave for Delhi.

Abhinandan gets a hug from Indian security officials as he walks into India. Pakistan shuts its gate. Absolutely emotional scenes at Attari. 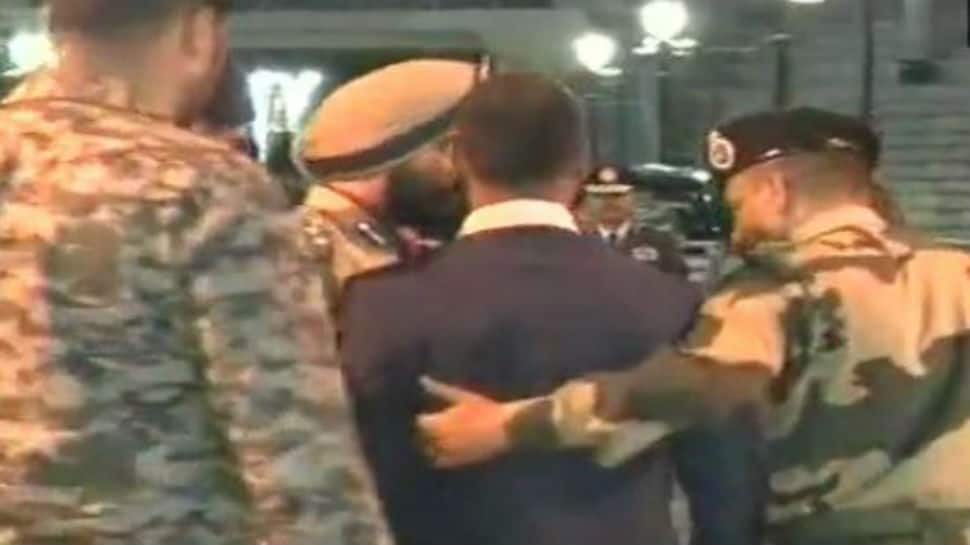 Abhinandan is accompanied by his wife.

Pakistan stoops to new low, turns handover of Abhinandan into a PR exercise.

Abhinandan may have crossed the border and is on Indian soil but his medical checkups are causing a delay in transferring him to Amritsar.

One CRPF personnel has been martyred in an ongoing encounter with terrorists in J&K's Kupwara. Three others are injured.

Abhinandan has been handed over to Indian authorities by Pakistan.

Formalities from Pakistan side for the release of Abhinandan are over.

A team of Indian Air Force personnel will receive Abhinandan.

Abhinandan reaches Wagah border, will cross over to India shortly.

26/11 happened, India expected action against terrorists but nothing happened. When Uri and Pulwama happened, you saw what our brave soldiers did. I salute those who are serving the nation, says PM Modi in Kanyakumari.

PM Narendra Modi at a rally in Kanyakumari: 26/11 happened, India expected action against terrorists but nothing happened. When Uri and Pulwama happened, you saw what our brave soldiers did. I salute those who are serving the nation. pic.twitter.com/qgRBevK9W1

Air Canada resumes flight services to India after a temporary suspension of operations in the wake of India-Pakistan tension, say reports.

A huge crowd has gathered at the Wagah-Attari border to welcome Wing Commander Abhinandan, who is expected to arrive here anytime.

I have flagged off the fastest train Tejas between Madurai-Chennai and the train is a great example of 'Make in India,' having been manufactured in the Integral Coach factory of Chennai itself: PM Modi

PM Modi addresses rally in Tamil Nadu's Kanyakumari, says every Indian is proud that the brave Wing Commander Abhinanadan is from this state.

PM Narendra Modi in Kanyakumari,Tamil Nadu: Every Indian is proud that the brave Wing Commander #Abhinanadan is from Tamil Nadu pic.twitter.com/xUkmAhV5MO

After three days of being in captivity, Abhinandan Varthaman will be handed over to Indian authorities at Wagah-Attari border.

He will be taken to Amritsar air base from where he will fly to Delhi's Palam Technical area.

Following the air strikes by Pakistan, the chiefs of Indian Air Force and Indian Navy will be given Z+ security cover, sources in Delhi Police told Zee Media.

The Beating the Retreat ceremony at Attari-Wagah Border will not be held today.

India had requested to bring back Abhinandan by flight but Pakistan refused to agree: Sources tell Zee News

"I come from land of Mahatma Gandhi, where every prayer ends with the call for Shanti or Peace for all," Swaraj's concluding statements at OIC.

EAM @SushmaSwaraj concluded her address at the Inaugural Session as ‘Guest of Honour’ at Council of Foreign Ministers of @OIC_OCI - first time by India : I come from land of Mahatma Gandhi, where every prayer ends with the call for Shanti or Peace for all. pic.twitter.com/ntyC32y5Fa

“Not attending the meeting is not the solution,” Zardari said in the joint session of Pakistan Parliament. “I suggest the foreign minister attend the OIC meeting. He should go there and talk.”

This is not a clash of civilisations or cultures, but a contest of ideas and ideals. As PM Modi has often said, it is a struggle between the values of humanism and the forces of inhumanity: Swaraj

India has always embraced and found it easy to embrace pluralism since it is embedded in the oldest Sanskrit religious text “The Rig Veda” and I quote "एकं सद्विप्रा बहुधा वदन्ति", which means “God is One but learned men describe Him in many ways": Swaraj.

Wing Commander Abhinandan Varthaman left from Islamabad around 12 pm. He's expected to reach Wagah-Attari border in next two to three hours to reach, around 3 pm. He is accompanied by defence attache and Pakistan diplomats, sources tell Zee News. Before handing over to India, Varthaman's medical tests will be conducted.

He will immediately be shifted to Delhi for debriefing.

India shares much with you.  Many of us have experienced the dark days of colonialism. Many of us saw, the light of freedom and the bright ray of hope at the same time.
We have stood together in solidarity, in our quest for justice and dignity: Swaraj

In the past four years, few relationships have seen as much engagement, or has been so transformed, as India’s relationship with #UAE and, indeed,  with the entire Gulf and West Asia Region. In a sense, it is a return of history.: Swaraj

"Wing Commander Abhinandan Varthaman will cross the border today, can't tell you exact time since there are certain formalities. A senior Indian Air force team from Delhi is here, they will be the ones to receive him," said Deputy Commissioner Shiv Dular Singh Dhillon, Amritsar.

Deputy Commissioner Shiv Dular Singh Dhillon, Amritsar: Wing Commander #AbhinandanVarthaman will cross the border today, can't tell you exact time since there are certain formalities. A senior Indian Air force team from Delhi is here, they will be the ones to receive him. pic.twitter.com/np8iCrCn5h

Hundreds of people flocked the Attari border Friday to catch a glimpse of Wing Commander Abhinandan Varthaman, who is expected to touch home soil after his release from Pakistan.

EAM Sushma Swaraj will address the Organisation of Islamic Cooperation at 1 pm.

External Affairs Minister Sushma Swaraj at the foreign ministers' meet of the Organisation of Islamic Cooperation (OIC) in Abu Dhabi. She will shortly address the session as the Guest of Honour. pic.twitter.com/petmBhEidg

Wing Commander Abhinandan's parents - Air Marshal (retd) S Varthaman and Dr Shobha Varthaman - were given a standing ovation as passengers made way for them in the early hours of Friday, ensuring that they couple gets off first. Read here.

"I will not attend Council of Foreign Ministers as a matter of principle for having extended invitation as a Guest of Honour to Sushma Swaraj," says Qureshi.

The rising tensions between India and Pakistan following the Pulwama terror attack and the Indian airstrikes and thereafter are unlikely to have an impact on the discussions over the Kartarpur corridor, sources said on Friday. India has confirmed that officials from both the countries are meeting to decide on the modalities of Kartarpur corridor. "It concerns the sentiments of a community, we welcome Pakistani delegation for the talks," sources told Zee media.  Read more

BJP President Amit Shah Friday said creating a situation for the return of Wing Commander Abhinandan Varthaman from Pakistan was a diplomatic victory, ahead of the expected arrival of the captured pilot.

6 Jamaat-e-Islami activists were detained by the police during fresh raids in various villages of Tral in south Kashmir's Pulwama district on Friday.