As per the latest trends, West Bengal CM Mamata Banerjee's party TMC has taken a massive lead and the ruling party is way ahead of the BJP in Bengal. The Trinamool Congress has crossed the 200-mark in the 294-seat assembly and looks set to a third straight term in West Bengal. The ruling TMC is currently leading in 205 seats, while the BJP is leading in 85 seats at 2 PM. 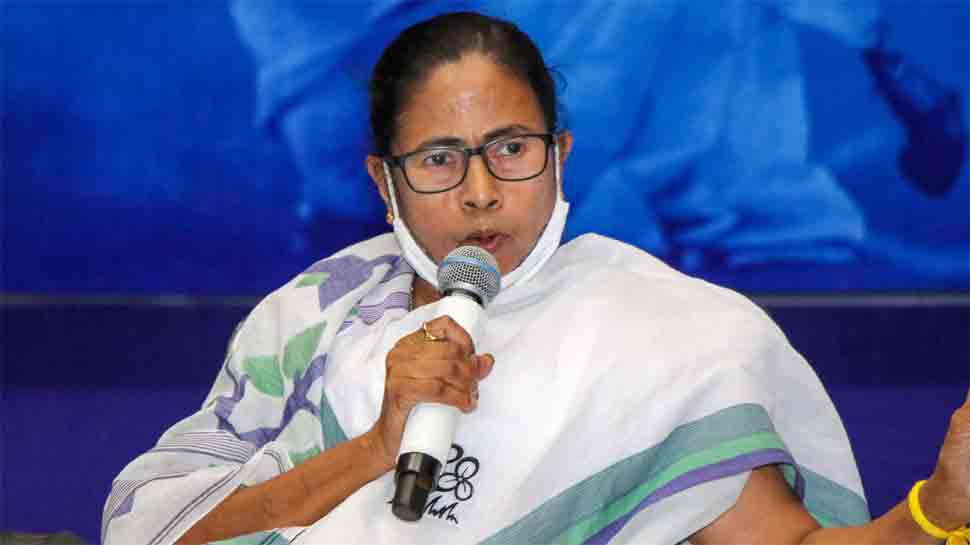 Kolkata: Belying all expectations, the TMC was headed on Sunday (May 2) for a landslide victory in assembly elections, overcoming the might of the BJP after a bitter campaign that had turned into a virtual duel between Chief Minister Mamata Banerjee and Prime Minister Narendra Modi. By evening the trends were clear. Banerjee's Trinamool Congress had won or was leading in 216 (93 wins and 123 leads) out of 292 constituencies which went to the polls with some 48 per cent of the votes counted so far. Polling was countermanded in two constituencies after candidates fell victim to a raging Covid-19 pandemic.

In Assam, the saffron party is all set to retain power in Assam. The party's state chief Ranjeet Kumar Dass said the BJP-led alliance is committed to develop all the communities of the state with blessings of the people. Meanwhile, Congress's Assam president Ripun Bora resigned after the party's defeat in the state elections.

The much-awaited results are being updated every minute on the Election Commission of India's website - https://results.eci.gov.in.

Mamata Banerjee’s Trinamool Congress (TMC) is seeking to seize power for the third consecutive term in the state, where it was locked in a high-octane contest with the BJP.

The power-packed campaigns by the main contenders - the Trinamool Congress and Bharatiya Janata Party (BJP), involved rallies with large participations and mega roadshows. The third front i.e. the coalition of the Congress, Left Front and Indian Secular Force seemed to be on the back foot when it came to campaigning.

The ambitious BJP did intense campaigning with the goal to topple the incumbent TMC government in the state. To continue its stride in Bengal especially after an overwhelming result in the 2019 Lok Sabha polls in the state, the party brought Prime Minister Narendra Modi, Union Home Minister Amit Shah, party president JP Nadda and many others for campaigning. ‘Tolabaazi’’ (extortion), `cut money`, syndicate raj and appeasement politics were a few topics over which the BJP targeted the ruling TMC.

Mamata chose Nandigram over her home turf Bhabanipur seat this time to test her fate in the 2021 elections. Now not just Bengal, but the country`s eyes were on Nandigram that witnessed the most high-profile contest on April 1 with the chief minister taking on her former ministerial colleague Suvendu Adhikari, who had joined the BJP in December last year. However, in a setback to the Bengal CM, she lost the seat by a margin of over 1700 votes to Adhikari, her former protege.

Several exit poll surveys gave an edge to the ruling Trinamool Congress (TMC). In West Bengal, all exit polls predicted that the BJP would make major inroads and a few also said that the party would emerge victoriously.

The saffron party had scripted history by winning the traditionally Congress-dominated state in 2016, after remaining on the fringes. In the northeastern state of Assam, the Bharatiya Janata Party (BJP) appeared ahead in the exit polls and after the Sunday votes counting, the lotus is all set to bloom for the second consecutive time in the state. All major pollsters have predicted a majority for the National Democratic Alliance (NDA) in the 126-member Assembly.

As per the Zee News Maha Exit Poll, the BJP+ was leading on 79 seats, while the Congress-AIUDF alliance was ahead only in 46 of the 126-seat legislative Assembly. Given these trends, it is clear that the BJP headed by chief minister Sarbanand Sonowal faced neither anti-incumbency nor rejection over the Citizenship Amendment Act (Act) from the electorate.

This is all for the day. Thank you for staying with Zee News for latest updates from across the country. Do come back on Monday (May 3) for more updates.

Breaking: BJP leader Suvendu Adhikari, who won from Nandigram against Mamata Banerjee, was on Sunday evening attacked in Haldia by unidentified assailants. Adhikari was attacked while he was coming out from a counting centre.

My sincere thanks to the great People of Nandigram for their love, trust, blessings, and support, and for choosing me as their representative and the MLA from #Nandigram. It is my never-ending commitment to be of service to them and working for their welfare. I am truly grateful!

Result is not as per our expectations; We couldn't achieve our target, but still we have improved our position. We humbly accept mandate and will play role of constructive opposition: BJP's West Bengal unit chief

Congratulations to Mamata Didi for @AITCofficial's win in West Bengal. The Centre will continue to extend all possible support to the West Bengal Government to fulfil people’s aspirations and also to overcome the COVID-19 pandemic. @MamataOfficial

Amid Nandigram seat trends and several reports speculating that BJP's Suvendu Adhikari has won from the constituency, the official Twitter handle of Trinamool Congress tweeted, "The counting process for Nandigram has not been completed. Please do not speculate."

Mamata thanks all voters, says will approach Supreme Court against what Election Commission did to them during poll campaign

Don't worry about Nandigram, I struggled for Nandigram because I fought a movement. It's ok. Let the Nandigram people give whatever verdict they want, I accept that. I don't mind. We won more than 221 seats & BJP has lost the election: West Bengal CM Mamata Banerjee

We are grateful to the people for this landslide victory. I have to start working for COVID19 immediately. The swearing-in will be a low-key event because of the prevailing COVID19 situation: West Bengal CM Mamata Banerjee

I accept Nandigram result. I want to say that forget what happened in Nandigram and remember that Trinamool Congress has won Bengal. This win has saved people of Bengal. This is victory of democracy, victory of Bengal people and victory of country. The Bengal result is a landslide victory despite all odds stacked up against us: Mamata Banerjee

While the Election Commission is yet to confirm Mamata's win from Nandigram seat, sources are claiming BJP leader Suvendu Adhikari has won Nandigram by almost 1622 votes. An official confirmation remain awaited.

"I would like to thank everyone. I request all to not take out victory processions. I urge everyone to go back to their homes now. I will address the media after 6 pm."

Violence breaks out in West Bengal on vote counting day

Bengal Chief Minister Mamata Bannerjee, who won the Nandigram constituency in the assembly election 2021, is likely to pay a visit to the Kalighat temple in a while.

The last round of counting of votes in the Nandigram assembly seat concludes. The Election Commission is yet to announce the result of the seat in which Trinamool Congress supremo Mamata Banerjee and BJP leader Suvendu Adhikari were pitted against each other.

"Mamata Banerjee has sent out a clear message that Prime Minister Narendra Modi ji and Home Minister Amit Shah ji are not invincible. They can also be defeated."

Bengal CM and Trinamool supremo Mamata Banerjee is ahead of her BJP rival Suvendu Adhikari by 820 votes in Nandigram seat as counting of votes for 17th round is underway.

Shiv Sena leader and MP Sanjay Raut has expressed confidence that Mamata Banerjee will form the next government in West Bengal, as Trinamool Congress surged ahead of the BJP in the counting of votes for state assembly elections.

Counting on Nandigram seat continues, all eyes are set on the 17th and the final round of counting. BJP leader Suvendu Adhikari is now leading by 6 votes against Bengal Chief Minister and Trinamool Congress supremo Mamata Banerjee

West Bengal Chief Minister Mamata Banerjee is trailing by 6 votes against her former close aide and BJP rival Suvendu Adhikari after the end of 16 rounds of counting of votes in the Nandigram seat.

CM Mamata Banerjee is still ahead of her former close aide and BJP rival Suvendu Adhikari after 16 rounds of counting of votes in the Nandigram seat.

Trinamool Congress secretary general Partha Chatterjee says trends available for 284 seats indicate that the people of West Bengal have given a befitting reply to the repeated "attacks" on Chief Minister Mamata Banerjee.

NCP chief Sharad Pawar congratulates Mamata Banerjee, calling the TMC's performance a “stupendous victory”. “Congratulations @MamataOfficial on your stupendous victory! Let us continue our work towards the welfare of people and tackling the Pandemic collectively,” he wrote on Twitter.

Incumbent Assam Chief Minister Sarbananda Sonowal, who is leading by a good margin from Majauli, has said that "the BJP will form the government". "It is all happening because of the people of Assam. Trends are in our favour," he said.

Celebrations erupt in West Bengal. TMC supporters celebrate at Kalighat, Kolkata as their party leads on 202 seats, as per official trends.

CM Mamata Banerjee is trailing in Nandigram by over 8,000 votes to BJP's Suvendu Adhikari as of now

Trinamool’s Becharam Manna is leading in the Singur constituency, according to initial trends. Since 2001, the seat was held by Rabindranath Bhattacharjee, who moved to the BJP ahead of the election.

As we take a large lead in the seats in early counting, I urge all @BJP4Assam Karyakartas to refrain from crowded celebrations as mandated by @ECISVEEP & endorsed by @BJP4India Nat'l President @JPNadda Ji. Let us be humble & maintain Assam's excellent track record managing #covid