Chirag earlier said he would go all out against the JD(U) only, but later pitted nearly half-a-dozen candidates against the BJP. 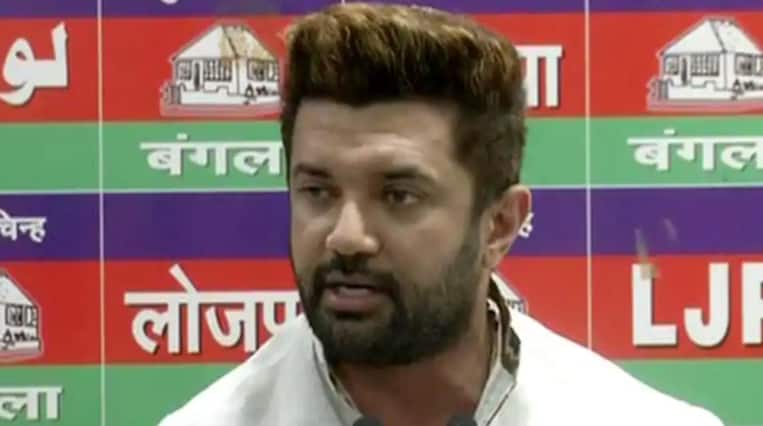 New Delhi: Major exit polls are giving Tejashwi Yadav-led ‘Mahagathbandhan’ an edge over Nitish Kumar-led NDA alliance after the conclusion of the three-phase Bihar assembly election 2020, but the role of Lok Janshakti Party (LJP) chief Chirag Paswan is also being considered crucial if no alliance is able to get a clear majority when the final results are announced on November 10.

The LJP, which broke away from the NDA in Bihar, is threatening to play spoilsport for the Nitish Kumar-led alliance in the state. The LJP chief, Chirag Paswan appears to have dented the NDA votes, especially of the JD(U), whose leadership was seen asking in poll rallies that "every vote cast in favour of the Chief Ministers party will be a loss for Bihar's future".

Notably, the majority of exit polls predicted the ‘Mahagathbandhan’ wining between 120-130 seats, while the NDA to win between 104-110 seats. Chirag Paswan's LJP is expected to win between 4-8 seats and is likely to emerge as a kingmaker if no party wins a majority in Bihar.

Tejashwi Yadav-led RJD is part of the Mahagathbandhan alliance comprising its old ally, the Congress, besides the Left parties.

Tejashwi Yadav's statement was, in fact, an invitation to Chirag Paswan while looking at the uncertain political situation in the Bihar Assembly poll outcome. The day appears to have come when both the youth leaders may come close in the post-poll alliance.

Chirag Paswan had voiced strong displeasure over the use of the term 'vote katua' for his party by some BJP leaders probably to keep Nitish Kumar happy. Chirag had asserted his party will win more seats in the Bihar assembly polls than the JD(U).

Several top BJP leaders, including Prakash Javadekar and Bihar Deputy Chief Minister Sushil Kumar Modi, had called LJP a 'vote katua' in the Bihar election fray. They also accused the LJP chief of creating confusion in the minds of the electorate by claiming close proximity to Prime Minister Narendra Modi. Chirag repeatedly stated his unflinching loyalty to PM Modi, saying he was like 'Hanuman' to the prime minister.

Initially, Chirag said he would go all out against the JD(U) only, but later pitted nearly half-a-dozen candidates against the BJP. This included the Raghopur seat where BJP's Satish Kumar challenged Tejashwi Yadav, thereby, extending the advantage to RJD by splitting the anti-RJD votes.

Chirag also hit out at Nitish Kumar over the implementation of prohibition laws in the state, accusing the CM of gaining from smuggling of liquor into the state. The LJP chief also alleged corruption in Nitish Kumar's 'Saat Nishchay' scheme and said if voted to power he will get it probed and send to jail those found guilty, including the chief minister.

What will LJP chief Chirag Paswan do after the announcement of final results on November 10 will also decide his role in the politics of Bihar?