The poster takes a swipe at the ruling BJP over the ongoing Rafale fighter jet deal row. 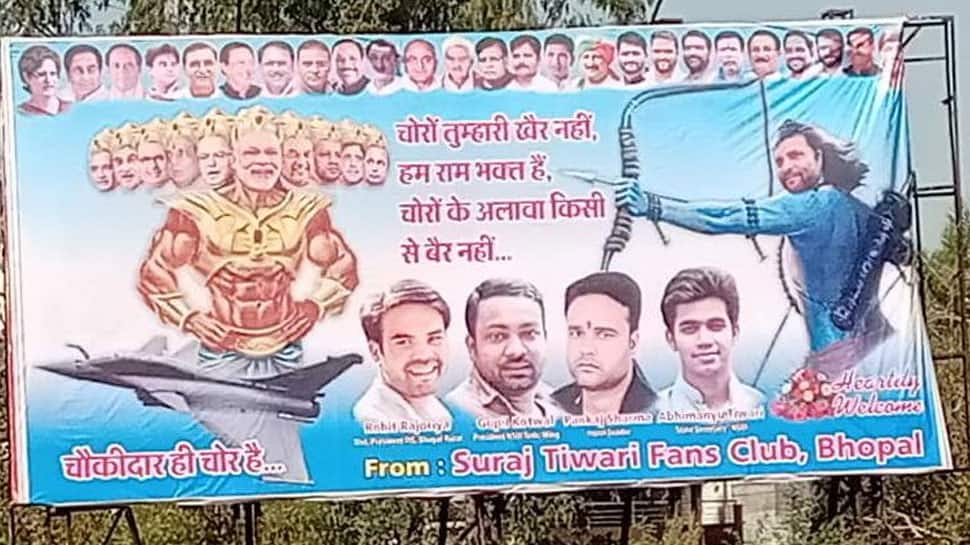 BHOPAL: In the latest addition to the ongoing poster war between the country's two leading political parties, a new poster has surfaced in the Madhya Pradesh capital Bhopal showing Congress chief Rahul Gandhi as Ram and Prime Minister Narendra Modi as the ten-headed demon king 'Ravana'.

The picture of the poster, shared by the news agency ANI, also takes a swipe at the ruling BJP over the Rafale fighter jet deal row.

In the poster, PM Modi has been seen flying on top of a Rafale jet carrying a caption: '' watchman is the thief.''

The poster, believed to have been put up by Suraj Tiwari Fans club, carries pictures of several top rung leaders of the Congress party.

The poster further reads: Thieves your days are numbered, we are Lord Ram's devotees, we have no problems other than the thieves.

This is not the first time that posters targeting the top leaders of the two parties have come up in various cities ahead of the crucial Lok Sabha election.

A poster portraying Rahul Gandhi as ''Lord Ram'' had come up in Bihar's capital Patna sometimes back.

According to news agency ANI, the posters were put up by local Congress workers.

Interestingly, the pictures of all top party leaders, including former Congress chief Sonia Gandhi, Rahul Gandhi's sister and newly-appointed party general secretary Priyanka Gandhi Vadra, former Prime Minister Manmohan Singh and many others, have also been included in the posters.

In an apparent dig at the ruling BJP, which is known for its 'Hindutva' stand, the posters read: ''They (BJP) kept chanting Ram-Ram, You (Rahul) live like Lord Ram.''

The posters also talk about the upcoming Congress rally - Jan Akansha Rally - which is scheduled to be held at Gandhi Maidan in Patna on February 3. The rally is expected to be addressed by Rahul Gandhi and top party leaders.