Live Updates: PM Modi to set up panel on 'one nation, one election' proposal

Prime Minister Narendra Modi on Wednesday chaired an all-party meeting and said that a committee would be set up to examine 'one nation, one election' proposal. 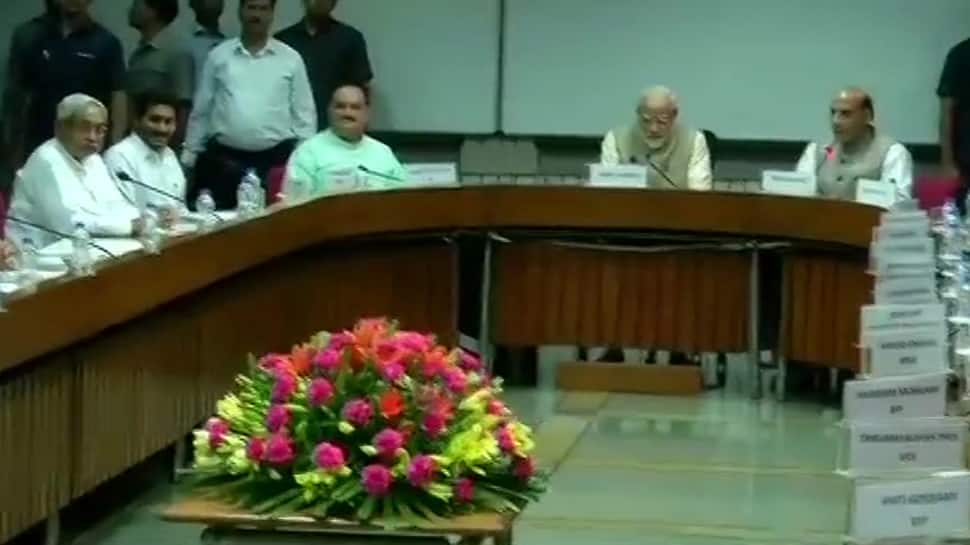 Prime Minister Narendra Modi on Wednesday chaired an all-party meeting and said that a committee would be set up to examine 'one nation, one election' proposal. The meeting with heads of all parties who have an MP either in the Lok Sabha or the Rajya Sabha also discussed the celebration of the 75 years of Independence in 2022 and 150 years of Mahatma Gandhi's birth anniversary this year.

# Going against Congress' official stance, party's Mumbai unit president Milind Deora extended his support to the idea of 'One Nation One Election' floated by the Modi government. Taking to Twitter to express his “personal views”, the 42-year-old politician says, “As a former Member of Parliament and someone who has contested four elections, I believe that being in continuous election mode is a roadblock to good governance, distracts politicians from addressing real issues and adds populism to the character of governance which is not necessarily a long-term solution to some of the gravest problems Indians face.” Read more here.

#  Prime Minister Narendra Modi will set up a committee for giving "time-bound" suggestions on the issue of 'one nation, one election', Defence Minister Rajnath Singh Wednesday. Addressing mediapersons after the all-party meeting on the issue, Singh said most parties supported the idea of holding simultaneous polls to Lok Sabha and state assemblies. He said though parties such as the CPI and the CPI-M had "difference of opinion" on how the exercise of joint elections will be held, they were "not opposed (to the idea)". Asked about the composition of the proposed committee, Singh said the prime minister will take a call.

# “On behalf of CPI (M), we presented our views on five issues,” says Sitaram Yechuri. “We're in favour of Mahatma Gandhi's 150th Jayanti, but checks should be placed on people supporting Godse. We appreciate 'Sabka Vishwas' slogan. We'd opposed 'one nation one election' in 1952 and 1957 too. It executed forcefully, it will be an anti-democratic and anti-federal move.”

“Sharad Pawar has supported our stand. The truth is, this government wants to move towards a presidential form of Government,” he added.

# Samajwadi Party Chief Akhilesh Yadav has given the meeting a miss saying that a proposal like 'One Nation One Election' cannot be acceptable. "They should focus on the promises they have made to people, we hope they will work more on fulfilling those promises. Decisions like One Nation One Election, there are many parties that will never agree to it," he said.

# The meeting of heads of political parties, chaired by PM Modi, has begun in Parliament.

# OP Birla on his first Parliament session as the Lok Sabha Speaker: Will work by taking everyone together, gaining everyone's trust. To maintain the dignity of the constitutional post, the speaker should be unbiased, and must also appear unbiased in conduct.

# Lok Sabha has been adjourned for the day.

# As per protocol, PM Modi on Wednesday introduced Cabinet ministers and Council of Ministers to the Lok Sabha on the first day of the session after the formation of the new government. It is a customary practice for the prime minister to introduce the council of ministers after the new government takes over or if there is a reshuffle or expansion of the union cabinet. The PM read out names and portfolios of the ministers who stood up and greeted the members of House with folded hands.

# Congress has said that it will not be attending the all party meeting. West Bengal Chief Minister Mamata Banerjee had also excused herself from the meeting and asked the government to prepare a white paper on 'one nation, one election' instead of doing it "hurriedly".

# Delhi CM Arvind Kejriwal is also unlikely to attend and the Aam Aadmi Party (AAP) would be represented by party member Raghav Chadha, who was fielded from South Delhi constituency in the recently held Lok Sabha polls.

# BJP MP Om Birla has been elected the Speaker of the 17th Lok Sabha. He was elected unopposed after Congress-led UPA backed his candidature in the election on Wednesday. Congratulating Birla, the PM said: "It is a matter of great pride for the House and we all congratulate Om Birla Ji on being unanimously elected as the Speaker of the Lok Sabha. Many MPs know Birla Ji well. He has served in the state of Rajasthan as well."

"Personally, I remember working with Om Birla Ji for a long time. He represents Kota, a place that is mini-India, land associated with education and learning. He has been in public life for years. He began as a student leader and has been serving society since then without a break," he said.